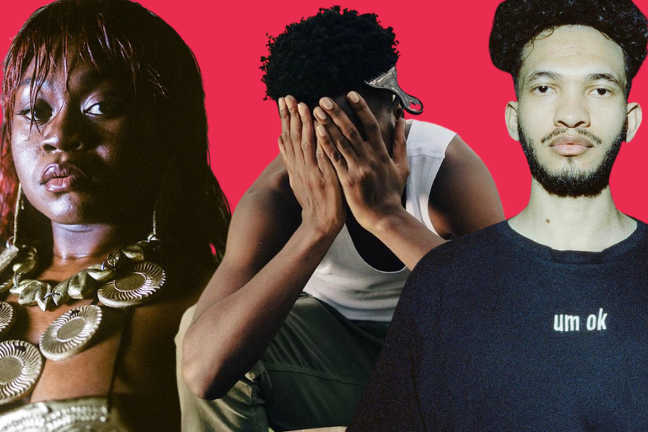 Here are the best releases from our New Hip-Hop Videos From Aus playlist this week; as always, highlighting the latest and best videos year-round from across the AU. Don’t miss out! Subscribe to our channel to be the first across the hottest new clips. Here are a few of our weekly favs but there are hundreds to watch in our Youtube playlist! Which video are you into this week? Slam the comments with who we missed…

Blessed announces his debut album with the arrival of his new single ‘Love Yourself’, via Matt Corby’s Rainbow Valley Records. With countless mixtapes and EPs under the Sydney-based artist’s belt, he’s been a pivotal figure within Australia’s hip-hop scene for over a decade. Recent releases including ‘No Changes’, ‘Down Under’ featuring Baby Prince and now the uplifting message of ‘Love Yourself’, hint at the new heights the Ghanian-Australian will ascend to on his debut album AUSSIE BLACKSTAR, set to release on June 3. Equipped with a music video directed by Trav Leslie, the pop-rap track finds Blessed offering words of self-love over guitar plucks and trap drums.

Sampa The Great enlists the prowess of Denzel Curry and production from Powers Pleasant on ‘Lane’. After recently becoming the first Zambian act to perform at Coachella, the Botswana-raised artist has returned with her second release this year following her collaboration with sister Mwanje on ‘Wild Ones’. Sampa sings vocoded harmonies and joins Denzel in delivering punchy bars over the rising organs and bass-heavy trap beat of ‘Lane’. Directed by Rochelle Rhembard and Imraan Christian, the music video begins with ‘Origin’, a spoken-word piece preluding to the new era she’s nourished since relocating to Zambia during the pandemic.

Baby Prince waves his flag high in his triumphant first solo single of the new year, ‘Zimbabwe’. The Brisbane-based artist started 2022 by jumping on two of the best recent releases including Mason Dane’s ‘Pretty Pearl’ and Blessed‘s ‘Down Under’. In the first half of the Liam Thomas and Uno Stereo-produced track, Baby Prince raps over the game-ready horns and victorious trap beat before sliding into more melodic and soulful sonics. Directed by Baely Strahl and Caio Bindi, the music video cuts from B&W visuals on the basketball court to sun-kissed shots in more humble surroundings as  he exclaims: “I flew in from Zimbabwe, young, black and Australian.”

After their explosive breakout year in 2021, 1300 share their debut mixtape and visuals to its eponymous track, ‘Foreign Language’. Already proven in one of their earlier singles like ‘No Caller iD’, the Korean-Australian collective – comprised of Rako, Dali Hart, Goyo, Nerdie and Pokari Sweat – is one of the most exhilarating and refreshing acts to emerge. ‘Foreign Language’ is a short and sharp showcase of their bilingual bars and energetic flows in the hilarious and distorted music video directed by Raghav Rampal. Foreign Language spans across 13-tracks including ‘Rocksta’ and ‘Oldboy’, and features Agung Mango, Qim Isle and Raj Mahal.

Brisbane-based artist S.A.B releases his self-produced debut EP and visuals to the title track, ‘Black Noise’ featuring Sachém. The eight-track project explores S.A.B’s experiences as a Bla(c)k adolescence and offers a powerful commentary, influenced by works from Kendrick Lamar, Saba and local favourites like JK-47 – “My Black Noise is different to the next person’s Black Noise, but as our lives move forward, somewhere along the way our frequencies cross-over”. The music video, directed by Que Film Collective and the South-African born artist, follows S.A.B and Sachém recounting times they were racially profiled, judged or mistreated in the proud, bouncy and bass-driven single.

The last of the three title track visuals this week, Yibby drops the ‘Tangent’ music video from his 2021 EP. For fans of Isaiah Rashad and Capital Steez, the Sydney-based artist’s phenomenal eight-track project features Arno Faraji, Chanel Loren, Lord Apex and Black Josh. Along with its predominately B&W music video directed by Joseph Wells and shot Don Parkinson, ‘Tangent’ finds Yibby with a lyrical laser-sharp focus on the distorted synth production of Clockwork Odyssey. While the visuals are the first we’ve seen of Yibby in 2022, ‘Tangent’ serves as a reminder of his undeniable talent and confidently-executed sound.