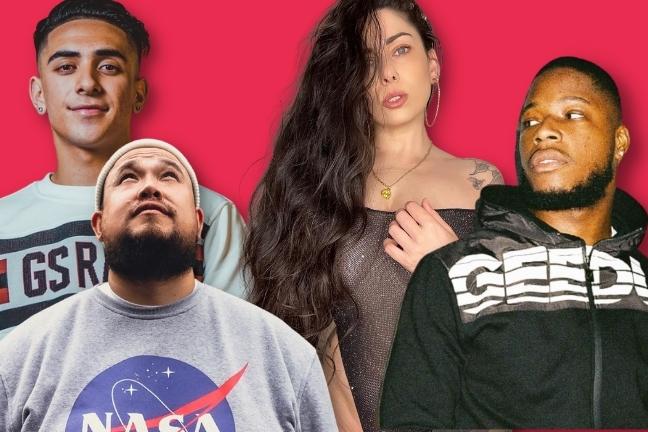 Rounding-up half a dozen visuals via our New Hip-Hop Videos From Aus playlist; as always, highlighting the latest and best videos year-round from across the AU. Don’t miss out! Subscribe to our channel to be the first across the hottest new clips. Here are a few of our weekly favs but there are hundreds to watch in our Youtube playlist! Which video are you into this week? Slam the comments with who we missed…

Jaecy announces his debut project Movin Groovin with his first release of the year, ‘Credentials’. In the last 12 months, the Bankstown artist has dropped some of his strongest solo efforts and collaborated on hits with A.Girl, Creed Tha Kid, Jalmar and more. On ‘Credentials’, it sounds like producer Xnywolf frankensteined an old Western film with Sydney drill while Jaecy delivers his bars in effortless conviction. The intoxicating music video is directed by Kev Blindside and features psychedelic edits and fast transitions between shots. The Area Movement affiliate shared the mixtape’s release date and name in the MV’s final moments, revealing his Moving Groovin mixtape will be out March 30.

Brisbane artist AMUthaMC debuts 2022 with another victorious anthem, ‘Blockstar’. Returning over the smooth bassline, sincere piano chords and trap production of DIMES, AMU performs somewhat of a sequel to his 2020 hit, ‘My Team’. The new Forest Lake anthem similarly emphasises the values of loyalty, hard work and legacy building – “Cause there’s a star on the block! I’ve been grinding since a young g, now outside my area they love me.” ‘Blockstar’ gets all the boys together including his brother Nokz78, for the music video directed by YISSA. It’s been two years since his first release ‘Some Nights’, and his latest offering might be his best yet.

Blessed delivers “the anthem for the new Australia” in his pop-rap cut ‘Down Under’ featuring Baby Prince. Having already made a powerful debut to the new year in ‘No Changes’, the Sydney-based artist is quickly cementing himself as the country’s biggest rap star in 2022. Recently signing to Matt Corby’s label Rainbow Valley Records, ‘Down Under’ is the world’s perfect melodic introduction to the noise coming from the AU. Produced by yungxansei, whose credits include NLE Choppa and Wale, Baby Prince slides in with a boastful verse referencing his home city Brisbane. Directed by Jon Baxter, the music video was filmed in Broken Hill at the historic Silverton Hotel.

The Melbourne-based trio of GMC, Johnny Narcotics and Kiddo release visuals to the eponymous track of their collaborative tape, Touching The Sky. The two emcees in GMC and Kiddo drop party-ready bars over Johnny Narcotics’ production, with the hook ringing – “I just want to smoke, keep that energy alive.” The Rhys Gadsby-directed music video films them in various shots across Melbourne both during sunset and the city’s nightlife. ‘Touching The Sky’ is the first song from the 8-track project that includes previously released single ‘Pussy Magic’ and standout moments like ‘Smoke’ featuring Adrian Swish and Ezra James.

Sydney’s DJ Discretion promises to take you ‘Higher’ with a new record featuring Biordi Music labelmates, JKING and Billymaree. Recruiting the Brisbane melody-maker and Mount Druitt vocalist, DJ Discretion has produced a stimulating Caribbean-influenced late night single, mixed and mastered by BeatsWithSheph. The honeyed vocals, poised performance and sultry and sweet lyrics of both singers aid Discretion in his 2022 debut following ‘Look At Me Now’ featuring Lisi and Shely210 last year. ‘Higher’ dropped with a music video filmed and edited by Cerne Studios, including shots of each artist in their moment of the limelight and then united for the single’s climax.

Up-and-comer Yung Guapo hits One For The Road to share a new track, ‘Never Know’. Produced by KUDA, the Melbourne artist poses in front of a white BMW, introspectively rapping over the pensive piano trap instrumental – “I gotta make sure that my family eat, got some sister, brothers, yeah you know they depend on me.” The visuals were premiered by TMC Media and showcase lyric edits as Guapo drops melodic street bars with Hoodie4L as his hype man. While new tracks from the young African-Australian artist are few and far between, ‘Never Know’ hopefully is the start of a larger rollout of releases.