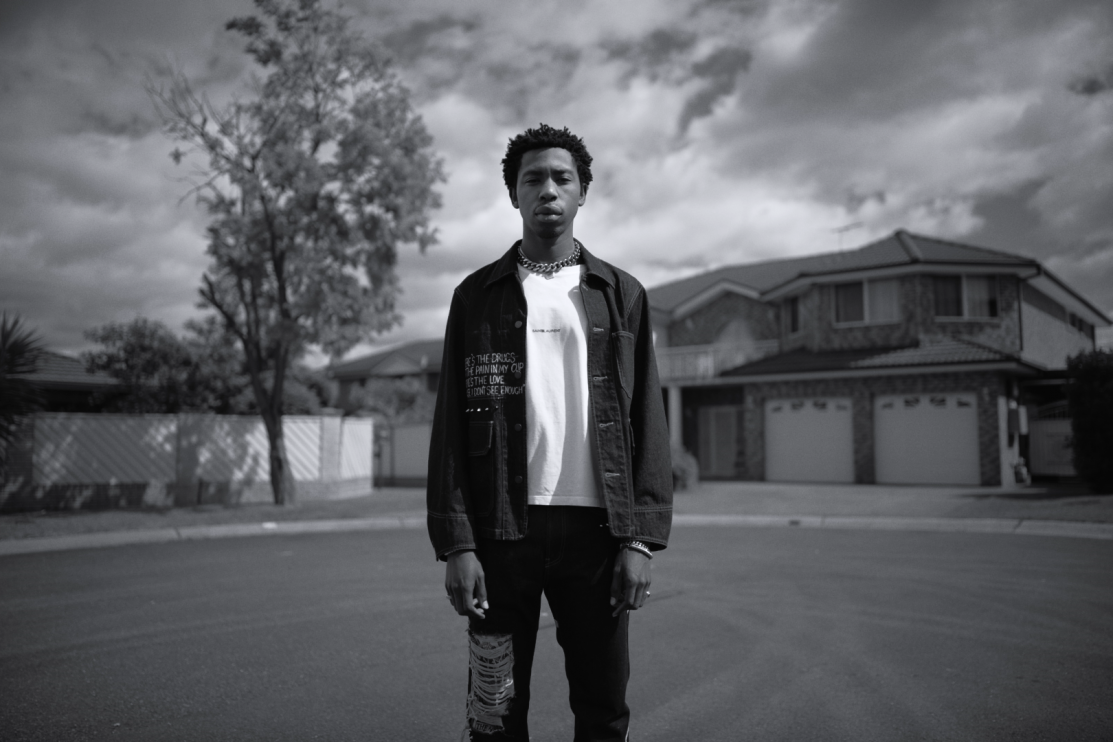 Ghanaian-born and Sydney-based BLESSED is an artist in every sense of the word.

The recent signee to Matt Corby‘s new label Rainbow Valley Records is a rapper, singer, producer, songwriter, entrepreneur, and seasoned vet within the Australian music industry. He’s started off the new year with a bang, adding to ‘No Changes’ – a beautiful and moving reflection on our current society – to his already stacked discography.

First established under the moniker Miracle, he signed to Sony Music Australia as a teenager making mainstream pop-rap party songs. In the early 2010s, the local hip-hop scene was still only in its infancy and lacking the diversity we see today, meaning for young artists like BLESSED, local inspiration was hard to come by.

“The young kids kicked down the door and made it their own industry.”

Among the next generation of rising talent, he found refuge in artists like B-Wise and his group K1, one of the only African-Australian acts bringing street culture to the mic without industry support. As he gained the experience, tools and knowledge, he “learnt how to float, how to swim” until eventually “building his own raft” and branching out sonically to evolve into BLESSED. Letting his Ghanaian roots shine proudly through his music, being a beacon of hope to people is what keeps him on his toes today.

Since he debuted, he’s had the music game in the palm of his hand. From writing credits for Justice Crew to producing for some of Sydney’s best including B-Wise, Manu Crooks and The Kid Laroi, his impact on Australian music is as far as the eyes can see.

“I’m not following what the machine thinks I should be doing because at the end of the day, music is art and I’m a very artistic person.”

In a recent interview with AUD’$, he explained that music was his therapy. He describes his new single ‘No Changes’ as a “direct message that resonates with everyone on different levels.” Through his raw, uncut and poetic perspective, he encourages unity while vulnerably shedding light on his mental state, hoping that everyone can see each other’s struggles through an empathetic lens after the difficult last few years. The sombre track touches on racism and targeted police brutality, highlighting the constant struggles and frustrations of minorities in Australia and worldwide.

“We’re all a part of a struggle. It’s not the same, we’re not all on the same level of struggle but we all understand and connect and resonate with the fact that life is hard and we’re all going through it in some way, shape or form.”

As an OG and inspiration to the youth, his journey through the industry is an important lesson for rising musicians while his music is able to heal and unite, evident in his powerful and timeless new record. Looking ahead at the legacy he intends to leave, BLESSED is determined to nurture local talent and set up the “infrastructure that will help launchpad artists straight to where I think they should be and where they deserve to be.”

“I’m here to make music and I’m going to continue to make the best music I can and try to inspire the next generation to do the same.”

Watch the full interview between Matthew Craig and Blessed below via our YouTube channel where he talks about letting his culture and identity shine, the stand-out moments of his career and his favourite Australian artists. Also, catch him in a quick round of AUD’$ Rapid Fire answering his dream collab, his favourite place to spend a bag and his biggest celebrity crush. Be sure to let us know if you’re vibing with the interview!