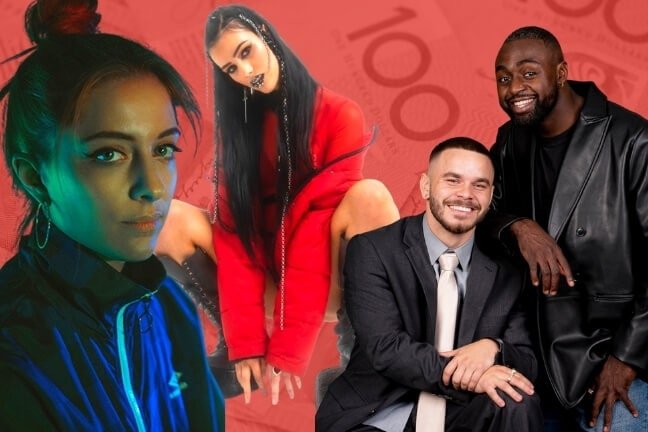 Four months down in 2021! Here’s out Week 16 favourites from the New Hip-Hop Videos From Aus playlist on Youtube. Subscribe and keep up to date with all the latest video drops from the AU. Dive in the comments and let us know which clips you’re feeling the most.

Introducing Sydney’s first K-Rap crew 1300, and their ice-cold next track, ‘No Caller iD’. Along with the effortless bars in both English and Korean, ‘No Caller iD’ features an impressively evolving and sci-fi-influenced instrumental. This exciting new outfit consists of Rako, Dali Hart, Goyo, Nerdie and PokariSweat. Following up their January released track titled ‘Brr’, 1300 have turned it on once more with versatile flows and a light-hearted, Korean gangster movie styled music video by A Videohead Production. Watch this crew closely.

Two of Australia’s most dynamic voices, Tasman Keith and Kwame team up for fast-paced face melter ‘ONE’. The track finds Keith and Kwame delivering a flurry of brash bars, taking aim at particular industry standards that feel outdated to the duo. The pair have previously collaborated with Kwame lending a production hand to ‘THESE DEVILS’ on Keith’s 2020 mixtape, ‘TO WHOM IT MAY CONCERN.’ The friendly competition shared between the duo has culminated in this explosive and triumphant single putting others in the scene on notice.

To mark their signing to NLV Records, Melbourne’s FOURA and Western Sydney’s Big Skeez craft the perfect soundtrack to a wild night out in their latest track, ‘On Tonight’. The music video is directed Murli who provides visuals to match the glitzy garage feel of ‘On Tonight’. Afroswing and high energy combine to bring the pair’s individual sonics to new territories. A statement of arrival.

Nelson Dialect and Must Volkoff enlist Krown for ‘Focussing’, the second single off their forthcoming sophomore LP, ‘Glorious Definitely.‘ Produced and directed by Must Volkoff, the scratchy and unpolished vibe to ‘Focussing’ leaves Dialect and Krown with the perfect platform to showcase their love for the art. With their growing cult buzz, Dialect and Volkoff’s consistency continues to cement their presence as a formidable duo within the AU scene.

N.W.I members R.em.edy and REYKO! unveil their mesmerising new single, ‘Fked It Up’. With the music video directed by Visionaire Media, R.em.edy and REYKO! deliver some of their best vocal work as they soar across the ambient and soothing keys of ‘Fked It Up’. Produced by MixedByJD, the pair share genuine chemistry that allows for a pristine display of their quickly evolving talents. A couple of names on the rise. And quickly.

CrzyCam is determined to show his versatility on his new track, ‘On My Way’. The Sydney emcee popped up on the radar last year with his feature verse on Rops1’s ‘No Pressure’, and has since been on track to etch his name in the scene. CrzyCam’s latest single is a heavy blend of autotune and follows a similar sound to his previous track, ‘Moving On’. ‘On My Way’ shows CrzyCam is motivated to venture further than drill and rap and showcase a more sonically versatile side of himself.