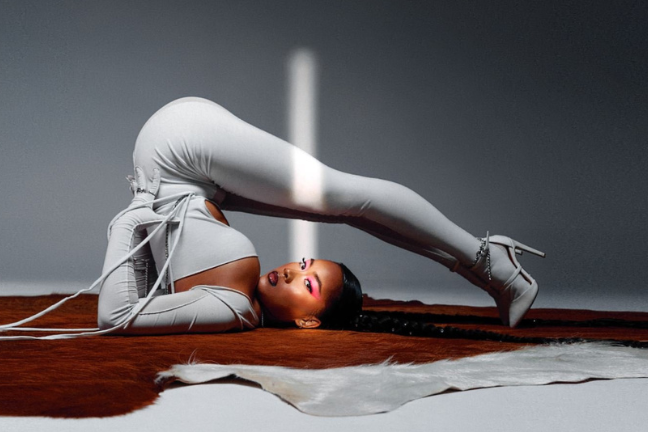 Never missing a Monday, AUD’$ presents six new visuals from our New Hip-Hop Videos From Aus playlist; highlighting the latest and best videos year-round from across the AU. Don’t miss out! Subscribe to our channel to be the first across the hottest new clips. Here are a few of our weekly favs but there are hundreds to watch in our Youtube playlist! Which video are you into this week? Slam the comments with who we missed…

LARA ANDALLO – HEAD TO TOE
(Directed by Melanie Or)

R&B artist Lara Andallo is back after two years with her best music yet in the new single, ‘Head To Toe’. The Sydney-based artist explores her sexuality in a confident return across hip-hop, R&B and pop production by Nikoss and @swindailfukboi. Reintroducing herself since the 2020-released ‘On My Mind’, the first verse of Andallo’s latest track incorporates her masculine side while the second expresses her femininity. Directed by Melanie Or, the music video contrasts the singer’s duality with photoshoot set visuals of her on a rotating podium. ‘Head To Toe’ enthrallingly welcomes one of Australia’s most talented R&B rising stars back into the limelight.

Western Sydney artist Kapulet speaks the ‘Trap Talk’ and taps CG for his latest melodic single. Kapulet sings of his lifestyle across guitar plucks, bellowing 808s and the trap production from 99hurts. Mixed and mastered by i.amsolo, ‘Trap Talk’ comes only a few weeks after CG’s debut with ‘Drill Is Dead’ and Kapulet’s earlier 2022 collaboration with Yeloboi Tommy on ‘Riding’. The music video varies from his usual Sydney aesthetic, this time heading to Hamilton Island for the Aaron Bull-directed music video with drone footage of luxury cars shot by Brendan Sutton.

Complete reveals his struggle with alcohol addiction on another poignant offering, ‘Dutch Courage’. The Perth-based emcee is undisputedly in his bag as of late, whether it’s his bar-heavy ‘Rapper Tag #06’ or sorrowful singles like his most recent titled ‘Homesick’. The new single is produced by Kryple and builds on the latter, sampling The Black Eyed Peas’ ‘Just Can’t Get Enough’ and formatting the track like a hotline call. The Drop Shot Media music video furthers this format as Complete raps over a payphone and explains his relationship with alcohol – “Used to drink for fun or drink for functions, now I drink to function.”

Miiesha provides visuals for ‘Still Dream’, her first single of the year from new project Smoke & Mirrors. Co-written by Stephen Collins and Lucianblomkamp, ‘Still Dream’ is a highlight from the double-EP’s second half with the first five tracks originally released in 2021. Over soft guitars and airy synth pads produced by blomkamp, the QLD artist tenderly delivers an emotive ode to her grandmother. Reflecting her Vivid performance at the Sydney Opera House last week, the Clint Gough-directed music video captures the QLD artist in front of colourfully lit and watery backdrops. Miiesha is currently on her Smoke & Mirrors tour and will visit Brisbane and Melbourne this weekend with special guest Akosia.

Ipswich artist Lawd Lance reserves his first solo single ‘BADBOY’ just “for the baddies”. Produced by MasonxBeats, the Castille Records signee looks for his type over Spanish guitar licks and trap instrumentation. Lawd Lance has always been accompanied on a track by at least one of his 43 family members like Nokz78, Ezra James or Lisi. Yet on ‘BADBOY’, he proves he can hold his own and still deliver the hilarious one-liners many have been waiting on since his last release, ‘Pick N Choose’. Shot at Rage Cage and Imaginaria in Brisbane, the music video is filmed by frequent collaborator Ruff Pops Visuals.

After making headlines last week, 15-year-old rapper Dylan Billiondollars releases his latest track titled ‘can’t get enough’. Before a school excursion, the Sydney-based artist and his younger brother were busking in the CBD when The Kid LAROI surprised them with a $1000 tip. Capitalising on the viral moment, he now shares his second release of 2022 – another infectious trap single showcasing his young and unfiltered confidence over the sample of ‘Pope Is A Rockstar’ by SALES. The accompanying glitchy and swaying visuals are directed by Haidyn Films who follows him throughout the city to convenience stores and arcades. Don’t take our word for it, take the word of global superstar LAROI who said “these two kids are up next right now.”