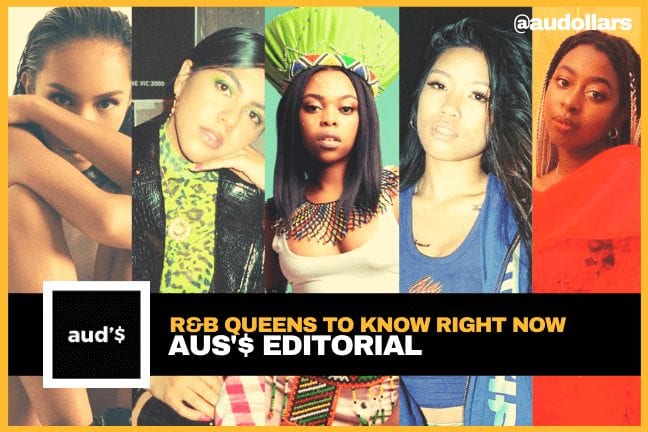 Who run the world??? Following Sampa The Great and Kaiit DOMINATING at the ARIAs last year and clean sweeping the urban awards from the boys, there’s little doubt as to who is making the moves locally. And while hip-hop often gets the spotlight, its cousin R&B has been running up the numbers across the world of late. Hype around Jhene Aiko’s  recent Chilombo album and the sense of anticipation around a potential upcoming SZA album this year are testament to that.

With the Australian R&B scene booming we thought the timing was right to do a little more digging and bring you some names you need to be across. So enjoy listening to 8 absolute QUEENS of the Aus R&B scene rn…

OLIVIA ESCUYOS
From humble beginnings of YouTube R&B covers that eventuated into her two albums, Covers, Vol. 1 & 2, Olivia Escuyos is now finding success through her own original efforts. The new year has seen Escuyos gearing up for an even bigger decade ahead starting with the collaborative “Where You Wanna Go” alongside U.S. artists, Adrian Milanio and RJ Suave. Her latest track, “Attention”, sees Escuyos at her best with the catchy slow jam showcasing her strong vocals and her serene energy reminiscent of Jhene Aiko. A must for any future quarantine and chills.

THANDO
Thando, the Zimbabwean born and Melbourne based singer, is no rookie to the scene. After the release of her EP Digital Love Letters, her breakout year in 2016 was followed by several festival appearances. Thando’s style of blending her rich vocals under dark, almost creepy, production sets her apart from the typical R&B sound. This comes to life in her biggest hit yet, “NUMB.” featuring REMI, and “Happy”, where the influence of Lauryn Hill comes alive. As if her own work didn’t create enough of a resume, Thando also featured on Sampa The Great’s debut studio album, including “Diamond In The Ruff” and the title track, “The Return”. Since her 2018 “Gag Order”, a powerful collaboration with fellow Melbourne act Françoistunes, Thando has been taking time to focus on a new family. Fingers crossed we get more music soon.

TEMGAZI
Sydney artist Temgazi is one of the most promising names we’ve highlighted on AUD’$. Once part of a group on The X-Factor, Temy has since been on a slow rise as a solo artist, with releases of bouncy SoundCloud tunes including her debut, “Favour”. Her successful record “Bunsen Burner”, is the chill vibe we’d expect to hear from SZA, with laidback lyrics of smoking sweed and themes of modern love. With a BIGSOUND appearance under her belt, a teased ‘visual project’ was initially geared up to drop in 2019, however Temgazi now seems ready for a 2020 release. The project will hopefully showcase the talents of creatives around her and her gifted artistry both in and out of music.

BECCA HATCH
One of the younger names on this list, this 19-year old has us very excited for what’s next. Winner of the Unearthed High Indigenous Initiative in 2017 and recently one of Triple J’s Unearthed Feature Artist, Becca Hatch is already proving to be a valuable part of the future of Australia’s R&B scene. In 2019, Hatch vividly painted her upbringing as a Samoan and Indigenous Australian through “Brown Girl Chronicles” and recently returned with “2560”, a cruisy and carefree ode to her hometown, Campbelltown. Despite the UK garage influence in the track’s production and the similarity in gorgeous vocals to Jorja Smith, Becca Hatch passionately and proudly reps the “six-oh”. With the calibre of artists coming from Western Sydney, Becca Hatch is a powerful addition to the area’s arsenal.

PANIA
Naming Amy Winehouse as one of her biggest influences, PANIA is a diamond in the rough with one of the more unique sounds in this list. With only two songs to her Spotify, each amassing roughly over 8000 streams, this Melbourne native is truly a hidden gem. Her 2018 debut “Lotus” fuses minimalist instrumentals with her powerhouse vocals to tell a story of heartache. Jump forward to 2019, PANIA seems to be hanging onto the themes of love and lust in her latest track, “CARLO”. With the Kali Uchis flavour in her singing, the unexpected last verse and the Instagram snippets she’s been sharing, it’s pretty clear we haven’t seen all that she’s got, but we’re excited for it all to be revealed very soon.

JESSICA JADE
Sydney local, Jessica Jade began her career in 2014, appearing on The X-Factor as part of an all-girl group. Fast forward to 2017, the singer-songwriter took part in Sony’s The ShareSpace, a YouTube series where “8 artists have 30 days to create, collaborate and share music.” This competition saw Jessica Jade cover R&B staples including “Doo Wop (That Thing)” by Lauryn Hill and “No Diggity” by Blackstreet. Slower, stripped back instrumentals seem to bring the best out of her, with her latest single “Bet” placing an emphasis on her smooth vocals over the backing of an acoustic guitar. That being said, Jessica Jade has no problem picking up the pace and showing a fiery sassiness with her 2019 records “Taste” and “One Time”. Though she’s made some small waves in R&B playlists, her stream numbers still don’t reflect her full talent. Yet.

KYE
With songwriting credits for Billy Davis’ “Shoulda Known” under her belt, last September saw Kye release her debut single “Good Company”. Her incredible vocal control seems effortless across the neo-soul production from Fossa Beats, Billy Davis, Tentendo and Simba Andrews. Kye has shared the stage with some of Australia’s hottest names including Sampa The Great and Ruel, but it won’t be long before her own headlines tours and hopefully, a debut project that follows. With a powerful style and presence in the mould of Solange, expect future releases to capitalise on her star potential and bring her to the forefront.

LARA ANDALLO
The Filipino-Australian Lara Andallo is one of the freshest names here, but in less than a year since her major label signing to Warner Music, she’s had 4 songs clock over 100,000 streams and earlier this year released her debut EP, For Her. Andallo had her sound down pat since 2017, with her first few records including “Good Luck” and “You Ain’t Sorry” earning her spins on both Triple J and Triple J Unearthed. Her label debut in “Confidential” is something you’d hear from artists like Kehlani and Ella Mai, while “180”, her second single featuring Lil Spacely, proves that Lara Andallo is a name to keep an ear out for in future Hip-Hop/R&B crossovers. For Her is a convincing and confident debut and there’s no doubt Lara is on her way to being a face of the Australian R&B scene.

Words by Frank Tremain. Follow him on IG @ftremain.jrnl????