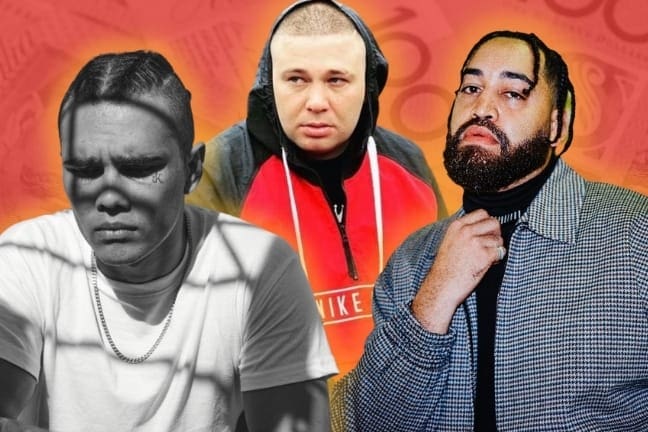 We’re now at Week 34 of our New Hip-Hop Videos From Aus wrap, constantly bringing you the latest and best videos to drop from across the AU. Don’t miss a clip! Subscribe to be first in the know with all the latest drops from down under. Which clip you into this week? Slide in our comments with your fav!

KOBIE DEE – ABOUT A GIRL
(South of Home Creative)

Kobie Dee’s latest single ‘About A Girl’ delivers a poignant first look at his upcoming debut EP, Gratitude Over Pity. Produced by Papertoy and Magic Nic, the Gomeroi artist’s first track of the year tells an unfiltered, poignant and distressing tale of a young woman caught up in addiction and abuse. Alongside a heartbreaking music video by director Joseph Plumb, ‘About A Girl’ showcases exactly why Kobie Dee is one of the best storytellers in Australia. The Bad Apples signee penned the EP across a four year period, helping him to “uncover a perspective of gratitude and appreciation towards the present through a lens of dedicated optimism.”

Mason Dane continues his drive to the top with latest single, ‘Dash‘. Produced by Day1 frequent collaborator Liam Thomas, the booming 808s and trap drums make way for the high-energy melodic performance from the Newcastle artist. The Marcus Moore-directed visuals capture Dane alongside fellow artists including Asher and Baby Prince. From Day1’s debut EP to Mason Dane’s latest single, the chemistry and multi-faceted talent between this collaborative circle is proving to be unstoppable. Bloodjuice announced via AUD’$ that Dane was one of the NSW acts to watch in 2021, and it’s not too late to familiarise yourself with this versatile emerging talent.

Coming straight off his L.A.T.E EP, Phil Fresh drops his personality-packed new music video for ‘On The Low‘ featuring Rissa. The Sydney artist’s latest effort is a smooth blend of future-soul R&B and Hip-hop detailing the back and forth between him and his love interest. Providing the female perspective, Rissa blesses the track with her honeyed vocals, compliment Fresh’s playful wordplay and taking the track to new heights. Filmed at their respective homes during lockdown, the iso-inspired music video finds the pair dancing around and harmoninsing together for the song’s highlight moment.

Perth-proud Complete puts the whole scene on notice with ‘Rapper Tag #06‘. After making it’s way through the East Coast with tags from Nerve, JK-47, Nate G and Wombat, Rapper Tag S2 has officially landed in WA. Complete delivers one of the best verses we’ve heard from him as he effortlessly slides in and out of various flows and rhyming schemes to take aim at the current state of the scene and the underappreciation of Perth artists. Closing out his tag, Complete spends the final minutes to shoutout damn near the whole WA scene, before tagging frequent collaborator, Bitter Belief.

Western Sydney star B Wise drops his Zoom-shot music video for ‘Ezinna‘ featuring ARIA Award winner, Sampa The Great and acclaimed up and comer, Milan Ring. Closing out his matured and dynamic sophomore project jamie, ‘Ezinna’ is an uplifting anthem championing self-love and reconnecting with your past self. With Ring’s guitar riffs and the trio’s harmonies driving the instrumental, ‘Ezinna’ reveals some of the sonic progression and introspection that B Wise delves further into in his latest project. From Sampa rapping in English, Bemba and Nyanji, to the countless cameos from Blessed, Jess B, BOY SODA and more – it’s clear ‘Ezinna’ is a triumphant celebration of culture.

After almost a year since his last release, Masi Rooc drops ‘Stuck In My Ways’ from behind the bars of Bathurst prison. Produced by LEN20 and Colcci, Masi uses a similar delivery as Brooklyn drill artist Sheff G to discuss stepping away from a life of crime to further pursue his promising career in music but as the title suggests, he’s stuck in his ways. The music video by Domcben Films follows Masi from a first-person perspective returning to his home after being released. A premonition perhaps?