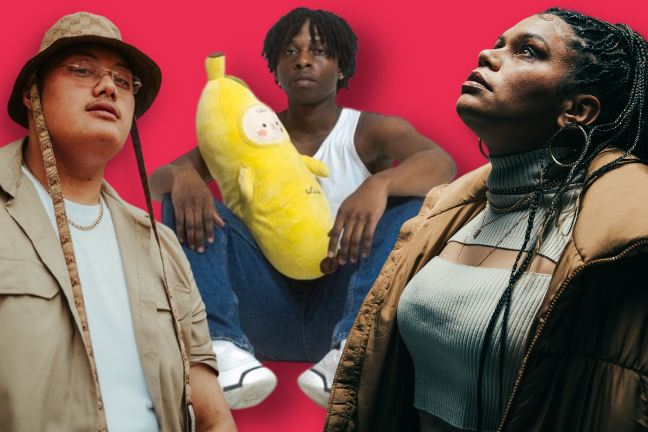 Another week, another six new visuals via our New Hip-Hop Videos From Aus playlist; as always, highlighting the latest and best videos year-round from across the AU. Don’t miss out! Subscribe to our channel to be the first across the hottest new clips. Here are a few of our weekly favs but there are hundreds to watch in our Youtube playlist! Which video are you into this week? Slam the comments with who we missed…

Kapulet links with fellow young Western Sydney artist Yeloboi Tommy for their slick new single ‘Riding’. Uniting with great chemistry, the two reflect on their similar come-ups over Kaydee Pro’s production of melodic piano keys and trap drums. In the ‘Riding’ music video directed by Aaron Bull, he captures the duo in mostly dark, illuminated shots on rooftops, in alleyways and among friends. While this marks Kapulet’s first track for 2021, it’s Tommy’s second appearance this year following his catchy ‘Heartbreak’ release. The motivational track is one that’ll light a fire to your hustle, with the two singers emphasizing what they’ve learnt in their careers so far.

Melbourne’s own Babyface Mal comes in hot with his latest single ‘Lights, Camera, Mishap’. Releasing banger after banger, the 66 Records signee has been on a consistent roll since his breakout year in 2021. If you didn’t already know, Mal is an extremely slick lyricist known to find himself flexing his wordplay and smooth flow in some enjoyable and unique pockets. On ‘Lights, Camera, Mishap’, the third track from his recently released The Crib, Vol. 2, he achieves just that. In the music video directed by Josh Barolo, he encapsulates Mal’s effortless style by keeping it simple and playing on the song’s title with frequent shots of Mal standing in front of the set lights at the set.

BARKAA – FIGHT FOR ME
(Directed by Matthew Hopkins)

Malyangapa, Barkindji woman Barkaa shares a deeply personal addition to her debut EP, Blak Matriarchy. Produced by Jaytee Hazard, she enlists First Nations duo Electric Fields for ‘Fight For Me’, a profound commentary on Blak motherhood and the Stolen Generation. Barkaa’s storytelling transcends generations by exploring the experiences of herself, her mother and her children through themes of addiction and trauma – “‘Fight For Me’ is saying that if you love your babies, you will fight with everything you’ve got to be a better person for your children and bring them back home to where they belong.” While Electric Fields deliver the gripping chorus, the Sydney artist brings the track to life in the music video directed by Matthew Hopkins.

Accompanying his Moovin Groovin mixtape release, Sydney-raised rapper Jaecy pays homage to an Australian icon on ‘Crikey’. The Guinean-born artist holds nothing back on the 8-track project, breezing through flows with venomous lyricism and melodic moments throughout. Produced by Aywy, the short song showcases Jaecy’s confident persona, knowing he’s at the top of his game right now. Collaborating again with director Kev Blindside, the visuals shoot The Area emcee in the rainforest and in front of waterfalls, hitting perfectly as Steve Irwin’s “Crikey!” ad-lib splits through the track. While Moovin Groovin is a Soundcloud-exclusive mixtape for now, here’s to hoping we get it across all platforms in the future.

Melbourne-based Waterboy returns with ‘Banana Love’, his first official single since 2019. Quickly becoming a familiar face around friends’ home studios and youth centres across the 3k. Recorded at Marshall Street Studios, ‘Banana Love’ is a charged-up trap offering about “overcoming adversity in life” over the production of Slaughter Hill. Today, the 22-year-old shares the trippy and energetic visuals from ‘Karma Visuals’ to accompany the single. Between VHS shots and clean transitions, ‘Banana Love’ is a triumphant reappearance from the African Australian talent, hopefully not the last we’ll see of him this year.”

Silas GaYE drops vibrant new visuals to ‘BET!’, fresh from his recently released project Baby G. The Liberian-born and Melbourne-based artist released his first EP, Pekin 1,  last year and is already following it up with his new 8-track project. Similar to what makes Lil Uzi Vert so appealing, Silas brings an undeniable energy and fun vibe to the synth leads and trap instrumental of ‘BET!’. Directed by Tim McCartney, the TMC Media music video features Silas and his boys in front of bright backdrops and subject to colourful edits. Silas GaYE has been a name circulating around the 3k for a few years but in 2022, he’s introducing himself to the rest of the AU and wider.