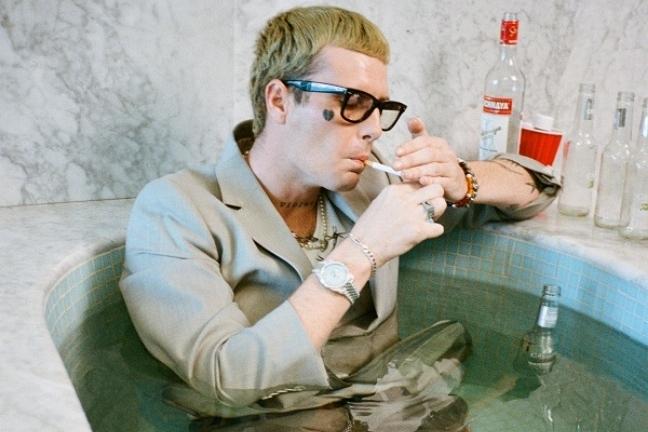 ‘I believe whatever doesn’t kill you… only makes you stranger…’ are the infamous first words uttered by Heath Ledger’s Joker in Christopher Nolan’s ‘The Dark Knight’ film. A brazen character with a complex mind who intrigued audiences at the time of release, his legend has only grown in stature with every passing year. There are strong parallels to be drawn with Ben Hayden; the unassuming, laconic rapper from a couple of hours south of Sydney, whose rollercoaster life has been closely narrated through his astute pen-game. Better known as Huskii, formerly HUSkii Ben, the emcee has maintained a stranglehold on the underground component of Australian rap since emerging via SoundCloud the better part of a decade ago and is now set to assert his dominance on the wider Aus and global hip-hop landscape via the release of his debut LP.

Ask any rapper in Australia who their favourite rapper is, and they’ll point you straight towards the 201 king. Lauded by his counterparts and idolised by his animated fanbase, Huskii is the consummate prodigy of the craft. His grasp on the art form is a unique combination of talent, hard work, and life experience. From crisp double entendres to vivid underworld storytelling, and a mind-blowing knack for multisyllabic rhyming, Huskii navigates the world of hip-hop in the same confident, meticulous manner that has etched names including Immortal Technique, MF DOOM, and Mobb Deep into the rap hall of fame.

Huskii’s seven-track debut album Antihero is equipped with homegrown and international features including (in order of appearance) Grubbo, Mic Pompeii, Ides and Shadow. Firing off with the lead single, ‘Heroin Rap‘ is a fitting introduction to his first album that showcases his lyrical ability with both self-reflective and braggadocious undertones, a sneak peek into the rest of the project. Followed by the Cash Madness runner-up ‘Ruin My Life‘, the Wollongong-raised artist addresses his cult following and the reoccurring themes of his discography, rapping:

“Fighting all these demons aren’t as easy when your fans know.”

The ‘Still Stressin’ rapper is doing just that as he deals with his troubled upbringing and its lingering impact on his adult life, worrying about providing for his family and fighting the inescapable and hereditary pull towards crime. Produced by TASKER, ‘Ruin My Life’ is one of the greatest displays of technical lyricism and distinctive artistry in Australian rap history. Not only delivering the best bar of 2022 (yes, the “Mercedes doors” one), the 201 antihero grapples with his newly founded freedom without any conditions or bail, closing a significant chapter in his life and declaring a royal revival of his career.

“It ain’t changing the fact being a crim’s in my genes, I couldn’t care what they telling me I’m a king in the scene.”

With co-producers on the album from Jay Orient, TURBO CHOOK, and Lewis Hosie, the reveal of what he’s called the new sound of Sydney continues with the third track, ‘Pulp Fiction’, named after the Quentin Tarantino 1994 film. At first, the song boasts a villainous bassline and metal percussion with samples and dynamic hip-hop production. Portraying the authentic UK sound that’s influenced Huskii and the scene at large, Grubbo is welcomed with striking synths before the beat switches to a string-heavy boom-bap cut.

The “big bunny of Blacktown” ends the track teasing that his debut could be his last and anointing Skem as his successor. Huskii carries the boom-bap energy and his distinct cadence into the soulful song ‘Melted’, where he touches on substance abuse, mental health, and celebrates his turbulent come-up over upbeat and psychedelic production reminiscent of a Faces era Mac Miller.

“It’s been four years, three lagging since Bodybag sleeping in the booth. Now I’m out here, getting six figures off the shit I do.”

‘Hellevator’ is an under one-minute interlude filled with boom-bap drums, vinyl crackling and siren-like leads. In place of Huskii, the only vocals on the track is a sample warning of the devil. Evoking a Madvillainy feel to the project, there’s samples littered throughout Antihero including news segments on music’s influence on violence and film excerpts about devil worshipping.

Ending what’s been a long-awaited debut album, Huskii reveals his self-awareness once more in ‘Toxic’. Over the piano keys and guitar plucks, he tests his melodies in the dreamy hook where he recognises his faults in relationships and contemplates relapsing back to his previous life. Yet, as the self-proclaimed antihero, Huskii still leaves a few bars to spit wisdom wrapped in his Sydney street bravado.

“I’m doing numbers like those label dudes, I aint trynna label dudes but Sony put a label on your CD and get paid off youse, that’s a rort cousin.”

Every Huskii body of work to date feels like a hit of the substances he raps so much about; warm and euphoric, yet you’re hooked and hungry for more. There’s little doubt Antihero is his most polished project yet and will begin the mainstream career ascent that has been steadily building for some time, however for an artist with the breadth of talent and ranging repertoire of Huskii, the seven tracks are merely a drop in the ocean. Cooked up in a solitary night, Antihero is a must-listen for any hip-hop fan in Australia or abroad and is certain to translate into a stampede of energy when taken on the road to sold-out shows this April. AUD’$ will be linking with Huskii when he brings the show to Melbourne, ensuring that fans are fed with the latest exploits from Aus Rap’s Joker. Antihero is available via Island Records on the 11th of February. 201.