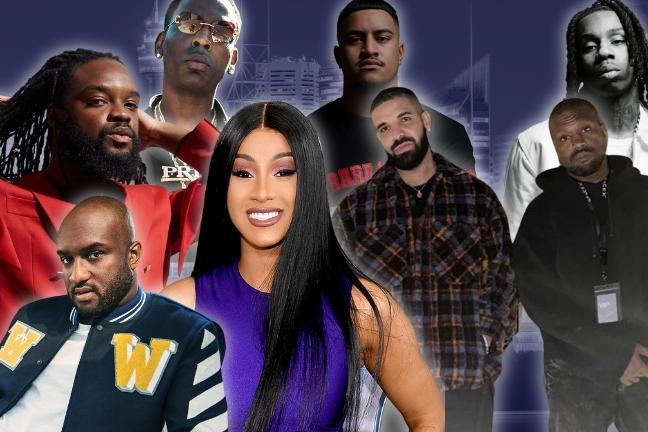 Wrapping up 10 of the biggest moments during the month of November in the AUD’$ and wider hip-hop universe. Well into the season of award nominations and ceremonies, there’s never a list without controversy so let us know your thoughts in the comments…

In November, the Hip-hop community mourns the passing of an ingenious innovator, an independent artist and label owner, and the ten victims of the Astroworld Festival. AUD’$ pays our respect to all the lives lost and encourages everyone to give people their flowers while they can still be smelt.

Young Dolph, an independent Memphis-based artist and cousin of the late Juice WRLD, was shot and killed in his hometown at Makeda’s Homemade Butter Cookies on Wednesday, November 17. The 36-year-old rapper would frequent the bakery when back home, even posting his love for the store on social media a few weeks back. At the time of writing, the motive behind the shooting is unknown and Memphis Police Department have yet to identify the two shooters but have found the white Mercedes that was used as a getaway vehicle. His passing occurred just days before his annual Thanksgiving turkey giveaway event that was instead hosted by artists signed to Dolph’s label, Paper Route Empire. The hip-hop community have been reacting to the news of his passing, remembering Young Dolph for his boisterous persona, his proud independence and his genuine collaborations with fellow Memphis rapper, Key Glock including Dum & Dummer 1 & 2.

Virgil Abloh, the prolific fashion designer and artistic director of Louis Vuitton’s menswear collection, died on Sunday, November 28 after a two-year private battle with a rare form of cancer, cardiac angiosarcoma. The Off-White founder has become synonymous with fashion over the last two decades, connecting streetwear with luxury wear and breaking down barriers as the first black American creative director of LVMH. Abloh’s legacy transcends just fashion, as a multi-talented individual who practised a range of different disciplines including music, architecture, contemporary art and philanthropy. His death at 41-years-old was confirmed via an Instagram post stating, “He is survived by his loving wife Shannon Abloh, his children Lowe Abloh and Grey Abloh, his sister Edwina Abloh, his parents Nee and Eunice Abloh, and numerous dear friends and colleagues.” Working with artists like Kanye West, Drake, A$AP Rocky, Westside Gunn and many more, Virgil Abloh will be remembered as a cultural visionary of the time.

As the year comes to a close, award season came in full effect with the 49th annual American Music Awards taking place on November 21. The 2021 publicly-voted award show was hosted by Cardi B and held at Microsoft Theatre in downtown LA, California. Doja Cat and SZA won collaboration of the year with their hit ‘Kiss Me More’ with Doja also claiming favourite female R&B artist and favourite R&B album for her third project, Planet Her. Megan Thee Stallion cleaned up too, winning favourite female hip-hop artist, favourite hip-hop album for Good News and favourite trending song award for ‘Body’. Following songs that have been inescapable this year, ‘MONTERO (Call Me By Your Name) by  Lil Nas X took home the award for favourite music video. With Kanye Westclaiming the favourite gospel artist award, Drake unsurprisingly won the favourite male hip hop artist. Fellow Canadian The Weeknd won favourite male R&B artist after the ongoing success of his 2020 album, After Hours. Lastly, Cardi B didn’t spend all her time there hosting, receiving the favourite hip-hop song award for her early 2021 hit, ‘Up’.

If you’re lucky enough to secure a sample from such an iconic song like Michael Jackson‘s ‘Smooth Criminal’, you have to nail it. Taking this risky route, the Chicago hitmaker Polo G reinvents the classic tune for his new single ‘Bad Man’. It’s seemingly become the new trend to grease up old hits with starkly drill or trap sounds, and Polo gives the 1988 single the same treatment with a sped-up version of the recognisable bassline and lively trap drums. Complimented with visuals from Arrad, ‘Bad Man’ tips the hat to the King of Pop with Polo donning the white suit as he visits a bar occupied by “The Opps”. The music video ends with an endearing message thanking MJ and his estate for allowing him to recreate the song, writing – “We hope we have contributed our small part to the everlasting memory and legend of the greatest entertainer of all time.” ‘Bad Man’ has been the perfect way to get people talking again as he gears up for his fourth project Hall of Fame 2.0, set for release on December 3.

AUD’$ are excited to reveal the 2021 tournament fixture for the third annual Cash Madness. Plucked from the AU Cash Radio playlist, there are 32 songs set to go head-to-head throughout December to crown the CASH MADNESS 2021 CHAMPION. Shortlisted by the AUD’$ editorial team with one wildcard voted by our audience, you’ll decide which artist and song will make it through each round by voting on both Instagram via our story and Facebook via our daily poll. The bars been set by Goodna goat Lisi who won Cash Madness 2020 for his single ‘Fists Up’ featuring Vicc. In Round 1 alone, there’s already some tough matchups between Huskii and HP Boyz, Baby Prince and CG Fez – trust me, you’re not going to want to miss this one. Check out the list of all 32 competing songs below and stay tuned to our socials for every matchup.

After going back and forth for years, J Prince intermediates Kanye and Drake’s reconciliation as they prepare to perform together for the ‘Free Larry Hoover Benefit Concert’ at Los Angeles Memorial Coliseum on December 9. Kanye has been advocating for the release of Larry Hoover Sr. for some time now, meeting with former President Trump in 2018 to ask for the Gangster Disciples co-founder’s clemency and featuring his son Larry Hoover Jr. on his latest album, DONDA. Taking to Instagram, Ye and J Prince publicly invited Drake to join him on stage which resulted in the two meeting at Drake’s crib the next week to finally put their differences aside. While tickets for the event have been reported to range from $200-$1250, the concert will no doubt be making history as the two goats of our time come together for a common cause. Free Larry Hoover.

Genesis Owusu wins Triple J‘s 2021 Australian Album of the Year with his debut album Smiling With No Teeth. Released in March, the 15-track project extends his typical hip-hop focused sonics into worlds of punk, folk and funk. The Ghanian-Australian artist is in the best career year yet, earning the co-sign from the internet’s busiest music nerd Anthony Fantano, and winning in 4 categories at the ARIA Awards. The other nominees for the 17th iteration of the annual Triple J award included Amyl and The Sniffers, Ruby Fields, The Avalanches, Baker Boy, Greta Ray, Middle Kids, RÜFÜS DU SOL, Holy Holy, and Tones and I. SWNT summarises Owusu’s journey in music so far, soundtracking with his most ambitious and adventurous collection of songs. The Canberra-based artist has also been awarded a second J Award, winning Australian Music Video of the Year for ‘The Other Black Dog’ directed by Riley Blakeway. The video is an eccentric and sinister depiction of his internal struggle, as he chases a bandaged, grills-wearing version of himself in an all-red suit.

After a two year hiatus, Kendrick Lamar made his return to the stage with an electric set at Day N Vegas on the 10-year anniversary of his debut album, Section.80. Dressed in all white knitwear attire and donning the moniker of oklama, the elusive Lamar headlined the first of the three day festival in LA. Amidst rumours of his rock-influenced upcoming album, Kendrick chose to journey through his catalogue performing songs from Section.80 through to his last offering, DAMN. Revisiting some of his classics that hadn’t been performed live in years, he also brought out cousin and collaborator Baby Keem to perform their recent tracks, ‘Family Ties’ and ‘Range Brothers’, which the crowd erupted to. The Compton artist has been popping up randomly throughout 2021, notably on these collaborations that sent the hip-hop community into chaos with Kendrick reinstating himself at the top of the rap game. Though he hasn’t released any new music in four years, he ended his performance at Day N Vegas saying he’d be back “very soon.” Announcing his next album will be his last under Top Dawg Entertainment, the world eagerly awaits the imminent return of hip-hop greatness.

Goodna artist Lisi shares Perspective on his sophomore project via his Castille Records label. Atop the Australian scene, the young rapper hasn’t slowed down since he debuted in 2019 with ‘Say Less’, reflecting on the last two years on the project’s first single, ‘Dreams’. The nine-track album feels like a truly defining moment for Lisi, who showcases his matured and versatile artistry on the first album released through his label. Lyrically, Lisi navigates through the music industry with the fame and responsibilities that follow and manages to uphold and pass on his values to the next generation. From tropical trap tracks like ‘Tell The Truth’ to anthems like ‘Brown Brother’ and ‘Baby We On’ featuring EJ, Lisi boasts a variety of refined classic sounds and poignant messages from his perspective. Aligning with the project’s release, he also partnered with Footlocker to promote the re-release of the Red Belly Black TNs.

The annual Astroworld Festival hosted by Travis Scott was booked in Houston from November 5 – 6. There was a star-studded line-up with scheduled performances from Drake, Lil Baby and Earth, Wind and Fire, just to name a few. Though the venue was limited to approximately 50,000 attendees, officials said there were almost 200,000 people inside after fans broke down barriers and ran past security before the show started. During Travis’s set, concertgoers surged towards the stage and stampedes ensued, killing 10 people between the ages of 9 and 27, and injuring hundreds. Concert goers stated the show was extremely understaffed with paramedics and security on-site overwhelmed as the event was declared a mass casualty event by Houston officials an hour before the show was scheduled to finish. However, the show didn’t stop for another 40 minutes, becoming an incredibly traumatic event for everyone involved and sparking debate across the world regarding rage culture and event safety. Rest in peace to everyone who lost their lives that day, and our thoughts are with everyone involved in this tragic event.