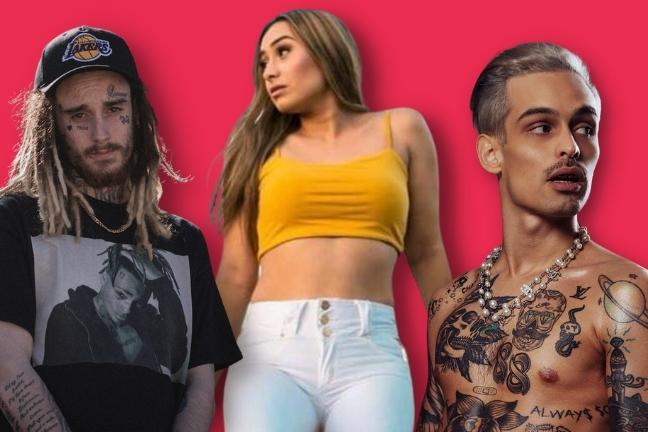 Another huge week of New Hip-Hop Videos From Aus; we don’t sleep in showcasing the latest and best videos year-round from across the AU. Don’t miss a single one! Subscribe to our channel to be the first across the hottest new clips. Here’s a half dozen of our weekly favourites but there are hundreds to watch in our Youtube playlist! Which video are you into this week? Slam the comments with who we missed…

Yeloboi Tommy returns with ‘Heartbreak’, an anthemic first release for 2022, produced by his brother 99hurts. Among the many breakout Sydney stars from last year is the Asian-Australian artist and his three offerings, ‘FRAUDS’, ‘OUAH’, and ‘Trust Issues’. Now in his sophomore year, he follows the similar formula of arming his vulnerable lyrics with addictive trap melodies on ‘Heartbreak’. Reunited with NavsRevenge for the track’s visuals, he said – “seeing as ‘Heartbreak’ is a high-energy track we decided to make the visuals very contrasty, vibrant and bright, keeping the editing style upbeat and exciting.” There’s no signs of slowing down for Yeloboi Tommy, so keep up.

Melbourne artist Gymie makes his 2022 debut with ‘Skyline Freestyle’. Produced by KB808, the triumphant song sees Gymie having way too much fun with his punchline-heavy and smooth talking raps. Synonymous with street racing culture, the track is titled after the Nissan Skyline he’s shot in front of in the Scorpion-directed music video, with fellow 3k collaborator Double O Smoove as the VHS camera shooter. Rising through the scene since his 2020 debut with ‘Corner’, Gymie has established a catalogue of punchy trap heaters. Despite teasing via IG that he’d be dropping an EP in January, there’s been no release as of yet, however, ‘Skyline Freestyle’ etches us one step closer.

NME, Section 60 and Bently enter 2022 in unison on their new track, ‘Troublesome’. As their first collaboration together, Brisbane group NME and artist Bently link with Western Sydney’s Section 60 over Prod Mess and James Angus Music’s piano and sample-heavy drill production. Paired with a music video shot by Luke Soanes and DOMCBEN Films, they show out in numbers and in all black to rap about their troublesome ways while Bently offers the catchy melodic hook and a verse of his own. More down tempo than their usual high-energy anthems, ‘Troublesome’ is a welcome return and change of pace for all involved.

Melbourne’s Jess Makaveli and JDro connect for their Latin-infused trap collaboration ‘Dinero’. Produced by KB808, the Hispanic Australian artist interchanges between singing and rapping in both English and Spanish while JDro nails the track’s chorus and adds his own money-focused verse. Scorpion Media doubles up on duties with his second music video for the week, shooting them enjoying a boat party and posted up in front of Latin Pride Low Riders. While her only release last year was a similarly fiery and assertive single titled ‘Que Pasa’, ‘Dinero’ is an exciting return from the scene’s leading Latin women and one-half of the XENO duo.

AU’s busiest emcee Indigomerkaba releases ‘Rubberbandman’, a statement track from his upcoming project Manifestation. The Adelaide artist reflects on the past and speaks his future into existence in this punchline clinic, demanding his respect as one of slickest writers in the country. Produced by Rosso Beats, Indigo raps about his resilience, manifestation and the newfound purpose in his daughter’s birth over the dark track littered with trap drums, sirens and eerie synths. Directed by Sam Winderlich and himself, the visuals portray B&W shots depicting his family struggles and bright night time shots of him delivering his bars. ‘Rubberbandman’ feels like the start of an exciting new era for Indigomerkaba, one that will be further fleshed out on his next project, Manifestation.

Sydney-based Phi11a effortlessly executes another hypnotic trap single in his 2022 debut, ‘Life in Reverse’. Produced by Big Gigantic and Tk Kayembe, the watery keys, curious leads and trap instrumentation provides Phi11a’s sonic playground in which he races through flows and braggadocious bars. Directed and edited by The Magic Lunchbox, the ‘Life in Reverse’ music video visits The Real Deal in Sydney and brags a range of creative scene switches. The track comes with an important message from Phi11a – “When the hard work is behind you, know that easier times are coming, never live life in reverse.”