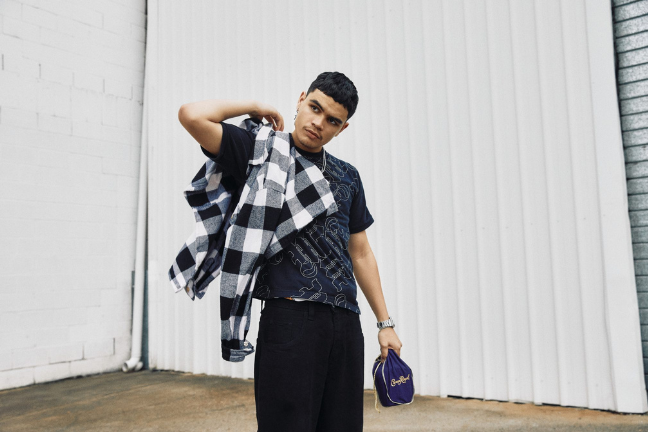 Nearing half-way through the year, here are the latest adds from our New Hip-Hop Videos From Aus playlist; as always, highlighting the latest and best videos year-round from across the AU. Don’t miss out! Subscribe to our channel to be the first across the hottest new clips. Here are a few of our weekly favs but there are hundreds to watch in our Youtube playlist! Which video are you into this week? Slam the comments with who we missed…

Creed Tha Kid shares ‘Luv Galore’ fresh off his debut project Mixed Emotions Vol. 1. The Brisbane artist teased his highly-anticipated six track EP earlier this year with its first single ‘Wind It’. Returning with his silky vocals, ‘Luv Galore’ is a pop-infused R&B love story produced by Mess and Liam Thomas, the latter of which has now produced another incredible project this year on top of Mason Dane‘s Chasing Home. Directed by Kevin Bar, the visuals from Moonboy Studios build on the song’s themes with a cybernetic twist. Mixed Emotions Vol. 1 features previously-released tracks such as ‘Swollen’ as well as some new offerings including an editorial favourite ‘Far Gone’.

Ay Huncho crosses more than map lines on his latest track titled ‘Up The Score’. The Merrylands rapper has sparked new life into drill in Australia this year with his Enemy Of The State EP and the Biordi Music posse cut, ‘Night Riders’ featuring Hooks, Hooligan Skinny, Nasa Nova and Enzo. Produced by Boss Beats and Soul, the latest unapologetic offering finds Huncho firing back with more of his street raps over the menacing and running piano trap instrumental. The provocation doesn’t stop at the bars either, with Huncho, Nasa Nova and more heading to Mount Druitt for the ‘Up The Score’ music video. Regardless of the context, Ay Huncho has been releasing his best music in 2022.

Recently joining Tigerlily for her performance at Lunar Electric, Sydney rapper Amarni now shares a dance music video for her 2022 single ‘TTK’ (Top Tier Kitty). The pop-rap track is produced by OpenTillL8 who underlines Amarni’s flirtatious flexes with punchy drums and a guitar-laden instrumental. Directed by Kyra Aoake, the music video sees ‘TTK’ given a choreographed dance brought to life by Alexandra Moore, Indigo Butlermoss, Aaliyah Paea, Shannon Coates, Georgina Shakuntala and Amarni. ‘TTK’ marks her first drop of the year following ‘Phases’, her 2021 melodic single in which she addressed both legal and family troubles.

The output from Melbourne local Jay Zayat has been on another level in 2022 and ‘Angel Eyes’ is the newest instalment. The high-energy single impressively combines the 25-year-old’s melodic flows with hard-hitting bars over EpikBeats production. Melbourne videographer and director Nick Rae snapped on the music video for ‘Angel Eyes’ with creative transitions, inverted shots and the tagged white backdrop. Jay is already nine songs deep into the year including collaborations with KILL Carter, Allison Bysouth and a joint EP with BANTA titled +jay zayat. ‘Angel Eyes’ continues to display his rightfully confident presence amidst his hot streak and there’s no signs of slowing down.

Perth duo Doss and Nino Pa’Piu get vulnerable on their new single ‘Recovery’. For their third release this year, both artists enter a moment of self-reflection and each deliver a verse about mental health, family issues and life in general. The music video is directed by Bradley Innes who shoots them in minimal colour further illustrating the dark introspection Doss and Nino find themselves in. Following their more upbeat and soulful last release ‘Keys’, this cln-produced single showcases their smooth delivery, earnest bars and the indisputable lyricism coming out of WA.

Upcoming Mount Druitt group LF70 have returned with their second drill track of the year ‘Pinegrove’.  Featuring a ruthless verse from each member, the single is put together by i.amsolo whose revered production has become heavily sought after in the local drill scene. Titled after the Sydney cemetery, the music video sees LF70 head into the night to Mounty bop over the screeching 808s and ominous strings of ‘Pinegrove’. While the drill is dead talk holds some weight, the back and forth music between some of Sydney’s most exciting drill artists teases a potential resurgence.