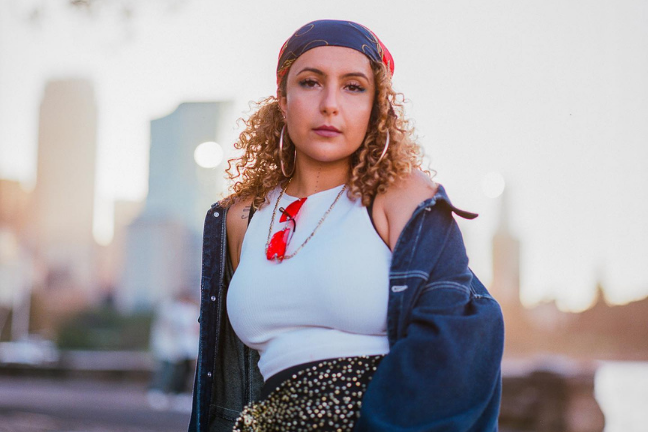 For all the glass boxes Western Sydney’s Nardean has been placed in, she’s shattered them all.

Raised in an Egyptian immigrant household, she laments she had “everything” growing up. While following the traditional life her parents had hoped – “I was studying to be an English and drama teacher” – Nardean eventually broke through her first box by trading the books for the mic in her early twenties.

“It’s natural for them to want to try to preserve Egyptian culture in our house right? But the culture they’re preserving is Egypt from 40 years ago.”

Since debuting in 2018 with her Creatress EP, Nardean has relentlessly pursued different ways to express herself and her story through genre blends of R&B, soul and hip-hop. With notable collaborations with L-Fresh The Lion and Fedi over the last few years, and her Parramatta Lanes-winning song ‘WESTSIDE’ released in 2021.

Recently, she collaborated on an NFT with the US brands Budweiser and Grainwaves, and the internet’s favourite finance personality Gary Vee – yep, it might be the most ‘out of the box’ collaborations this year but it’s not even the first time she’s working with Grainwaves. Using new ways to connect to her audience, NFT projects and platforms like Discord are being fastly incorporated in more and more artists’ album rollouts.

“I don’t need to be as big as Beyonce to live a really good life as an artist cause you can make a community.”

The new single ‘Execute’ featuring Chelsea Warner is her laser-focused latest addition accompanied by a self-edited music video shot during her 30th birthday celebrations. After releasing four singles in 2021, Nardean sets her sights on what may be her best career year yet. Deep into her creative bag both artistically and further, she continues striving towards excellence.

On top of her endeavours outside the booth, the ‘WESTSIDE’ singer is hoping to incorporate modern Egyptian and Arabic culture into her own music. Hoping to visit Egypt and make music with some of the people she’s continuously inspired by later this year, Nardean is also hoping to take up Arabic singing lessons to blend with her music.

Check out the full interview between Matthew Craig and Nardean below via our YouTube channel to learn about her culture, the acceptance of immigrants within hip-hop, and how she continues to strive forward as an artist.