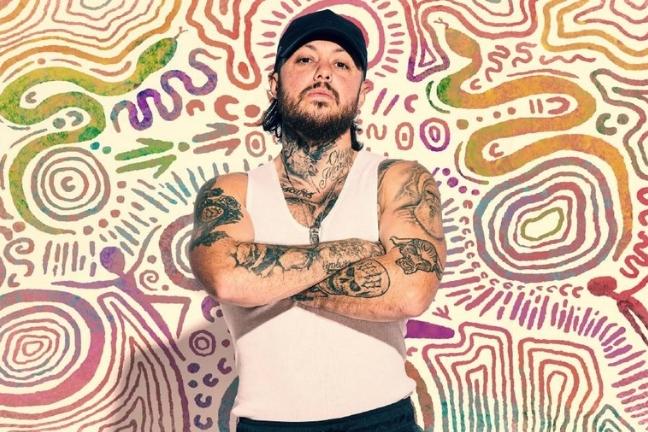 Nooky depicts a darker side of himself and his hometown in the highly anticipated Lyrebird Park EP.

The Yuin artist presents his most vulnerable work yet as he navigates through the struggles of alcoholism and industry pressures over the last few years. Titled after the Nowra sports park he frequented as a child, the release of his delayed Lyrebird Park has lifted a weight off his shoulders.

“It feels good to close that chapter and wash my hands man.”

The eight-track EP begins with the intro ‘Merriman’, where Nooky barks – “Heavy is the head that wears the crown.” Throughout Lyrebird Park, he acknowledges the mental space he was in and the heavy influence of alcohol during the recording process. Bearing such honesty in his shortcomings and priding himself on authenticity, the project’s release was necessary for moving forward.

Despite the vulnerability expressed in the music, there’s an undeniable aroma of confidence that fills the air in tracks like ‘No Mercy’, ‘Jet’ featuring Freesouls member Jamel and ‘Line Em Up’ featuring NZ’s Savage and Marty Bugatti of the Sydney group, Triple One.

With overcoming adversity being the reoccurring theme of the project, the brash and relentless trap production mirrors Nooky’s energetic cadences and lyrical attacks. Underneath the bravado and penetrating delivery, his poignant lyricism depicts the deeper nuances of his road to recovery.

“Since then and now, I’ve got clean and all that so there is a shimmer of hope when you listen to this. You can get yourself out of there.”

In recent years, Nooky’s position within the landscape of the scene has changed, adopting the role of big brother among his label mates at Bad Apples Music and becoming the host of Triple J’s Blak Out show dedicated to First Nations artists across Australia. The new platform allows Nooky to consistently highlight Indigenous talent and provide, once unattainable, opportunities to a future generation.

“Facing racism in the industry – you have to work twice as hard for twice the recognition.”

As Nooky moves past this release, his whole mindset from the original recording process has drastically changed. He vouches to be getting back to the essence from when he started and with yet another project on the horizon, Nooky fans can expect something great as he rediscovers his love for music again.

Watch the full interview between Matthew Craig and Nooky below via our YouTube channel to hear about the makings of his new EP, his changing roles in the scene and what it’s like being part of the Bad Apples Music family. Also, catch him in a quick round of AUD’$ Rapid Fire answering his first celebrity crush, dream holiday destination and who he’d collab with, dead or alive. Be sure to let us know if you’re vibing with the interview!