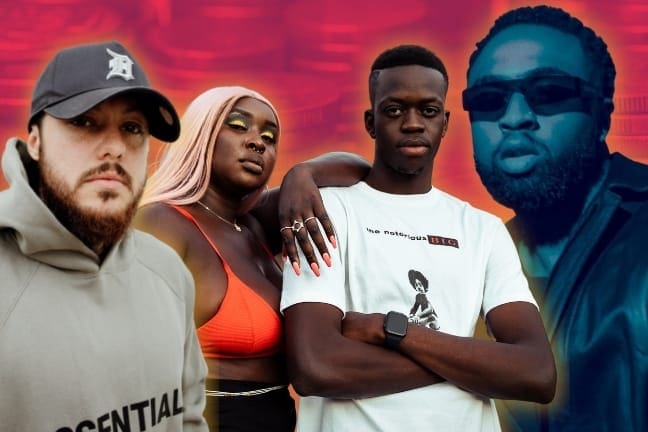 We’ve arrived at Week 36 of our New Hip-Hop Videos From Aus wrap, always the latest and best videos to drop from across the AU. Don’t miss out! Subscribe to be first with all the latest drops from down under. Which clips are you feeling this week? Be sure to slide in our comments with your favourite visuals!

Nooky and Jamel make an unexpected duo on the Nowra emcee’s second offering this year, ‘Jet’. Across the eery keys and menacing 808s of producers Yozora and Mansus, Nooky’s sharp delivery slices holes through speakers. Freesouls member Jamel doesn’t hold back either, rapping facts only in his signature autotuned vocals – “Last year I was chilling, this year I’ll be MVP.” It might not have been a collaboration you’d expect to hear, but it’s definitely one you’re going to want to check out. As his second release of the year, ‘Jet’ follows on from ‘Mungo’ with a similarly catchy and braggadocious hook. Keep talking your shit Nook.

Kwame rises to a new direction on ‘Higher’, the first of a three-part series. Following on from earlier collaborations with Kymie, Phil Fresh and Tasman Keith, ‘Higher’ is the first solo release from the Ghanian-Australian artist this year. Directed alongside Zain Ayub, Kwame does his best Risky Business one-take impression, stumbling and dancing through the house head-over-heels in love. There’s still a strong MBDTF-era Kanye influence that shines through the track with glitchy autotuned vocals and the synth-heavy Hip-hop beat produced by the Sydney artist himself. However, as we heard on his Please, Get Home Safe EP last year, Kwame begins to expand his sonics with elements of neo-soul and electronica.

No one else is creating as much buzz in their breakout year as Sahxl is, and he’s proved that again with his uplifting latest single, ‘Pick Yourself Up’. The Sydney melody maker goes 3/3 this year, following on from ‘C4’ and ‘Demons’ with a motivating melodic trap offering produced by Sid Mallick and Eiby. ‘Pick Yourself Up’ delivers the best of both his melodic edge and song writing ability, with a touching tribute line to Saiko who passed away earlier this year. The fiery music video directed by Ashi and Navrevenge ends with a snippet of an unreleased track, so it doesn’t look like the young star is slowing down any time soon.

Swish Music head honcho Dau Dau returns with his Afro-infused love letter, ‘My One’ featuring Queen P. Though we’ve received tracks from members TMB The Driver, DC Ralph and Deemenace’, ‘My One’ features the first appearance from the Ipswich collective CEO this year. Directed by Lawson Cross, Dau Dau and Queen P bring the feel-good vibes to life dancing along to their Afro-infused melodies and instrumental. The Afrobeats wave in Australia is fastly approaching the mainstream and with the warmer weather fastly approaching, ‘My One’ should be a no-brainer addition to your Summer playlist.

Triple One return in 2021 with the dark and atmospheric ‘Blood Rave’, co-produced by Melbourne artist LUCIANBLOMKAMP. With their 2020 debut album Panic Force including elements of indie rock, emo-rap, and pop; the Sydney group have always prioritised their versatility. ‘Blood Rave’ delivers their most cohesive effort yet, as Billy Gunns and LUCIANBLOMKAMP seamlessly marry spacy synths and Lil Dijon‘s hypnotic vocals with driving 808s and the rap verses of Obi and Marty. The track also arrives with a music video by Western Sydney artist Serwah Attafuah, who brings their bizarre virtual reality to life.