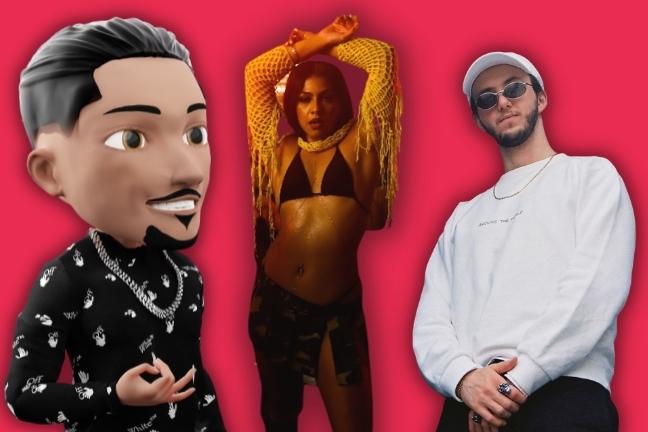 Week 6 of New Hip-Hop Videos From Aus 2022 has arrived; as always, showcasing the latest and best videos year-round from across the AU. Don’t miss out! Subscribe to our channel to be the first across the hottest new clips. Here’s a half dozen of our weekly favourites but there are hundreds to watch in our Youtube playlist! Which video are you into this week? Slam the comments with who we missed…

Kahukx’s debut record ‘Due Time’ hit a million Spotify streams in less than two months and that’s just the beginning for the anonymous Sydney artist. With ShoBeatz on production, they flip Jrilla’s ‘Beggin U’ into another drill-infused beat where he reflects on his toxic traits and relationship issues. Teaming up again with Slippn for the visuals, ‘No Bonnie & Clyde’ captures his lavish lifestyle speeding through the city and firing up the studio. With his debut HoodBars episode dropping later this week and a confirmed feature on Shely210’s upcoming project, the promising newcomer is wasting no time in 2022.

After Antihero debuted at #1 on the ARIA album charts, Huskii now shares visuals to his album’s finest and final moment, ‘Toxic’. Inspired by the 2012 film Killing Them Softly, the music video is directed by Triple One’s Marty Bugatti, who showcases the toxic highs and lows of substance abuse, unhealthy relationships and living a life of crime. ‘Toxic’ is Huskii at his artistic best, delivering introspective and poignant storytelling sprinkled with braggadocious bars over TASKER’s production. These elements are nothing new to his artistry but they’ve never been presented so polished. ‘Toxic’ unveils, in-depth, the birth of his antihero persona and his artistic evolution from the last few years.

Melbourne’s sultry singer expands “the Pania genre” on her new single, ‘tiki’. As frequent collaborator Hamley melts R&B, reggaeton and soul into the fiery late night production, Pania executes her 2022 entrance like no-one else. Her dreamy melodies sing confident and lascivious lyrics over the bouncy beat, with visuals directed by Josh Davis portraying the track’s hypnotising club energy. In her 2021 interview with AUD’$, she teased her debut EP would be coming this year and ‘tiki’ places us one step closer to the highly-anticipated release. Her releases have been few and far between but the young artist grows more commanding with every performance and it might not be the case for much longer.

Melbourne’s Mog.Y provides visuals to the newly released ‘That’s My Girl’ from his Trouble In Pacific Beach project. There’s few who possess such infectious and distinguishable vocals like that of the soulful smooth talker, Mog.Y. ‘That’s My Girl’ features jazzy hip-hop production from KropsMan and comes equipped with a sunny 3k music video by Tomise. He closed 2021 out with a showstopping performance on Posseshot’s ‘Steal My Style’ from their Cityloop mixtape and now he’s kicked the new year off with a tape of his own, featuring previously released singles ‘Bat Country’ and ‘Boo’d Outta Hell’.

The Western Sydney star Youngn Lipz continues to propel himself to new limits in and out of the music. Known for his melodic flow over trap beats, ‘Go!’ is the first step in a different direction as he experiments with a House and Dance sound produced by Open Till L8. The new single soundtracks his latest venture ‘MetaBaby66’, a collection of 66 NFT’s that grant early access to merch drops and tickets to live and MetaVerse shows. Selling out in 30 minutes, the artwork is the YL avatar animated into the music video by Moonboy Studios, where he performs the track on a private party island somewhere in the MetaVerse.

KID KEEKS – HATE ME
(You Do You Productions)

From Southeast Melbourne, Kid Keeks releases his first single of 2022, ‘Hate Me’. Over the past few years, he’s dropped with a handful of tracks including his 2020 debut, ‘Reverse’, and more recently, last year’s collaboration with Cru Kza and DIABETIC titled ‘Dumb Luck’. Aiming to intensify that momentum, his latest track follows an emo rap sound pioneered by Lil Peep in 2016. Produced by Metlast, the synth and bass-heavy instrumental finds Kid Keeks executing slightly distorted melodies and detailing the detriments of prioritizing drugs over his relationships. Accompanied with a music video by the Melbourne-based You Do You Productions, ‘Hate Me’ takes Kid Keeks into a new direction where he sounds comfortably at home.