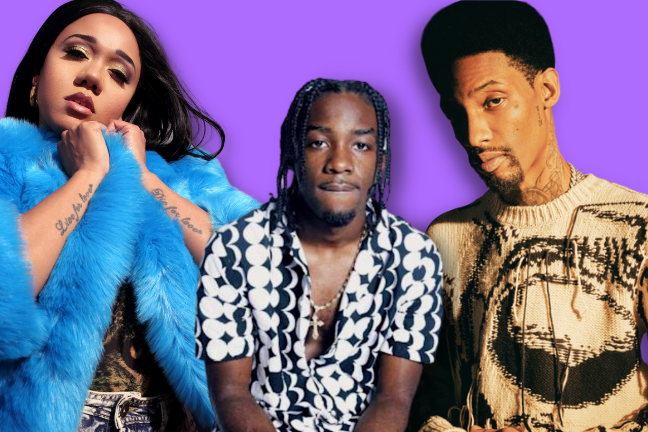 Bringing you six emerging global acts that you need to be across! From all corners of the planet, these emerging stars should be on your playlists right now! Keep it locked to FOREIGN EXCHANGE; your home to find new talent on the reg. Stay locked via our socials, and if you’re outside the AU and keen on some AUD’$ love, be sure to send us your latest drop via Submithub.

Released on the 4/20 holiday, Cmfrt and Jaheem drop a banger to bring all smokers together on ‘Facelift’ featuring Jay Coast. Growing up in St Louis, Missouri, his brother introduced him to OutKast’s music who quickly became a predominant influence on him. First debuting in 2021 with ‘Life Jacket’, his second track of the new year is a gem. ‘Facelift’ sees the Jay Coast deliver melodic and woozy vocals over the co-production of cmfrt and Jaheem who flips a sample of ‘Tardema’ by the Rias Orchestra. The trio have already announced another collaboration entitled ‘Gangsta Party’, set for release on June 17. As semifinalists in the International Music Video Awards, and based on the blueprint laid for ‘Facelift’, more success is on the horizon.

In case you missed it, ‘Need You’ by Fresco Trey absolutely blew up on TikTok. The Memphis youngin is a soulful, melodic vocalist whose storytelling and raspy delivery specialize in guitar-looped hip-hop beats. In high school, he was seriously considering pursuing a career in basketball and was well on his way there until music took over his interests. Fast forward to last year, he inked a deal with Warner Music and released his 7-song EP, Heartbreak Diaries. His second release of the year, ’24 Hours’ is a more upbeat, catchy and heartfelt offering from Fresco. Influenced by the likes of Post Malone and Justin Bieber, his hook-writing and hit-making ability can’t be questioned and if he’s able to capitalize on recent momentum, it won’t be long before he’s in everybody’s playlists.

Nolay has been a significant presence in the UK’s underground rap scene since she first emerged in 2005. Her rap alias was given to her during her youth, ‘Nolay’ referring to not being a timewaster and not laying down. You may know her from Top Boy as Mandy but Nolay introduces herself in 2022 as the Top Bitch on her recently released 5-track EP. One of the highlight tracks, ‘Trill Shit’ allows her confidence to seep through every verse and it’s easy to see how she’s stood the test of time in the scene. Being able to adapt to the changing sonics while maintaining authenticity and originality is a rare skill but one the Croydon-raised rapper has mastered.

Sonny Digital shares ‘Guess What’ featuring SSGKobe, the first single to his label debut EP Mr. Digital. The Atlanta super-producer has been the mastermind behind a lot of era-defining hits from the last decade, working with artists including Future, Drake, Kanye West and Travis Scott. The double threat enlists newcomer SSGKobe on his most recent track ‘Guess What’, where the two bounce off each other creating an infectious energy. SSGKOBE blew up after a Cole Bennett co-sign a few years ago and collaborations with Trippie Redd, $NOT and Brockhampton. ‘Guess What’ plays to both of their strengths as rappers, with a hyper-pop infused beat that allows Sonny to slide and SSGKobe to do his thing melodically.

The self-described ‘sonic omnivores’, aka They Hate Change, feed off being different. The duo, Dre and Vonne, first connected as teenagers when they lived in the same building. Living in Tampa at the time, the duo started as DJ’s and used this as an opportunity to mesh different sounds together cohesively and see how people would react. Eventually leading them into the studio to make their own music, their deep knowledge of different genres and desire to experiment has culminated in their four-track EP entitled Some Days I Hate My Voice. The focus single ‘Blatant Localism’ possesses a nostalgic and metallic feel to it, with the two emcees getting their bars off over the slow beat. For fans of the underground and experimental sounds of Injury Reserve, They Hate Change might be for you.

Hailing from North Carolina, TiaCorine’s name spread like wildfire after her SoundCloud hit ‘Stylist’ allegedly inspired Drake and DJ Khaled’s ‘Popstar’ back in 2020. Tia is from a culturally diverse family and was exposed to different types of music as a child. She was inspired by icons like Lil Kim and Trina, but it was the fellow Young Money signee, Nicki Minaj, who had the heaviest influence after her debut album Pink Friday dropped in 2010. Three years later, Tia would begin releasing music herself.  Now signed to South Coast Music Group, home to fellow North Carolina artists like DaBaby and Toosii, her latest single ‘Gas Station’ is energetic and bouncy, allowing Tia’s authenticity flow through her cadence. She absolutely slides on this, showing an effortless ability to switch up her style.