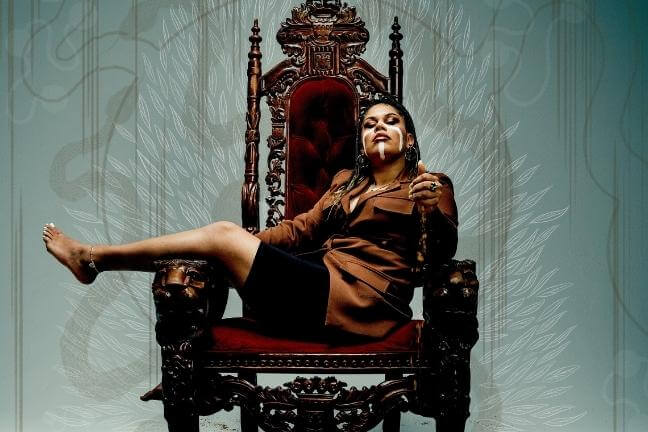 The newly anointed and unapologetic matriarch of Australian rap embodies empowerment and manifestation while celebrating the generations of Blak women both past, present, and future. The six-track EP is part of the #MobRule series featuring releases from fellow Bad Apples Music artists, Nooky and Kobie Dee.

When Barkaa joined the label in 2020, the decision was a no-brainer. After spending her teenage years incarcerated and battling with substance abuse, rap provided the South West Sydney artist with an escape from reality.

“It took me to a place where I could envision a life better than the one I’m living in.”

Blak Matriarchy begins with a sample from actress Shareena Clanton – “I am tired of begging and asking for our humanity. When is it enough?” On the eponymous opening track, Barkaa uses her penetrative lyricism, over the thunderous production of Scoundrel and Vyva, to shine a light on Australia’s dark history. From rap battling for grog to making emotive reflections and social commentary, Barkaa’s anthemic conviction has been forged over a lifetime of experiences as an Indigenous woman.

‘Godz’, a lighter track yet with all the same potency, finds Barkaa taking a well-deserved moment to flex her successes and celebrate her resilience, telling haters, “I am not destined to cater to pricks.” When the beat flips from summery keys to soulful 90s hip-hop production, she almost resembles the cadence of Lauryn Hill with the brashness of Queen Latifah. Comparisons should be taken lightly though because Barkaa is one of a kind, setting the precedent for Indigenous female representation in the scene. However, she recognises she “stands on the soldiers of giants.”

The EP follows on with the fiery and cheeky single, ‘King Brown’, accompanied by a Sonder Films-directed music video in July 2021. As her biggest hit, ‘King Brown’ showcases Barkaa’s powerful storytelling and presence over the high-energy and Latin-influenced instrumental.

The same is proved in grittier moments like ‘Bow Down’ and more poignant tracks like her all-time favourite, ‘Come Back’ featuring Mi-kaisha. The 26-year-old shares moments of resilience, authenticity and empowerment in her masterfully crafted debut EP. With all three values held high by the rest of the Bad Apples Music team, Blak Matriarchy concludes with a slick posse cut remix of her 2020 track ‘Groovy’ featuring Briggs, Nooky, Kobie Dee and Birdz.

“It’s just been amazing to connect with so many amazing people and live my childhood dream – it’s huge to be able to say that I made it happen for little me.”

Watch the full interview between Matthew Craig and BARKAA below via our YouTube channel where she talks about her debut project, being signed to Bad Apples Music and carrying her culture and community on her back. Also catch her in a quick round of AUD’$ Rapid Fire answering her dream collab, celebrity crush, and what cartoon character she’d kick it with for a day. Be sure to let us know your thoughts on the interview in the comments!