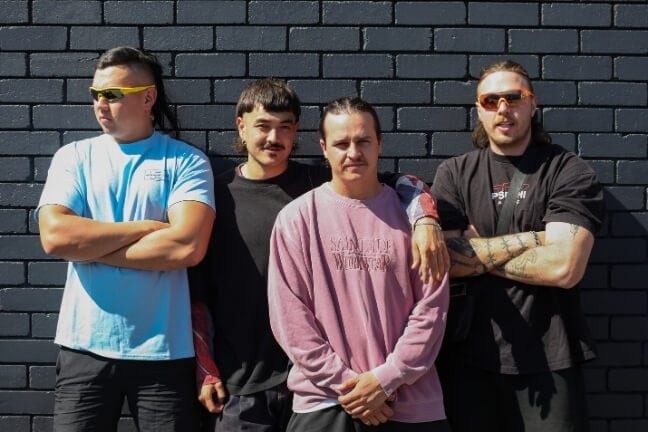 A staple in the underground Sydney hip-hop scene since “Doozy” beginnings in 2016, Through three EP’s and mainstream hits, “Butter” and “So Easy”, Triple One have amassed an international fanbase that has long expected a full-length project. With the versatile production of Billy Gunns, Lil Dijon’s melodic croons and the clash of styles between Obi Ill Terror’s cloud rap and Marty Bugatti’s Australian influence, it’s an enigmatic chemistry that keeps their sound so distinctive.

The album is set in a hypothetical 2020, yet the premise isn’t too far-fetched with the year we’re having. Panic Force are a squadron of elite agents deployed to Earth to collect art and relics of civilisations before their destruction. Triple One create the album as a tribute to Panic Force, however, the Galactic Council deem the band too insignificant to be preserved. Sure enough, humanity destroys the Earth and the album remains in a platinum-plated briefcase, only to be rediscovered in 4020. The Galactic Council biblically begin to reseed human life on Earth with the bio-engineered, Sam and Sandy, who are ordered to never wander past their garden and into the shadows of the buried civilisation. Before long, the two do just that and find the album, allowing it to corrupt them and restart the eternal loop of a brutal demise. 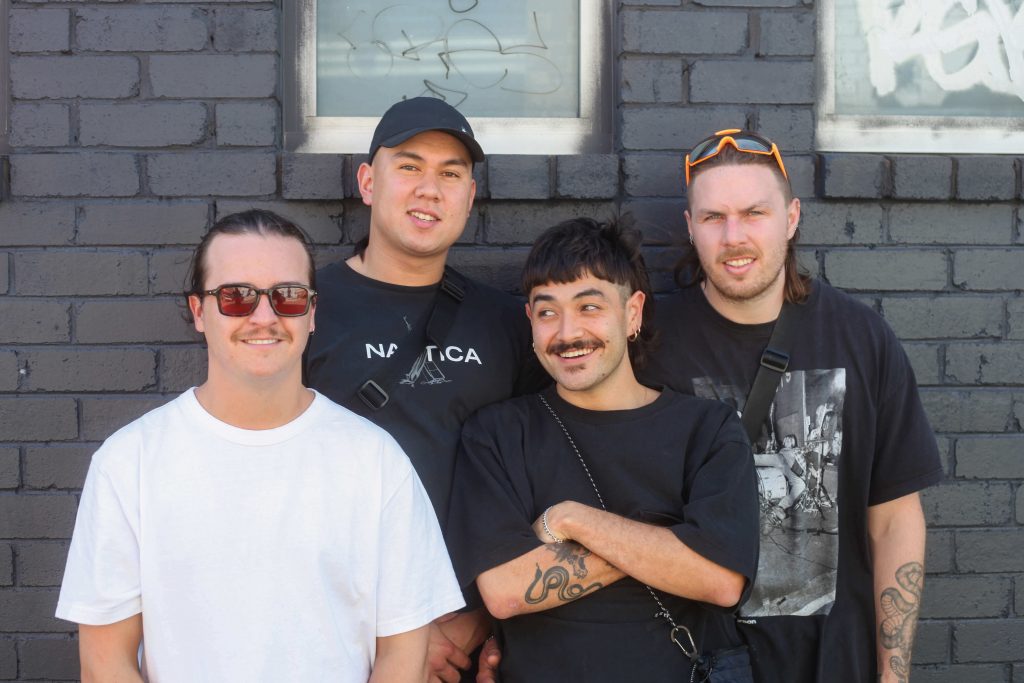 It’s a self-deprecating plot that matches the band’s themes of love, self-loathing and substance addiction. Panic Force is a collection of twelve tracks featuring Triple One’s most ambitious work to date and highlights each member’s best attributes. Helping with, what they estimate to be about 80% of the album’s production, 18YOMAN tagged along to their writing trips to places like Foster and Magic Mountain to escape the city and lock-in.

“Usually we hire a house and set up our own DIY studio there, it helps our headspace when we are all together and there with the sole purpose of making music. Other members of our team float in and out during the week to help keep the vibes and energy up. We always come back with a handful of tracks and then flesh them out. With Panic Force, some of the tracks are three years old, some of them a few months. They were born on these writing tracks and sharpened into what you hear on the album…”

The album blasts off with “Space Boogie Anthem”, a track that sees the three vocalists trading bar for bar over Billy Gunns whistling production of 80s synth and leads. It starts the album on a high note and features some comedic lines from the rappers including Obi’s closing line, “F*ck Nerve, my shit way harder.” While it’s all in good nature, Obi said he often receives messages from both fan bases not understanding the friendly banter that it is.

The album continues with the second single “Salina” and Marty’s favourite “Pleasure Island”. Especially in the latter, Lil Dijon’s vocals soar across the two tracks while Obi and Marty deliver some of their best verses about heartbreak and self-destruction on “Salina”. As no surprise, Panic Force features a catalogue of different genres and sounds and effectively expands the group’s range. In particular, Obi experiments more with his singing chops to complement and contrast well with Dijon on their last single “Sunshine” and “Where Is He?” First crafted in 2017, “Sunshine” is a brighter cut featuring the radio static soul sample from The Dixie Nightingales. This is the first time we’ve heard Billy Gunns work on sample-based production, and it’s only right even their production would be as versatile and adaptable as the group’s vocalists. Adding to that, the band mentioned Bill has lately been working on beats with 80s synths and leads. Heading into the dynamic guts of the project, Triple One introduces some of their most ambitious work to date, a conscious decision to constantly evolve.

“We established very early on in our career that we never wanted to sound like anybody else. It helps us creatively when we’re constantly making new sounds or incorporating different influences without fear or judgement,” Triple One said.

“It helps us grow our brains and nobody wants to make the same shit over and over again.”

They return to their underground intensity on “Panic Force”, with its brash bars, and forceful, hard-hitting instrumental. As “Skinless Man” teeters on the edge of surf rock, Marty imposes his talent in a sound where he’s is unexpectedly comfortable. The mellow track of “Crylence” features the clearer and softer singing from Dijon and a standout verse from Obi. While he doesn’t appear on “Crylence”, Marty marks his return on “Yap! Yap! Yap!” The metal centric cut taps into some of Obi and Billy’s earliest influences and caters to Marty with the beat switch to a heavier trap sound.

“Billy & Obi grew up on a lot of punk rock and metal which we have explored in the past, but probably most thoroughly on Panic Force. I don’t know why all our sounds work together since we are all so eclectic with our personal tastes, but it just does!”

The album closes with a strong hit of emo-rap tracks like “Where Is He?” and “The Conformist”. With its running bass reminiscent of one of Obi’s influences, Lil Peep, “Where Is He?” is a song that grows on you with each listen. Initially, the transition from punk, emo rock and pop-rap across each song can leave a distinct taste. However, this is Triple One and it would be foolish to expect anything less than impressive genre fluidity. Panic Force ends with the first released single “Loverose” and Obi’s favourite track, “Wait4Me”.

Panic Force is an album that the Australian scene has anticipated for a while. From underground icons to breaking into the pop world, Triple One hit the mark of the middle ground. Their influences are often caught in the forefront but the chemistry and variety between the group help to set them apart. The album features Billy Gunns most unique production as an indication of his evolution. Obi Ill Terrors sonic vision seems to shine through the brightest with Lil Dijon completing every track by singing his lungs out. Last but never least, Marty Bugatti impresses with his versatility and power to add the balance to Triple One’s style. All in all, Triple One deliver a well-crafted debut project that fleshes out their undefinable sound and brings forward the best effort from all members.