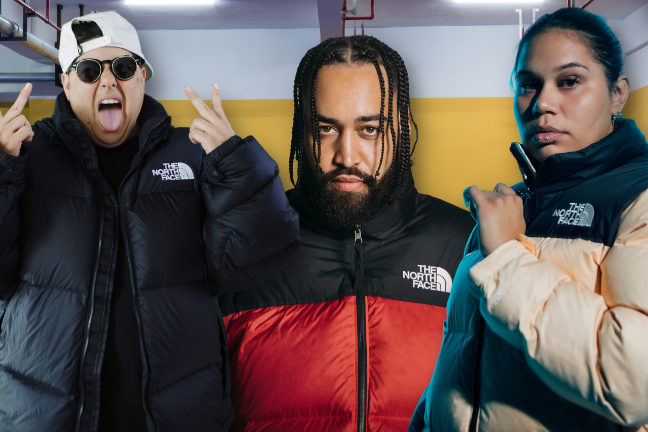 What began in 1966 as a company intent on revolutionizing functional outdoor gear and activewear, has since become one of the most influential brands in the world, commanding its position in hip-hop and streetwear for over 30 years.

The North Face has garnered a reputation for keeping people warm, dry and protected as they scale mountains, saunter through the snow or brave the brutal February rains in New York City. But over the last few decades, co-signs from hip-hop archetypes have led to the brand establishing a die-hard, sartorially-minded following for its resolutely simple yet instantly recognizable style.

Once you understand its roots, the company’s enduring influence starts to make a lot of sense. In 1966, two years before the brand released its first product, The North Face was just a humble shop in San Francisco run by founder Doug Tompkins. Here, he hosted live shows by The Grateful Dead, which quickly led to the store becoming a melting pot of culture, with everyone from expert climbers and the beat generation using the store as a hub. By 1968, the company was acquired by Kenneth Klopp who changed the direction of the brand and began producing its now ubiquitous apparel.

It would be 20 years later, that another burgeoning subculture would begin to forge an identity. Born in the streets of New York, hip-hop’s beginnings were helmed by larger-than-life personalities creating music punctuated by raw manifestos and ricocheting rhymes. Hip-hop may have initially appeared to be the antithesis of mountain climbing and GORE-TEX, but it wouldn’t be long before rappers and The North Face formed a mutual relationship, cementing the brand’s prestige in streetwear.

In 1992, The North Face unveiled the iconic Nuptse jacket. Its boxy cut, exuberant block colourways and goose down insulation gave it immediate cult status in New York; a culmination of style and function in a city where the winters are brutally cold. Soon after, rappers like Method Man and LL Cool J started repping the brand.

“I remember seeing Method Man one time wearing a black joint [jacket] and smoking something and it looked wild as hell,” B Wise explained on a call. Since he was a young kid growing up in the suburbs of Sydney, the rapper always wanted to own something from The North Face, but not just anything — he wanted a Nuptse jacket.

“It was always something you’d see in music videos, and as a student of rap culture I was always a fan of that. Growing up then, you know being in high school I didn’t really have the funds so I’d ask mum and dad, ‘Yo, can you get me that?’”

Wise didn’t get his hands on his first piece from The North Face until he stumbled upon one years later in an op-shop, but that only fueled his desire to own more. Since then he’s gone on to invest in a bright red and black Nuptse, which he holds up to the camera like a trophy. Wise admits that even though Australia’s climate isn’t ideal for the insulation the Nuptse provides, it hasn’t stemmed the brand’s cultural force.

I’m a huge fan of The North Face,” Blake James Turnell, better known as Chillinit tells me in an email. “Even in summer I’ll wear the shirts and shorts.” A cursory Google search immediately shows Turnell putting his money where his mouth is. For Apple Music‘s Beats 1 Studio, Fire In The Booth the Sydney rapper donned a slick, all-black Nupste, and for an interview with triple j, he slipped on a bright cobalt and black Nuptse.

Then there’s up and coming star, 22-year-old Sydney rapper Mason Dane who name-checked the brand on his 2021 hit, ‘Stay Down‘. “They wonder why we stay so fuckin’ cold when it’s hundred degrees,” he bellows. “North Face the jumper and tee, she wanna bump in the sheets.”

“To see this trend here on the streets of Sydney and Melbourne magnifies what this iconic jacket means to those who wear it. Exploration is a mindset, both on and off the mountain.”

The brand’s presence in Australia isn’t anything new, with its prominence beginning well over 30 years ago, as the Nuptse Jacket was introduced in the US. This is largely thanks to a magazine beloved by every hip-hop fan, The Source. With The North Face advertising in The Source in the ‘90s, it was able to reach an audience here and become aspirational. Without any internet, the magazine was Australia’s connection to the US hip-hop scene. So eventually the heavy, army surplus aesthetic found its way to our shores, with The North Face becoming the gold standard for down jackets.

So what makes The North Face and the Nupste so timeless? The brand’s ability to stay relevant.

From the monogram-madness of the Gucci collaboration, the flagrantly fun silhouettes of the MM6 Margiela partnership to the minimalist take from Junya Watanabe, The North Face has effectively cemented its position at the forefront of fashion by working with equally innovative designers. Most collectors, however,  will point to the brand’s  continued relationship with cult New York skate brand, Supreme for some of The North Face’s most highly sought after pieces; whether that’s the 2016 Nuptse puffer swathed in an overlay of crunchy, autumnal leaves or the instantly recognizable red and black Nuptse emblazoned with the phrase, “by any means necessary.”