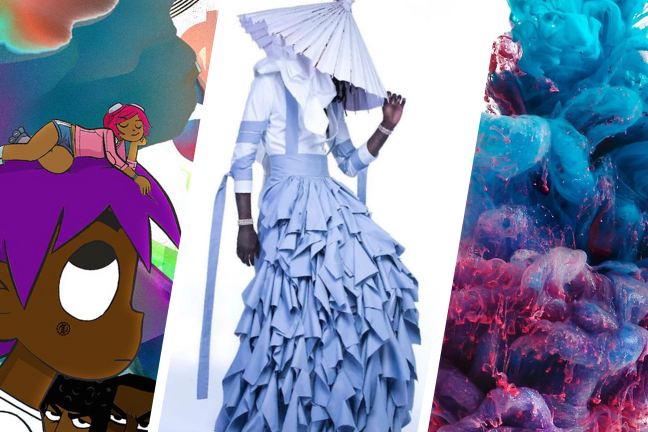 Album artwork can tend to make or break an album experience. Mood, ambiance, and more often than not, merchandise are all influenced by the tone set by the album art. Sometimes too, the quality of the music. There have been countless iconic covers in hip-hop history but today, we’ve looked back on the most memorable album artworks from the last decade. Let us know which are your favourites, and which me might have missed!

Named after the now knocked down Houston theme-park, Travis Scott‘s Astroworld featured an all-star cast including The Weeknd, Drake, 21 Savage, Gunna, Kid Cudi and more. Designed by pop surrealist photographer David LaChapelle, the giant gold head was used across the world for the album’s marketing. No stranger to using his cover arts in conjunction with his merchandising, the 2018-released album has become one of the biggest moments in recent rap history. While its legacy has been tarnished from the tragic events of Astroworld Festival last year, there’s no denying the trajectory the album skyrocketed Travis to.

Future‘s output has always been unmatched and Dirty Sprite 2 is argued to be the best trap album ever, directly influencing the sound in the years that would follow. With hits like ‘Thought It Was A Drought’ dominating for years, DS2 solidified Future. The artwork was originally a stock image taken by a Slovenian artist Sanja Tošić, who had never heard of Future. She submitted images to Shuttershock, a stock image company and only learned about the album upon an interview approach. Sanja immediately listened to the album and became a Future fan. There was circulation of the same image being used on chemistry textbooks at high schools around the time and for that, Dirty Sprite 2 is nothing short of iconic.

Playboi Carti is one of the most polarising artists within hip-hop and his debut album Die Lit is the foundation of what we see from him and a lot more artists today. Known for the Pierre Bourne produced beats like the massive hit ‘Magnolia’, Die Lit boasts features from Young Thug, Nicki Minaj, Skepta and more. Released via AWGE Label, the artwork was originally revealed by A$AP Rocky and shot by Nick Walker who based the cover concept on a reference photo from an old punk rock show. The unhinged and loose style of Walker’s photography paired perfectly with the daring energy and execution of Playboi Carti.

The Life Of Pablo is marked as the latest and last Kanye West cover designed by Virgil Abloh. The peach orange backdrop is now synonymous with that era of Ye as its unconventional cover aimed to change the scope of album artwork like he had done sonically with his previous two projects. TLOP was designed by Belgium artist Peter De Potter who is renowned for his prominence on Tumblr, specialising in collages and compilations. One of Ye’s most beloved projects, the unique cover of TLOP serves as a reminder of 2016 with Yeezy Season 3 and the turning tide of hip-hop that shortly ensued.

Whenever Beyonce drops, the world listens. The surprise release of her sixth studio album Lemonade sent the world into shock with 12 new tracks and an accompanying hour-long HBO film. She addressed the infidelity allegations toward her husband Jay-Z as well as exploring accountability, self-worth and the experience of a Black woman in America. The album cover is a still image from the film directed by Beyonce, Kahlil Joseph, Melina Matsoukas and Mark Romanek. Exclusively premiered through Tidal, Lemonade was her most personal entry to date and marked an era-defining moment in music and pop culture history.

Blonde is to music what Steph Curry was to basketball in 2016 – unanimously the league’s MVP. It was Frank’s second studio album after the highly revered Channel Orange in 2012 and is easily one of the best projects this century. From the vocal performance to the topics Frank touched on, it was nothing short of incredible and the album cover encapsulated that. Shot by Wolfgang Tillmans, he left the definitive meaning up for interpretation, capturing a moment in time both culturally and musically. It’s undoubtedly a timeless classic and beloved by the masses.

The self-titled collaborative debut from duo Killer Mike and El-P was released in 2013 and followed by multiple iterations in the subsequent sequels. Taking inspiration from legendary rap iconography like the Wu-Tang Clan‘s Wu symbol, the original artwork was designed by illustrator Nick Gazin. It was El-P’s idea to keep it as the sole imagery on RTJ 2, 3 and 4 with the hand sign actually representing a stick up, with the fist handing over the chain. Since used on the cover of multiple Marvel comics and in video games like Gears of War 4, the pistol and fist has transcended music and taken on a life of its own.

Young Thug has always been against the grain and Jeffrey cemented this sentiment in 2016. On the cover of his fourth commercial mixtape, photographer Garfield Lamond captures Thugga posing in a purple dress crafted by Italian designer Alessandro Trincone. Young Thug pushed boundaries with Jeffrey by redefining what a rap vocalist can do and combatting hip-hop’s historically homophobic past in a dress designed with an androgynous identity. Young Thug walked so Harry Styles could run and take most of the praises, but real ones know that Thugga did it first.

Benny The Butcher is synonymous with gritty street rap, cross referencing famous mafia and crime movies and relating them back to real life, evident with his Griselda crew. The artwork for The Plugs I Met is a still-capture from the 1983-film Scarface, with both characters’ eyes blanked out. It was the start of an incredible album run from Benny which is currently helping coke rap pushed back into the fold. While not the first album in his discography he’s used this type of artwork, it became an instant sensation and is something Benny, and the internet, reimagine frequently.

Often debated as Kendrick Lamar’s best album, the cover of To Pimp A Butterfly was shot by Denis Rouvre and masterfully matches the music. It monochromatically captures Kendrick alongside childhood friends outside of the White House, standing victorious over a judge with his eyes crossed out. The artwork symbolises the power that the gavel has over-oppressed communities and the failure of the law to sympathise with their environment. Moreover, it represents a rightful return of power to the people. Widely regarded as his most important projects, the legacy of the music and artwork of To Pimp A Butterfly will live forever.

Nothing Was The Same accurately summarises the 2010s era of music accompanied with its iconic artwork. With a prime example of Drake’s strengths from the radio pop hits, the emotional R&B to the bar-heavy inclusions, Drake delivered the perfect follow up to Take Care. After noticing Kadir Nelson‘s artwork at the studio he was recording at, Drake reached out and the two collaborated on the cover. Originally a full-sized painting crafted out of oil and linen, it pictures a younger Drizzy looking face to face with his 2013 self that would become the cover for the deluxe. NWTS added Drake to an iconic group of rappers who’ve used their childhood photos on album covers like Nas‘ Illmatic and Notorious B.I.G‘s Ready To Die.

What could almost be a greatest hits album, Lil Uzi Vert exploded onto the scene in 2016 with his genre-bending punk rock and rap style. Hits like ‘Money Longer’ and ‘You Was Right’ became anthems, transporting Uzi to the forefront of the SoundCloud rap era. The artwork was designed by the iconic Japanese artist Takashi Murakami who previously designed Kanye West’s ‘Graduation’ cover and would go on to design the Kids See Ghosts artwork among many other enduring projects. Undoubtedly a staple of the 2010s,  the artwork perfectly summarised Uzi’s attitude and style in an aesthetically perfect manner.