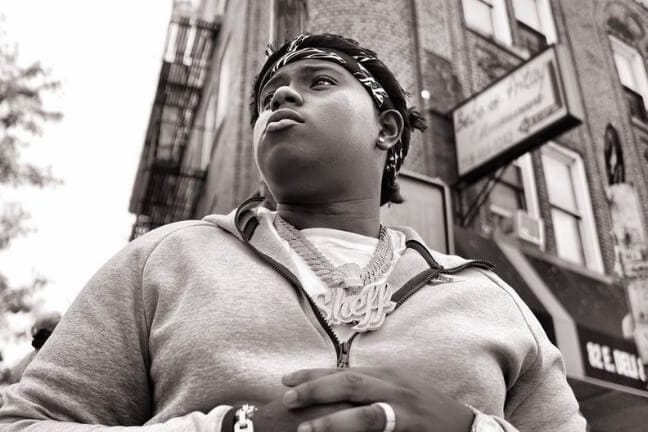 It’s been a rapid ascent for Brooklyn rap prodigy Sheff G. It was only in May 2017 that he first uploaded freestyle track ‘No Suburban’ to Youtube. The mobbed out street clip had the vocal performance of a man from the Big Apple, but replaced the classic NY drum and kick syncopation for the booming 808’s slides of East London. Regardless of the alleged diss aimed at fellow Brooklyn native 22Gz, the clip went viral and catapulted Sheff G to global status as a pioneer of New York Drill alongside the late Pop Smoke.

In that time he’s released 3 projects, drawn comparisons to Biggie Smalls and 50 Cent, and signed a recent imprint with RCA for his Winner’s Circle collective founded alongside friend and close collaborator Sleep Hallow.

Speaking of the journey he states matter of fact; “It was a hard path, it was a mission, we got it done though.”

Born into a crowded Caribbean household in the heart of Flatbush, the self-assured yet humble 23 year old believes he always saw the future coming. Combining the worlds of Chicago Drill born of Chief Keef and Lil Durk with the emerging wave from the UK, it was no accident that he chose to upload freestyle clips on British Hip-Hop platforms, putting his art in front of people with whom it would resonate; “I used to tell everybody; everything is gonna be as one.”

The ascent was quick, 2019’s ‘The Unluccy Luccy Kid’ put him on playlists around the world and gave him a level of notoriety which motivated him to move out of Brooklyn. “You’re gonna get famous before you get rich, so you gotta know where to move” he imparts to other young artists experiencing a similar trajectory.

Despite the chaos of 2020, Sheff G has managed to remain incredibly consistent on the release front. In the lead up to this week’s ‘Proud Of Me Now’ he dropped 12 track mixtape ‘One And Only‘ which featured the long awaited sequel in ‘No Suburban, Pt. 2′.

The debut studio project is his most ambitious yet, free from the weight of expectation, instead he feels a licence to create and promises diversity of the album; “Every day you wake up with different emotions. And so you need music for different moments…”

Whether it be the anthemic fan-favourite moments on lead single ‘No Negotiations’ to the more melodic experimentation on ‘Shooting Star’ it’s evident the self-assured Brooklyn boy with the deep voice is a force to be reckoned with in the new generation of hip-hop.

Continuing to create and push himself in all areas is the blueprint; “I just wanna keep levelling up. Just keep going” he contemplates on the future of Sheff G.

Watch the full interview between Matthew Craig and Sheff G below via our Youtube channel where he talks Pioneering NY Drill, Lessons From the Come Up, Being Yourself, and does a round of AUD’$ Rapid Fire talking about his first crush. Be sure to like, subscribe, and leave your thoughts in the comments.