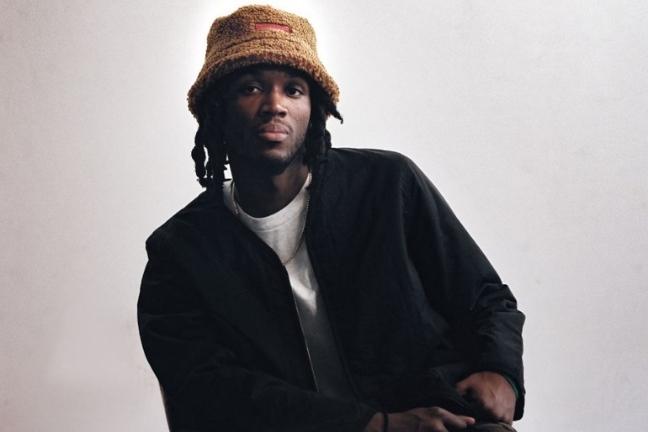 Saba first popped onto rap-fan radars almost ten years ago, with his mesmerising feature on Chance The Rapper’s ‘Everybody’s Something’ from his mixtape classic Acid Rap in 2013. At the time, the 27-year-old felt like “it was just a small footnote”. Though as their independent careers skyrocketed and Chicago’s rich and diverse DIY local scene blossomed, it’s collaborations like this that fostered the city’s early growth into their exciting Renaissance era.

“The most important thing in my life that happened, in terms of my career, was meeting other like-minded individuals in the city, you know, meeting Chance, meeting Noname, meeting Mick Jenkins.”

While Saba’s music is deeply personal, the experiences and emotions are shared throughout his community and the wider world. Recognising this, the now LA-based artist always surrounds himself with an evolving but thoughtfully selective choice of collaborators.

The ethos of his 2016 debut album, Bucket List Project, was that time is of the essence – something that Saba and his listeners faced the hard reality of in the following project, his critically acclaimed CARE FOR ME. The 2018 AOTY contender found him grieving the death of his cousin John Walt from the year prior as he introspectively explores survivor’s guilt and toxic relationships, with undertones of the systemic injustice and pressure that his life has been entrenched in.

Posting to his Instagram on release day, Saba wrote – “I understand how it’s easy to only get grief and loss and suffering out of my music but let’s acknowledge the full spectrum of black emotion when dealing with this album. We grieve. And we also celebrate. And we fuck. And we get money. And we been broke. And we get happy. And we get high. And we are more than one thing all the same time.”

The Pivot Gang cofounder leads listeners through an expansive sonic experience that begins with Cheflee’s soft and dreamy vocals on ‘Free Samples’. Saba describes Few Good Things as “an open dialogue with myself”, wherein his first verse of the album he raps about growing up in the Windy City and becoming the artist he is now, confessing in the final bar “that this gets harder the bigger you get.”

The often angelic production on FTG is intentionally carefree across its sounds of soulful R&B, jazzy hip-hop, and Chicago drill and trap. Across every change in mood, Saba meticulously executes an impressive variety of cadences across every change in mood, the first of which coming between the sun-soaked ‘One Way or Every N**** With a Budget’ to his fierce collaboration with G Herbo on ‘Survivor’s Guilt’.

Even the two initial singles, the funk-infused ‘Fearmonger’ and the drill heavy ‘Stop That’ – two of the dimmer joints on the project – provide an enjoyable showcase of Saba’s multi-faceted flows and hooks in the context of varying emotions. Throughout the creative process, the rapper/producer learned to count his blessings throughout the process after searching for exterior fulfillment.

In the guts of the album, Saba connects with his Pivot Gang collective for ‘Soldier’, enlists 6LACK and fellow Ghetto Sage member Smino for their dreamy ‘Still’ collaboration and shares ‘Come My Way’, originally recorded in 2018 and complete with a feature from Bone Thugs-n-Harmony member Krayzie Bone.

“Before Krayzie was even on it, it was kind of indirectly an ode to Bone Thugs-N-Harmony even with just what I did. It’s a dream come true for me to land a collab like that.”

His third studio album ends on the high of ‘2012’, a nostalgic and pensive love story aided by producer and songwriter Day Wave and the three-part 7-minute long eponymous closer featuring rap great Black Thought and Eryn Allen Kane. In six bars, Saba concludes the thematic duality of good and bad, light and dark, dream and reality, rapping – “Just lost a friend to an overdose, made me question what I’m even sober for. ‘Cause I used to think I was scared to die, but I don’t even know no more. Look ma, I made it, it’s like we dreamed. Look ma, I made it, it’s make-believe.”

Few Good Things is a celebration of life and all of what comes with it including the lingering trauma and moments of melancholy that Saba has previously been engrossed in. It’s an optimistic and joyful return from the Chicago artist who’s reached grief’s final stage of acceptance and chosen to embrace life but more than that, Saba bares his honest all and allows FTG to depict the juxtaposition of humanity.

Check out the full interview between Saba and Matthew Craig below as he talks about his love for Australia, Chicago’s Renaissance, and his newly released third studio album, Few Good Things.