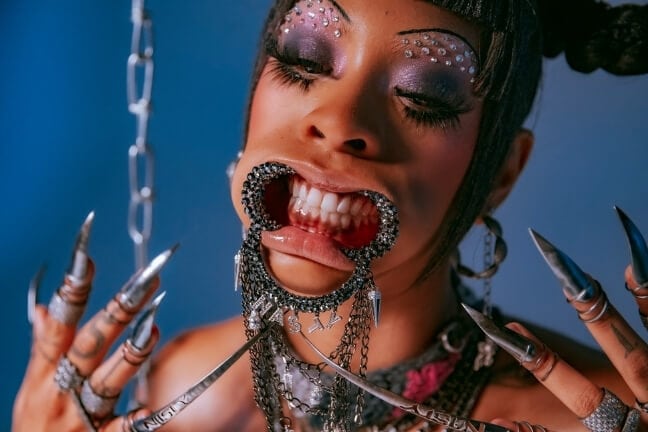 After bursting on to the scene just over 3 years ago with bright green hair, brash raps and an unapologetic ‘Don’t Give a Fuck!’ attitude, Rico Nasty has matured into an artist focused on empowerment of the marginalised. We caught up with her following the release of her debut studio album ‘Nightmare Vacation’ to discuss the project, life in 2020 and what the future may hold.

Hyper-pop. Sugar-trap. Soundcloud centric raps. There’s a million ways to describe the unique brand of art crafted by the 23-year old recording artist. Rising to popularity with Nickelodeon themed tracks “iCarly” and “Hey Arnold”, the Maryland rapper has grown into one of the most unique identities within Hip-hop. Since 2016, Rico Nasty has featured on countless movie soundtracks, appeared in the XXL Freshman class of 2019 and released a handful of mixtapes, including her 2019 collaboration with Kenny Beats, Anger Management.

Whether it’s a cute and playful singalong or an electronic anthem of distorted scream-rap, the 23 year-old artist has built a career off clashing styles to form what she coins, ‘Sugar Trap’. No matter the situation. Rico Nasty stays uncompromisingly herself. It’s evident from our discussions, and from the cuts on the new record, that she has evolved. In the midst of a pandemic, with a now 5 year old son Cam, and a Savage x Fenty collab under her belt, she found time to explore new sonics and themes on ‘Nightmare Vacation’.

“There’s topics on this album that I touched on, that you couldn’t pay me to touch on two years ago.”

It’s clear that her maturation has occurred both in terms of content AND sonics. Far from feeling burdened by expectation of a major label debut, she finds freedom in the endorsement, seeing it as an opportunity to give her fans something new. While tracks like ‘Check Me Out’, ‘STFU’ and ‘OHFR?’ bring the quintessential, brazen delivery for which she is admired, it’s cuts such as ‘IPHONE’, ‘Back & Forth’ (with Amine), and ‘Loser’ (with Trippie Redd), where she slides into a more introspective and melodic lane, that show off her musical evolution.

When speaking on the latter she states; “It’s just a very flowy, island type of vibe; melodic but still grungy. I feel like I did a good job balancing the two on this song which is very rare. It’s not a lot of times that we get melodic Rico with crazy Rico!”

It’s evident that music is merely one element to the ever increasing creative repertoire that Rico Nasty possesses. Having recently launched her own make-up collaboration, she states excitedly that shoes are the next endeavour on the horizon. With the underlying message behind all of her tireless work being that if she can do it; so can you.

“I want you guys to taking power from this album. I want everybody to walk away from this album feeling powerful.  Feeling like I can do anything right now. It doesn’t have to be perfect to be good. That’s what life has been like for me.”

Watch the full interview between Matthew Craig and Rico Nasty below via our Youtube channel where she talks Nightmare Vacation, Being Yourself, and does a round of AUD’$ Speed Dating. Be sure to like, subscribe, and leave your thoughts in the comments. ?