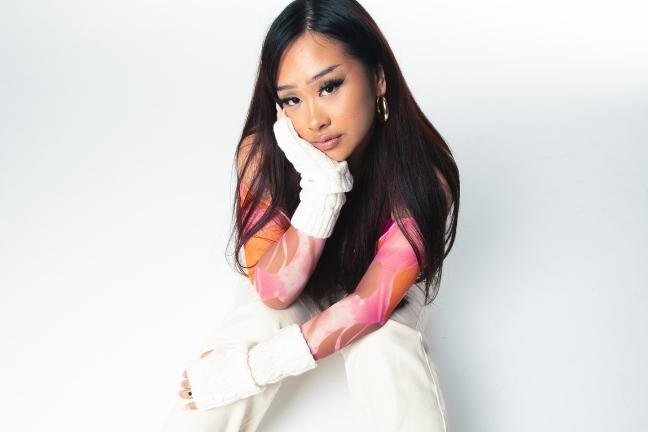 Reyanna Maria enters her sophomore year with some international co-signs already under her belt and an even bigger 2022 planned ahead.

The Filipina-Australian artist first started writing music when she was 14-years-old but never would have guessed that five years later, a viral challenge would spawn her wildly successful debut single, ‘So Pretty’. Signing to Victor Victor Worldwide and visiting Los Angeles to further develop her career, she has since garnered 28-million-plus Spotify streams, over 100 million views on Tik-Tok and a Remix featuring Tyga.

“I still haven’t really processed it. Sometimes I’ll be in my room and I’ll be like ‘true, I have a song with Tyga. That’s fucking hectic.’”

Making the most out of any debut, Reyanna followed her provocative opening rap performances with an R&B focus on ‘What’s Your Sign’ and  ‘Used 2’. Citing Ariana Grande and Doja Cat as her main inspirations, the influence can be heard in her sultry melodies and playful, though sometimes venomous, lyricism. Now based back in Melbourne, she’s determined to further showcase herself and the local talent that surrounds her.

“I’m excited to show what Melbourne can do for the sound. I think a lot of our music is amazing and it needs to be shared with the world.”

Reyanna began the new year with a sparkling and unapologetic new single, ‘Loser’. Produced by CYNDCUT, she laments a past relationship while radiating self-confidence and independence singing – “You shoulda been grateful that I chose yo’ ass. If it wasn’t for me, you would be nobody.”

More recently, Reyanna Maria dropped ‘Nintendo’ with fellow 3k artist JXN, who’s worked with A Boogie Wit Da Hoodie, A$AP Twelvyy, Allday and Fossa Beats. On the pop-R&B summer bop, he tries to read the mixed signals and figure out the love games that Maria admits to in her verse. ‘Nintendo’ catches Reyanna in a new light, backdropped by 90s R&B nostalgia and accompanied by the light-hearted hip-hop style of JXN.

For the rest of 2022, the young musician will be readying another single, excitedly planning live shows and a couple of music videos before eventually sharing her debut EP. Teasing she’s been trialling sounds of Afrobeats and drum and bass, Reyanna Maria is eager to continue pushing her limits.

“Mostly, I want to go back to LA and make more music and experiment more over there.”

Watch the full interview between Matthew Craig and Reyanna Maria below as she talks about the viral start to her career, her family’s response to her music and what’s next in 2022. Be sure to let us know if you’re vibing with the interview!