RAP, POP, R&B: IS THERE ANYTHING TIERRA WHACK CAN’T DO?! 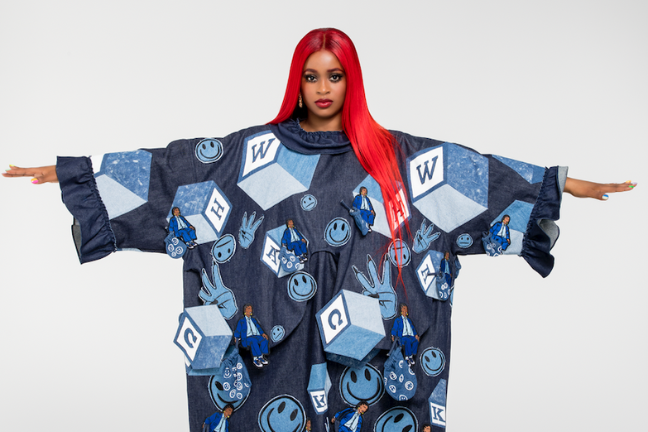 If you’re not already, Tierra Whack is a name that you should be familiar with. Alongside artists like Lil Uzi Vert and Meek Mill, she’s a significant constellation under the immense telescope of talent emerging from Philadelphia. Speaking exclusively backstage before her show in Melbourne last week, her intelligence and calm thought process shone through as she inquisitively coloured in and reminisced on her favourite Dr. Seuss books.

Like a lot of artists, music was an escape for Tierra. Intrigued by Dr. Seuss’ use of literature as a child, she adopted his style, rhyming wherever she could. Down the line, she shifted into spoken word and battle rap as a teenager. Tierra went to The Arts Academy at Benjamin Rush before finishing up high school, learning her trade as a vocalist and graduating as one of the only children of colour in her class. Her mother recognised her talent early on, giving her composition books as a child to fuel her fire, and helped her realise her dream further with a move out of her home city.

“Philly is one of the most talented places in the world, honestly it’s some magic there. It’s magic, there’s something in the water. I’m reppin’ Philly all day, it’s written all over me.”

Atlanta beckoned, and with a high-school graduation on the near horizon, Tierra laid low. She had become a local celebrity back home, but the ATL called for tunnel vision as her dream of a career in the music industry was coming to fruition. Working at a car wash while alongside school allowed Tierra to purchase a Mac, and when she moved back to Philly a couple years later, her vault on that laptop was filled to the seams.

Not many artists have the pen that Tierra has, nor the vision to be as creatively diverse. On her three EPs released in December, Rap?, Pop?, and R&B? shows her ability comes naturally and across an array of sounds. But, that’s the Philly in her, and it’s about time that the city of Cheese Steaks and the 76ers is appreciated for it’s forward thinking creative talent. Tierra can do it all at an elite level; with the capacity for singing, rapping, writing, engineering and producing, first learning her trade in the latter as she moved back home. Engineering was a vital skill, as she likes to have her hands in all aspects of the music. The product flowed, and in 2017 she signed a deal with Interscope. People from all diasporas started to catch on, with Missy Elliot comparisons arising.

“I’ve always been a creative across the board. Whatever we’re doing in the studio, I’m down to get my hands dirty, I’m down to press some buttons, I’m down to direct, it’s a collaboration, a team effort.”

Her debut album Whack World was released in 2018 and is an extremely impressive introduction and a showcase to her artistry. The 15-track project was entirely solo, but Tierra is never solo. Family is central for her, especially at this stage of her blossoming career as she tours Australia, while also filling in as the opener for Tyler, The Creator. From her mother being a central pillar in her musical journey, the Whack family name is being carried throughout the world as Tierra proudly wears it on her back.

“My last name is Whack, that’s my family name. So, just representing. Just never forgetting where you came from and just trying to push forward and keep going. It’s always the reminder of your roots and your core because it’s so easy to loose yourself with so much going on in the world.”

Tierra Whack is bold, and if you’re not on her wavelength you won’t get it. In a world where attention spans are short and content has never been in higher demand, Tierra Whack is at the forefront. We see songs being made solely for TikTok like ‘Doja’ by Central Cee, or Drake‘s ‘Toosie Slide’ at the height of the pandemic. Whack was one of the first to pioneer this. Each song on her debut album back in 2018 only has a 60 second run time, apart from the intro which falls 2 seconds short. Alongside this, she’s a pioneer for woman of colour within the music industry. She’s unapologetically herself, something that reflects in her music and her style.

Watch the entire backstage interview below, where Tierra touches on her lust for Philly Cheesesteaks, her experience in Australia and her advice for young, upcoming artists.