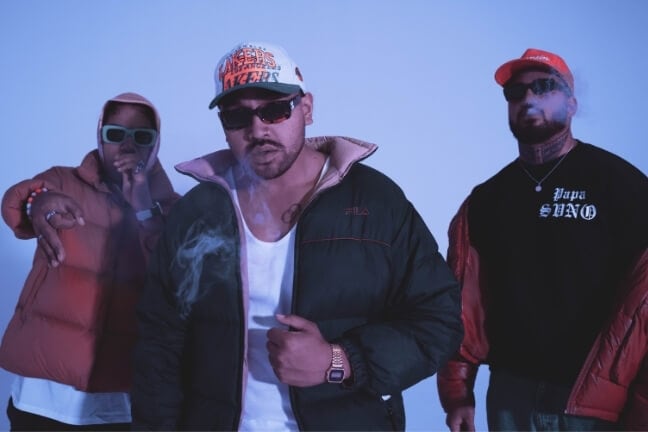 Australia’s music scene is no stranger to rap groups, but no-one is carving their lane quite like Planet Vegeta. Despite the Dragon Ball Z reference in their name, the Planet Vegeta roster of SVNO, LKGD and Jazz NOBODI proudly represent Western Sydney. The group was formed when SVNO and LKGD began to take their music seriously and Jazz sent videos of himself rapping from the mines. Now, several years on, the trio has delivered their debut EP ‘Letters to Chi-Chi’; a dynamically creative and alluring blend of electric soul, R&B and hip-hop.

‘Letters to Chi-Chi‘ is a culmination of years spent crafting their unique sound and following up their break out year as a collective and solo artists in 2020. Though the group dropped a couple of tracks from their Sunday School series as well as their single ‘Mai Elle’, last year saw Planet Vegeta turn a heavier focus to their individual talents. LKGD released his spacey R&B record ‘Star 69’ with Sammy Johnson while Jazz NOBODI channelled his TDE influence on ‘Tall Poppy’. SVNO also made waves with the soulful street tales of ‘Make That Call’ and ‘Like We Do’, the latter of which enlisted the help of ONEFOUR member J Emz.

Recorded almost three years ago, Planet Vegeta have created a distinctive sound through ‘Letters to Chi-Chi‘, a debut that SVNO believes takes heavy influence from their love for anime and music.

“If you’ve seen DBZ (Dragon Ball Z), you know Chi-Chi and Goku have a little thing and we created this project in 2018, so it’s kinda like our first stages of evolving as a group and I feel like now we’ve come a long way. I think the way it came together was organic because we all come from different styles and background. LKGD is heavily influenced by Pharrell, I’m kind of gospel and R&B, and Jazz is more into the rap shit. It all came together pretty easy and was all made in one of our little bedrooms.”

‘Letters to Chi-Chi‘ features the previously released ‘Jorja’, ‘Mai Elle’ and ‘You’, while adding four new tracks which round out the animated and bouncy debut. The project begins with ‘Like Dat’, a funk-infused intro with LKGD handling production and Jazz delivering a splash of wordplay. The intro is followed by ‘Sailor Moon’, one of the project’s standout moments that takes inspiration from the manga series of the same name. With co-production from LKGD’s brother VAIMOSO, ‘Sailor Moon’ is a charming and jazzy hip-hop / R&B cut that showcases exactly what’s to love about Planet Vegeta. With their own distinct talents and effortless chemistry, there’s no putting PV in a box.

“That’s what sets us apart. Obviously, it’s not the sound that everyone fucks with because of the way Aussie Hip-hop is but I think it’s good for us to know we stand on our own two. If we fuck with the track, it doesn’t matter if it’s Gangsta or Garage or EDM, it’s us,” commented SVNO.

Originally released as their first official single, ‘Jorja’ is a slick and self-assured bop named in tribute to the UK singer Jorja Smith. Despite dropping in 2019, ‘Jorja’ is still as fresh as it was on first listen, with lyrical content highlighting the importance of comfortability in your character. The heavily teased and fan favourite ‘COVID92’ is one of SVNO’s favourite tracks off the project and sees him experiment with his vocal range across a more stripped-down instrumental.

“It was real out of the blue and it was literally made over Zoom. I made the song and then I showed the boys on Zoom and we did that. We recorded the video over Zoom too,” SVNO recalls.

The UK garage influenced ‘Mai Elle’ is a ray of sunshine, with LKGD’s production shining brightest. SVNO told AUD’$ that the recording process usually takes around half an hour – with LKGD creating the production vibe, and while Jazz will begin writing, SVNO typically tends to freestyle. Originally released as part of their Sunday School series, ‘Charlie B’ is another refreshing display of their dynamic sound with their music video shot at Oxford Art Factory.

As Planet Vegeta close out their project with their latest single ‘You’, the trio cement their spot in the scene to a larger audience. While it’s no secret that the tenacity and authenticity of Western Sydney artists have been taking over as of late, Planet Vegeta’s debut project bookmarks this moment in history. ‘Letters To Chi-Chi’ is a versatile and special debut from Planet Vegeta as they familiarise an array of new sounds to hip-hop in Australia. For PV, their debut EP is just the beginning, with the rest of 2021 turning focus to live performances and the second season of ‘Fried Chicken & Flips’ said to be dropping very soon.

“All of us got fire solo shit too but we’re going to put that on the backseat and focus on PV shit. We’re still in our evolving stages, we’re in a hyperbolic chamber and we’re ready to roll. We’ve got our next project ready so it’s pretty exciting, to be honest.”

‘Letters To Chi-Chi’ is a burst of colourful hip-hop, silky R&B and satisfying hints of funk, soul, UK garage and electronica. Through their brother-like chemistry, each member’s unique talent are showcased in a cohesive and exhilarating form. At the foundation of Planet Vegeta is LKGD’s vibrant production and vocal work that takes responsibility for the multi-faceted sound of the group. SVNO’s melodies and catchy hooks have been boasted about for years, but ‘Letters To Chi-Chi’ finds him expand his artillery and trial new cadences. Finally, Jazz NOBODI’s lyrical prowess offers an essential dynamic to the group that has established himself as a formidable emcee.