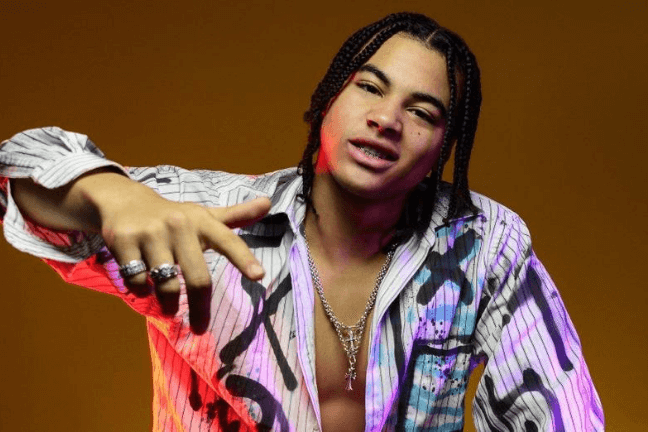 One of the fastest emerging acts out of the West Coast right now is a dude known as 24kGoldn.  A nineteen year old USC dropout from San Francisco with a background in financial studies, he’s currently sitting a just over 12 million listeners a month off the back of his debut project “Dropped Outta College” – from which the lead single “Valentino” just went platinum.

We caught up with 24K a few weeks into isolation to chat about his lightning fast come up, his influences and what we can expect into the future.

24KGOLDN: “Hahaha it’s kind of like a national holiday hey? Are you guys celebrating it over there?”

A: “Yeah, well it’s the 21st over here now but we definitely were celebrating all day yesterday as you can imagine. How’s your day been ? What’ve you been up to?”

24k: “Well I don’t know how well my mom would like if I said I was smoking weed so I definitely wasn’t doing that…”

A: “Haha absolutely not. Hypothetically though, if you were smoking weed today how would you have enjoyed the day? What would you have been listening to during the day?”

A: “Ahh HUGE! Might have to edit that out or a little giveaway for any listeners on our call haha!”

A: “As you know, our platform AUD’$, we’re all about cash. All about money. And yourself 24KGOLDN, a former finance student, what’s your advice to a 19 year old rapper in Australia or America who is currently struggling through their studies and thinking of dropping out to pursue their dreams?”

24k: “Well I think an important thing to consider is that you can’t drop outta college unless you go there in the first place. I completely understand that school is not for everybody, but it’s a tool that you can use for whatever you want. For me, school wasn’t so much about learning anything, it was about being in a community of people who could support my music. Music always does well in a community you know? So you gotta do as much as you can outside of music to sustain yourself and still dedicate your time and effort towards music. And then when that cheque is there, then you can make that transition.”

A: “Yeah, it’s such a balance for so many young artists like yourself and others. Juggling school, music, and at the start that little bit of bread that you’re getting. How was that challenge for you and how did you have the persistence to get to where you are now? What kept you going?”

24k: “I mean it was crazy bro, to go from doing essays and chilling with your friends to having to do music videos and interviews and all this stuff. While still recording. Like, I was juggling a million things but time management is so important. You just gotta lock in and figure out; Damn, I gotta do this at this time, this at this time, sleep at this time. And if you can stick to it, it makes your life so much easier.”

A: “Mmm, now coming out the other side; when you talk to people in general, if you say ‘I’m a finance major’ people are going to respect that instantly. But I guess if you walk down the street and tell someone you’re a rapper; you’re gonna get that dumb rapper stereotype. Despite the fact that you’re educated and getting money. Have you found that transitioning? Do you get that stereotype? And how do you cope with that and show off who you truly are?”

24k: “That’s so funny, cos just a couple weeks ago, before all the quarantine. I was getting some food, and this lady she’s like to me and my friends ‘Oh you’re college students? Where do you go to?’ And all my friends said USC while I just said I dropped outta college. Well she just stared and gave me this look. And it was so funny cos I knew what I had going on but nobody else did. I like to try be a walking example of ‘Don’t Judge A Book By It’s Cover’. You know, that lady she might hear this interview or see me on TV one day and it’ll change her whole perspective.”

A: “That’s a really cool way of looking at it man. Have you gone full circle and gone back and played college parties since you dropped out?”

24k: “Yeah, yeah, I love pulling up to USC tailgates every once in a while. Everyone’s there just tryina’ have fun. A lot of this LA stuff is very people tryina’ pose and posture. And not to say you can’t have fun doing other stuff but at college everyone’s main purpose is pretty much just to have fun.”

A: “Yeah I can imagine that. Do you find that’s your base? Like do you find the college kids are really rockin with you? It seems like people have really embraced you, your message, the project. The success is sort of speaking for itself. How does that feel?”

24k: “I feel really blessed you know.  It’s crazy to go to a show and have everyone singing your lyrics, compared to just numbers on a phone. To me, making music, that personal connection with people and the fact that you can change people’s lives that you don’t even know. I’m just really thankful that people are hearing my message the way I want it to be heard.”

A: “Mmm, and that message. I guess there’s so many themes throughout your debut project; you’re talking about dropping out, you’re talking about pursuing your own dreams. But then you’re not afraid to have fun on records like ‘Gram’. What is that message? Where is that balance you’re trying to find between personal, intimate storytelling and having a bit of fun. Where’s your balance between turning up and chilling out?

24k: “That’s a great question man. Wow, I love that question. That’s probably the best question I’ve been asked ever!”

A: “Haha thank you man, appreciate that!”

24k: “Haha, ah I mean for me; you can’t take life too seriously. Like there are serious moments in life and you have to deal with those accordingly. But life it about having fun. If you’re not having fun, what the point of doing this shit at all? I wanna give people a little bit of everything. I want them to have music for any situation, any scenario, any mood they’re feeling. I want them to know they can put on a song of mine and feel through that.”

A: “Yeah, I like that on a thematic level. But even sonically man, you’ve got so many different sounds going. I mean, it’s a 10 track debut project but you’re going everywhere from singing to more trap sort of stuff. Is that just you experimenting at this stage or is it that you have got that much of a range of what you’re into and what you’re producing?”

24k: “Growing up, I been exposed to such a different range of music. From growing up listening to a lot more rap, to making friends with people who like pop music, or rock music. It’s given me so many references and influences, I’m kinda tryina just make a genre of my own. People are multi-dimensional right? So why can’t the music from a person be multi-dimensional as well?”

A: “Yeah I like that. And you can hear those influences. I mean from the autotuney T-Pain, Kanye  – I imagine being 19 that they were a huge influence for you growing up. But then I can also hear more of the trap sounds that have emerged in the last five years too. What are those influences for you?”

24k: “Yeah definitely. Like rap, and more like funk and soul stuff growing up. Hip-hop and trap through high-school. And then coming up in LA and being in college listening to pop and rock a lot more. But literally everything in life inspires me. I was going through and making an inspiration album on my phone. And I found this random photo of this like government logo I took  in class in high school. And I was like damn, I showed my friend Chris. And he said that goes to show you pay so much attention to the little details in life. Like inspiration is everywhere, you just have to be looking for it.”

A: “For real. But it’s a tough time right now, with quarantine and COVID. Everyone’s going through it. Where’s your inspiration right now? What are you looking to in the world? And what the message you’re trying to tell in this next chapter?”

24k: “Yeah, everything’s so crazy. I’m not really going out and gaining new experiences. But I haven’t had the opportunity to lock in and make music in such a long time. I was on tour with YBN Cordae for two months right before all this Coronavirus stuff happened. I only had like two weeks before it hit. One week I was sorting my life, and the next I was in the studio. And that’s where I started this El Dorado project, which is my album that I’m working on right now. So I have all those experiences from tour to talk about, and all these life lessons that I been holding on to, excited just waiting to talk about.”

A: “That’s cool. It’s so often you hear someone’s debut project and it’s all talking about what they wanna do or they’re gonna do. And then second project it’s like, yo i’ve experienced this now. Do you experience that growth and evolution in yourself as you’re writing this new project?”

24k: “Yeah I feel like, I’m a lot more personal with this project. One thing that I realised when I started getting into this music industry thing; I’m growing as a person at the same time I’m growing as an artist. So I’m basically able to tell my life story musically and the world can learn from it. And I can learn from it! I just think I’m in a unique position to share more about myself and let other people learn about themselves through that.”

A: “Absolutely. And I think it’s interesting. For a debut project, you carried it largely on your own bro, and congrats for that. Often debut projects are heavy feature loaded and though you had Fetty Wap, and then Lil Tjay on a remix at the end. Can we expect more feature work and collaboration from you in future? Or is working on your own  more your style? What’s your direction for the new project?”

24k: “Um, right now it doesn’t have any features on it. Actually that’s no true. It’s got Kaash Paige, because we’re probably gonna put ‘Unbelievable’ on it. And I’ve got Quavo on a feature, we’re just waiting to shoot a video for. But, all the other songs don’t really have features on them. We’ll see though. We’ll see! There’s so many talented artists I’m a fan of and would love to work with, just so far I been doing it myself. I don’t know if it’ll keep like that or if I’ll sort some stuff out. We’ll see.”

A: “Absolutely. And on a last note man. It’s probably gonna be a minute before we’re touring again and getting on planes. But what do you know about Australia and would you like to come out here when this madness is over? And what would you expect?”

A: “Well we look forward to having you out here when this is all over man, and even sooner hopefully listening to a new project before then.”

A: “You take care and enjoy the rest of your 420 and non-smoking my man haha.”

Words & Interview by Matthew Craig. Follow him on IG @capo_rmf