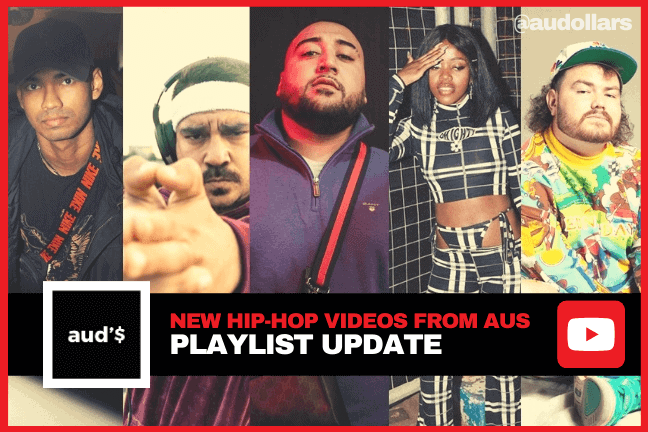 The clips keep coming!!! Another MASSIVE week of drops across the AU. We’ve rounded up some of the best VIDEOS that have been released lately in our Youtube playlist  – ALL worth you checking out. Be sure to follow us here????

After dropping his EP Come Alive late last year, Melbourne’s Lakshane drops his first offering of 2020. Reload is a change of pace from the Sri Lankan born talent, sliding more into a hip-hop lane but still with his buttery smooth vocal cadences. Crisp edit too.

Kimberly star Dallas Woods has been dropping consistent gems for several years, and now he’s moved on to gold. The funny police academy inspired clip from Melbourne filmmaker Zac Harris compliments the bouncy rap tune nicely. Catch the clip now as we feel you about to hear it endlessly on radio.

The latest signing to SONY imprint Forever Ever, CG Fez comes through with presence on Take 1 indicating he’s here to stay. Posted on the block with his crew, the Western Sydney emcee moves between gritty bars and clever wordplay. Peep game.

Is there anything she can’t do??!? Tkay Maidza announces her signing to 4AD alongside a cinematic desert clip complete with tight choreography. Good luck not vibing to this one. With shouts to Lil Kim and Missy Elliot, her star has risen dramatically each year and pretty soon she could be sitting amongst that company.

Sydney lads Triple One have crafted a winning formula and show no sign of slowing down. Gentle melodic hooks and rapid fire verses; this one will be another favourite for their robust fanbase, however the animated visual may set it apart. Check out all the niche scene references and run it back if you can’t catch them all.

SAINT LANE – WHEN DID WE GROW UP? (FT. ROBBIE MILLER)

With a spot on Billboard to help launch this one, SAINT LANE is attracting new eyes and ears across the globe, however they’re meeting him in a very vulnerable spot. With elements of folk mixed in with rap, this gentle earworm sees Lane pouring his heart out describing the worst year of his life. A track to get you in your feels.