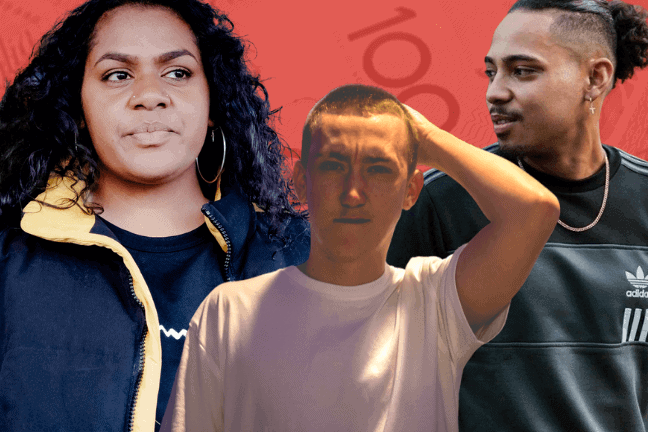 Running up to Week 19 of our New Hip-Hop Videos From Aus wrap, collating the latest and best clips to drop from the AU. Don’t miss a video! Subscribe to be first updated with all the latest visuals from across the country. Which clip you feeling this week? Slide in our comments with your fav!

Youngn Lipz shares ‘Spaceship’, the first taste of his forthcoming debut project, ‘Area Baby.’ Over an acoustic guitar-driven beat, the Western Sydney artist celebrates his early success and remains optimistic for his blossoming career. As Youngn Lipz offers his unique cadence and talented vocals, Moonboy Entertainment provides fittingly astronomical visuals. After a flurry of features and standalone tracks across the past two years, YL’s first release of 2021 is a promising teaser for his first body of work.

Two years on since the first installment, Skrub contemplates his mortality in the second part of ‘Love Me At My Funeral’. With Rivercity handling the visuals, the Brissy rapper emphasizes his lyrics with a slower cadence and a stronger sense of storytelling. Though it might be a big call to make, as Skrub dives into detail about his struggles, ‘Love Me At My Funeral’ holds reminiscent elements of Slim Shady-era Eminem. The Golden Era signee continues to push past the underrated title as he expands his discography with a demanding call for recognition.

In what might just be the biggest AU remix of the year, Shely210 enlists Lisi, Jaecy, and Nokz78 for the ‘Taking The Piss’ remix. Directed by Jack Nielson, the black and white music video connects the Sydney-repping Shely and Jaecy with Brisbane’s very own Lisi and Nokz78. The Latin influence directs the instrumental as each artist delivers their warning shots, with the QLD boys priding themselves on their bars and the NSW rappers having no issue with smooth flows and catchy hooks.

In her most personal and vulnerable moment yet, Anangu / Torres Straight Islander woman Miiesha pulls on heartstrings via the visual for ‘Damaged.’ Always delivering hauntingly beautiful R&B, Miiesha narrates the tale of heartbreak caused by a fractured relationship with her mother. Produced by Entropico, the cinematic visual gives a poignant insight into her life and community juxtaposing fresh green fields with harsh, graffitied underpasses.

MANU CROOKS – WHERE YOU GONNA RUN
(Directed by Daniel Merson)

Manu Crooks corners the competition in his latest film, ‘Where You Gonna Run’. Directed by Daniel Merson, the music video features a grainy, black and white shot prologue before colour arrives and Crooks does his thing. ‘Where You Gonna Run’ possesses a grittier feel than usual and finds the Sydney artist delivering his signature style over the ominous, rumbling 808s as hype contines to build for his ‘Mood Forever’ sequel.

Nerve and JK-47 once again prove their untouchable chemistry on ‘One In A Million’. Hot off his new ‘Tall Poppy Season’ EP, Nerve’s uplifting new single is co-produced with Gratis Minds’ Jay Orient. Directed by the No1 Network team, ‘One In A Million’ features Nerve and JK trading bars with visuals of graffiti artists, dirt bike riders, and skateboarders. Looking past the energetic punchlines and motivational themes, the duo provides a social and political commentary that is guaranteed to share festival stages.

After a two year hiatus, Seth Sentry returns with ‘Castlevania’, the first official single from pending album ‘Super Cool Tree House.’ Always animated, and even after six years since his last album, Sentry’s punchlines know no limit as he spits about everything from day jobs and video games, to bodying upcoming rappers. With the music video directed by Sentry’s brother Samuel Marton, ‘Castlevania’ shows no interest in a hook, instead allowing bar after bar to fill up the run time. Seth Sentry’s third studio album is set for release on June 18.