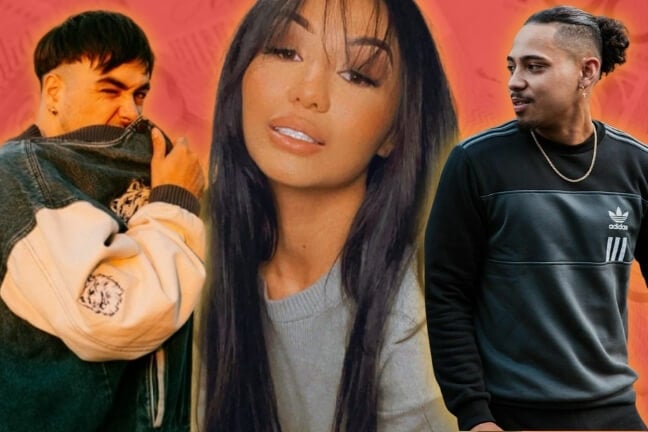 Almost at half-time of 2021, brings us to Week 25 of our New Hip-Hop Videos From Aus wrap. Always bringing you the latest and best clips to drop from the AU. Don’t miss one ever! Subscribe to be first updated with all the latest visuals from across the country. Which visual are you vibing this week? Jump in the comments with your fav!

Somber Hills and Phi11a offer a moment of melodic warmth in ‘Autumn’. The Sydney artist’s latest joint strays slightly away from his usual punk rock sound and leans into more alternative pop and emo-rap. With nostalgic melodies and the alternative rap production by Sadie, Somber Hills’ sound emits a similarly ear-catching appeal to Aries’ album, ‘Welcome Home’ (2019). The pair have been performing the track on Phi11a’s RIOT tour and their chemistry bleeds through both the live performance and the studio recording. Somber Hills and Phi11a have made the most of 2021 so far, and it doesn’t look like their momentum is slowing down.

RØNIN – ALL GIRLS ARE THE SAME
(Directed by Zac Harris)

RØNIN delivers the long-awaited visuals to his hit record, ‘All Girls Are The Same’. With its hypnotic melodies, crawling instrumental and vulnerable lyricism, the Brisbane artist has accumulated over 86M Spotify streams with his viral 2020 single. Over a year since its initial release, the Zac Harris-directed music video finds RØNIN ditching the mask in the fiery visual companion to the sombre rap record. With the arrival of the official music video, RØNIN reminds us of his unique and experimental style and readies listeners for what’s in store next for the enigmatic artist.

Asia Mila continues to level up with her second release of the year, ‘Cut You Off’. The glow up is real, with Asia’s tropical trap pop banger building upon her previous release, ‘Lies’. Directed by Aaron Bull, the motorsport-inspired music video finds Asia flexing her sonic and personal evolution, with steadier harmonies, empowering lyricism and the same self-assured attitude we’ve come to love from the female artist. Since her 2020 releases, Asia Mila has matured her sound and found a potent ability to effortlessly mix her bars with tasteful melodies, rising to an untapped potential.

Hoodie4L’s ‘FN’ blends stories from Melbourne’s west with New York’s current melodic trap movement. No time for trust issues or backstabbers, the young 4L star makes his 2021 debut with his hungriest and most consistent sound to date. Following a similar running Polo G-styled piano, Hoodie4L fills a gap in the melodic trap scene. Unlike the R&B-infused rap melodies, the Melbourne artist presents a richly trap-designed autotuned street story, similar to the likes of Lil Tjay. Hoodie4L’s debut interview along with how whole 4L crew will be available on AUD’$ YouTube soon.

Youngn Lipz’s new single ‘Broken Home’ is the Western Sydney artist’s most vulnerable effort to date. Directed by Moonboy Studios, the music video carries the track’s themes of living through the trials and tribulations of family troubles. From his own journey, Youngn Lipz is able to provide a poignant sense of perspective and relatability, strongly resonating with those from his own area and many others. ‘Broken Home’ is the second single from Lipz’ debut album, ‘Area Baby’, set to arrive next month. With his latest release in mind, ‘Area Baby’ promises a unique and thoughtful Western Sydney story.

Bootleg Rascal’s latest joint, ‘All About You’, is a sun-kissed blend of neo-soul and hip-hop. With the track’s driving electric guitar, warm harmonies and a touch of piano keys, the East Coast-based duo have delivered self-care in a song. With themes of love in the modern era of technology, ‘All About You’ is the first track entirely produced by the duo, and features a playful Saint Lane verse on restless infatuation. Bootleg Rascal are steady working on their forthcoming project due for release later this year, and if this is anything to go off, you’ll want to stay tuned.