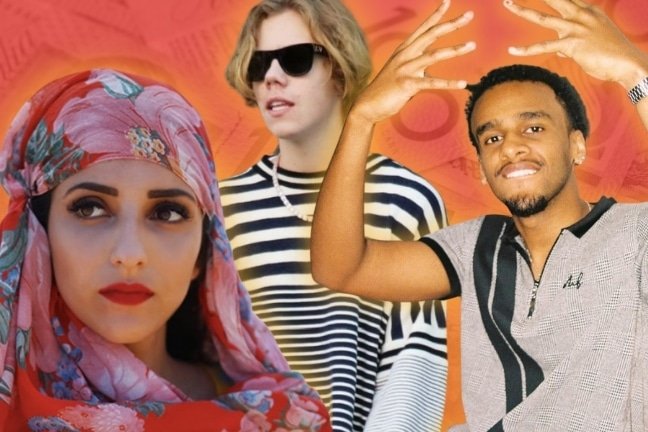 Presnting Week 29 of our New Hip-Hop Videos From Aus wrap-up, curating the latest and best clips to drop from the AU. Don’t miss a video! Subscribe to be first updated with all the latest visuals from across the country. Which clip you into this week? Jump in our comments section with your favourites!

CHAII’s second release of the year, ‘Might Just’ is a powerful NZ link-up with KINGS and Eleven7four. The genre bending artist CHAII, combines elements of punk, electropop and hip-hop in her infectiously catchy new single and accompanying music video, directed by Connor Pritchard. ‘Might Just’ soundtracks rebellious partying with a carefree attitude. Platinum recording artist KINGS fires a fast-paced verse stacked with wordplay and a variety of flows – Need him and Jazz NOBODI on a track! And though it’s an obvious comparison, the Eleven7four duo brings a vibrant touch to ‘Might Just’, distinctly similar to the Atlanta style of OutKast and EARTHGANG. ‘Might Just’ presents three incredible recommendations of NZ Hip-hop acts.

After a decade since the first Rapper Tag, the trend creator 360 returns with ‘Rapper Tag #1 – Season 2’. The original RT featured some of the biggest Hip-hop names in the country, and with a new generation of emcees dominating the scene, the Falling & Flying artist has decided it’s time for round two. In ‘Rapper Tag #1 – Season 2’, 360 reflects on the Australian scene and drops an onslaught of wordplay across three self-produced instrumentals because like he said – “I want rap to be a sport again, I’m bored of it.” Officially restarting RT and unofficially passing the torch, 360 tags arguably the most-anticipated emcee for S2, Brisbane’s Nerve.

Swish Music members Deemance’ and TMB The Driver ride with Ajok.Ma on their new single, ‘NASCAR’. The Ipswich collective are following their break-through year up with another collection of trap bangers. Produced by JiJbeats, the three artists glide across thoughtful piano keys, trap hi-hats triplets and punchy 808s with their richly autotuned vocals. Deemenace’ handles the chorus as he croons about resilience and self-worth while Ajok.Ma offers her perspective through modern R&B melodies. In the Lawson Cross-directed music video, edits scramble across screen for TMB The Driver’s verse on relationship woes. Swish Music staying strong for their CEO. Free Dau Dau.

STNDRD set the vibes right with their smooth and infatuated new single, ‘Let’s Roll’. With its Kumehani-directed music video, the South Auckland trio deliver love-struck lyrics as they ride bikes through the city and perform their track. As their third release of the year, ‘Let’s Roll’ sets the bar higher yet again with its uplifting jazz-infused raps and Jordan’s soulful R&B chorus vocals. With their debut album under way, the Western Sydney based group are continuing to focus on themes of Polynesian culture and values with every anthem they release. ‘Let’s Roll’ is the soundtrack of driving around with your partner on a sunny day, windows down and volume up.

The Kid LAROI stands tall among some of Hip-hop hottest names in his ‘Not Sober’ music, featuring Polo G and Stunna Gambino. Produced by 8th Diamond, Khaled Rohaim and Haan, the track offers the Sydney superstar sombre piano and trap percussion for him to reflect on coping with trials and tribulations by rolling and pouring up. Fresh off the third instalment of F*CK LOVE, LAROI handles the melodic direction of ‘Not Sober’, while Polo delivers another fire feature verse and Stunna’s vocal style glides across the final moments of the track. F*CK LOVE 3: Over You includes seven new tracks with features including Justin Bieber, Lil Durk and more.

Raf Receipt’s sophomore single ‘MY LUV’ is a 90s-styled R&B throwback, with that Western Sydney flavour. Produced by Sefru, the track’s glistening guitar sample and Raf Receipt’s silky and melodic vocals mirror the music video’s feel-good energy. Earlier this year, Raf released his debut track ‘NICE TRY’, an Afrobeats and hip-hop/trap offering featuring fellow Area resident, Jaecy. While Western Sydney is exploding with new artists, Raf proves he can hold his own a track like ‘MY LUV’ and hints to the Area’s emerging Afrobeats scene.