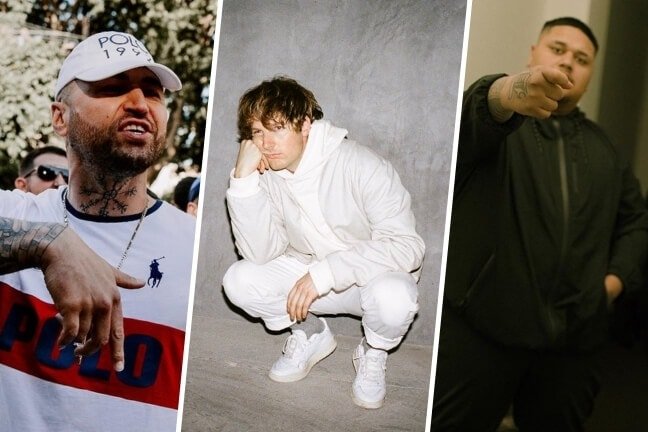 The Aus scene is BOOMING lately with fire visuals dropping on the daily. Our New Hip-Hop Videos From Aus playlist on Youtube is the place to stay locked to ensure you’re updated with the latest. Weekly we highlight 5 of our favs to drop. Which one you got on repeat? Let us know on socials and make sure you’re subscribed to our channel on Youtube to be first to know! ?

After storming onto the scene last month with the quick-fire ‘Chat’, Queensland emcee Nokz delivers a total change of pace showcasing his versatility as an artist. Slowing things down, reflecting on his past and showcasing his impressive vocal abilities, ‘24′ is a statement that Nokz is a lot more than just another drill rapper.

Aus favourite Dylan Joel has shyed away from the bright lights in recent times, instead turning his attention to the intricacies of his art form. ‘Fall Too Easily’ is a testament to that work-rate; a vulnerable insight to a heartbroken talent as Dyl swerves into a Pink Sweat$ lane both vocally and via his wardrobe. That falsetto is something else.

Sydney’s Spanian aka HOOD RAMBO has been a staple of the local scene for a minute now, and on ‘Illchay’ he’s highlighting his deep ties in the area. An iconic exhibition of NSW underground culture and an essential lesson in pig latin. Crisp cinematography and a notable Anthony Mundine appearance completes a product which might be his best yet.

After dropping his debut solo track ‘Like We Do’ last month, Planet Vegeta’s SVNO backs it up with the romantic ‘Make That Call’, another demonstration of why he’s one of the fastest rising talents in the country. With a vocal cadence that will give any listener chills, he’s on a run and shows no signs of slowing down.

West Sydney’s Pistol Pete & Enzo have been steady releasing and upping their production levels ever since signing to Biordi Group earlier this year and brand new drop ‘Doin Der’ has arrived with a cinematic visual. A Top Boy like aesthetic, intricate exploration of the local area and a few label cameos makes this clip a stand out from the duo and one to run back.