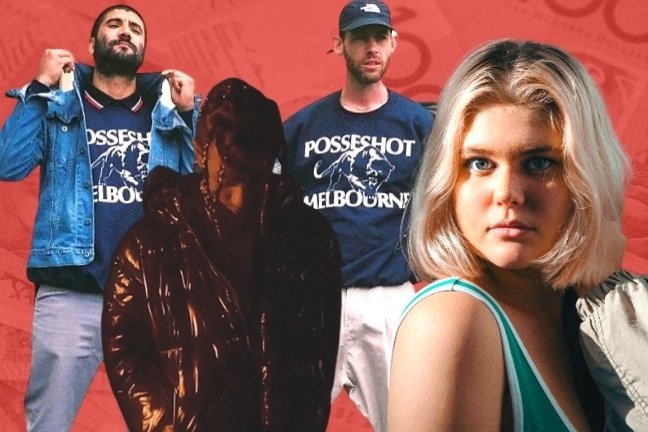 Bringing you some of our Week 14 favourites from our New Hip-Hop Videos From Aus playlist on Youtube. Be sure to subscribe to keep up to date with all the latest clips from the AU. Slide in the comments and let us know which clips you’re feeling this week!

Melbourne rap duo Posseshot tells us loudly, ‘It Iz What It Iz’ in their latest music video. Their uncompromising new single marks their first release of the year with Mr Muscles and Kharni both coming out firing. With a clip-art styled music video, ‘It Iz What It Iz’ features relentless percussion to match their delivery and an instrumental fitting for a ring walkout. The Melbourne emcees remain faithful to the sonics of the old school, from Mr Muscles’ lyricism to the nostalgic underground production of Kharni.

Sahxl, one of Sydney’s youngest stars, makes a booming return with his new track, ‘Demons’. Produced by Australia’s finest Khaled Rohaim, his latest is a hard-hitting track about transforming your demons into strengths to be able to conquer adversity. With smooth autotune and a coarse delivery, this marks Sahxl’s second official release. Following up his ‘The Kid Freestyle’ from 2020, ‘Demons’ takes a more Drill and Trap approach with an accompanying music video directed by NavsRevenge and ByMello. At 18 years old, Sahxl continues to earn his stripes as one of the hottest upcoming artists.

BBG Smokey refuses to miss, enlisting the help of Munzi for his new track, ‘New Benjamin’. Hailing from Melbourne’s Collingwood, the African-Australian artist has built a strong fanbase through his lyrical honesty and melodic and nuanced delivery. The music video to ‘New Benjamin’ is directed by Zac Harris, and reflects on the hardships of Smokey’s upbringing in Burn City. Alongside a roster including Lil Jaye, Eco$ystem, BBG Smokey is a strong presence on 66 Records, the first African owned music label in Australia. Smokey’s signature contemporary sound exudes virality, and it’s only a matter of when, not if.

Brisbane via Canada, Jamie Rose and Malikai Motion have been pairing up for a while now but their sound continues to develop with each release. The newly released music video reveals a stripped back version of ‘Too Close’ from their latest EP, ‘Big Mood‘. Rose’s vocals are on full display as she smoothly switches flows and transforms her Weeknd-styled R&B cut into a late-night ballad. Produced by Malikai Motion, this rendition finds him delivering a ringing electric guitar solo at the track’s climax. ‘Too Close’ showcases the duo’s artistic growth and based on their past work rate, the two should be gearing up for a powerful 2021.

Melbourne emcee Jye Simpson delivers his latest SLoth producer work; ‘Juicy’ featuring thundering bass drums and dancing pianos track matched by the emcee’s fast-paced lyricism. Though the rapper oozes personality in the track alone, the clip by Blacklisted Visions brings his character on full display. Jye Simpson dropped ‘Still Here’ and ‘Whole New Level’ in 2020, showcasing his vivid storytelling and strong flow but in 2021, it looks like the Melbourne rapper is coming with a whole lot more sauce.

SPADE CLIQUE – ONE TOO MANY
(Kreezy Visions)

After their freshman year in 2020, Spade Clique come through with a weekend heater, ‘One Too Many’. Meeting during their schooling life in Campbelltown, Spade Clique is a Western Sydney rap group consisting of members Jazza, MG and Jnr. Directed by Kreezy Visions, ‘One Too Many’ is a UK Garage influenced cut that’ll hype you up for any night out. The group released five tracks throughout 2020 but it already looks like Spade Clique have elevated their art for 2021. It’s no lie that the UK scene is prominent in Australia, but it’s rare to see its influence depicted like this. 100% here for it.