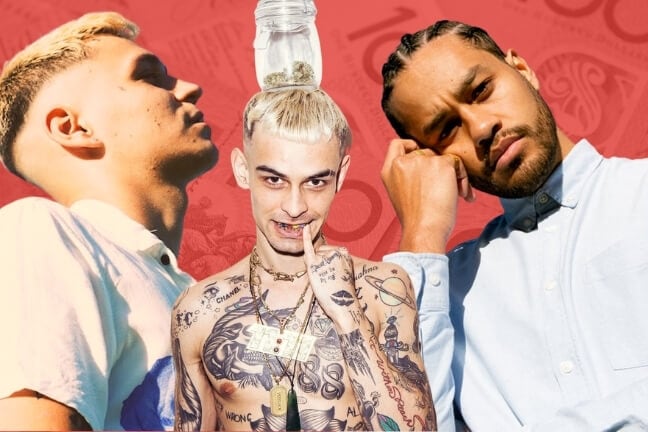 We’ve landed on Week 22 of our New Hip-Hop Videos From Aus compilation, running up the latest and best clips to drop from the AU recently. Don’t miss a visual! Subscribe to be first in the loop with all the latest videos from across the country. Which one you feeling this week? Jump in our comments with your fav!

Phi11a is ready to ‘Riot’ ahead of his debut headline tour. Though his punk rock influence has always been closely linked to his appeal, Phi11a eagerly embraces this on ‘Riot’ with emo-trap melodies and the single’s crunchy guitar instrumental. Directed by FunFilms, Phi11a performs the single at band practice, gearing up for his nationwide tour in support of the single. In under two years, Phi11a garnered enough attention to become Australia’s first Def Jam signee and continues to sharpen his style with every release. Phi11a’s Riot tour will roll though the east coast, commencing on June 11 at Sydney’s Alcatraz.

3K wrestle with another heater in their second single of the year, ‘Smackdown’. Throughout their discography, 3K have carefully crafted a near-sinister sound contrasted by their light-hearted and unique style. ‘Smackdown’ moves this forward with Eissa’s baritone delivery on the hook, Beluga’s confidently tongue in cheek bars and the rumbling production of Gazs. Paired with a music video from Visionaire Media, it’s become guaranteed that 3K’s visuals and skits will be as equally entertaining as the music. If last year was where the group truly found their stride, 2021 begins to culminate this into something much bigger.

Alongside the release of his debut project, Olive Amun delivers visuals to the EP’s summery lead single, ‘Blues’. The break-up anthem, led by its casually strummed guitar and slick melodies, reveals the Melbourne musician’s alternative pop potential and charm similar to that of Dominic Fike. While the ‘Don’t Leave Yet’ EP seems to be leading Olive Amun slightly outside of his hip-hop origins, the project and its lead single maintains the personableness and wistfulness of alternative hip-hop. It goes without saying that Olive Amun commands and deserves both attention in and outside of the confines of hip-hop.

Following his viral hit ‘Astronaut In The Ocean’, Masked Wolf releases his new single ‘Gravity Glidin’. Instead of attempting to replicate the success of his previous drop, ‘Gravity Glidin’ takes a different approach – escaping a plane crash in the high-production music video, Masked Wolf places a heavier emphasis on his emceeing skills, spitting on his recent rise to fame. Produced by long time collaborator Tyron Hapi, the instrumental matches the overwhelming delivery with constant trap rolls and heavily distorted, Yeezus-like 808s.

One of the most powerful voices in the country, Ziggy Ramo combines with Australian icon Paul Kelly for a modern-day update to the anthemic 90’s cut ‘Little Things’. Co-Directed by Ramo himself in collaboration with the Sydney Opera House, the piece is both artistic and informative, challenging commonly held narratives about the land’s history and giving a thorough insight as to its’ Indigenous origins. A poignant moment.

Powerhouse Melbourne emcee Clariyah Bo$$ continues on her run of remixes, putting her flavour on the Drake and Rick Ross smash ‘Lemon Pepper Freestyle’. After a run of freestyles which has seen her tackle everything from Trap and Drill to R&B reflections, Riyah heads back to the studio on this one, confidently adding to beliefs that she has one of the sharpest pens in the country. Clever wordplay, introspective lyricism, and a natural charisma on the mic make this another string in her impressive bow.