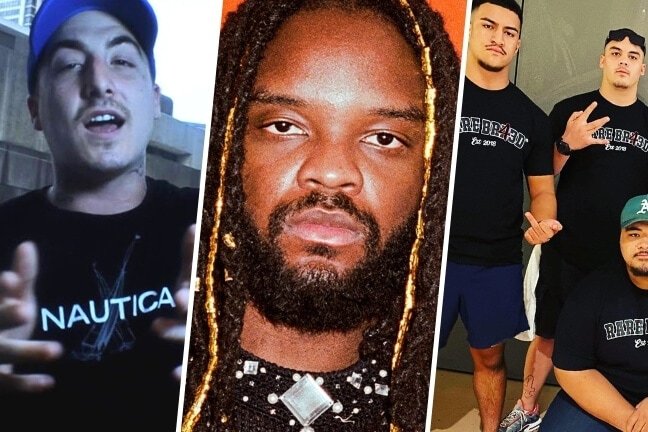 New Hip-Hop Videos From Aus is our playlist on Youtube, your one-stop-shop for all the best music videos from the culture. Updated daily, here’s our latest half dozen favs from across the AU (&NZ!). Dive into our comments and let us know which clips you’re feeling, or which ones we missed out on!

Shadow releases his ‘Flirty’ music video just in time for Valentine’s Day, but the track is no love letter. Instead, it’s another flex of Shadow’s ability to switch from Drill to Trap as he pleases. With the music video shot and edited by Leif Logie, Shadow continues to experiment with different flows and cadences over beats they might not typically fit, but the Perth rapper just makes it work.

TH4 W3ST throws it back with their 90s styled R&B and party Hip-hop track ‘Ride With Us’. As always, Ruff Pops takes care of the visuals filled with TH4 W3ST crew, plenty of ladies and a whole lot of red cups. On the chorus, Ezra James invites us to join the ride as the whole 43 area continue to dominate the scene. Lisi, JR, Snoopy and Vikz all deliver their verses over the synth and clap snare heavy instrumental produced by Wreckah.

Sydney’s Double L only takes W’s in his new music video, ‘Lucky’. On an Espa mixed Drill beat, we’d expect to hear a more energetic and aggressive delivery but instead Double L decides to prioritise his pen game. Switching flows throughout the track, L discusses his intentions and ongoing journey within the scene – a status which is elevating rapidly.

Quickly jumping across the Tasman to New Zealand where Blaze The Emperor and Raiza Biza have teamed up for their new hit ‘H Town’. With the beat’s flute driving the Trap instrumental, Blaze and Biza have effortlessly produced a lowkey banger – not their first collab, but this feels like their biggest track to date. With grainy camcorder type visuals from Tom Grot, the ‘H Town’ single runs for just two minutes and gives listeners their first look into Blaze’s next album.

Nter and Skem team up for their intergenerational gutter rap collaboration, ‘Chapters’. With a melancholic vocal-instrumental, Nter reflects on his role as a father and a son, and his upbringing around drugs and violence while Skem touches on his successes within the scene while still learning to cope with the memory of darker times. No need for a hook – ‘Chapters’ is a raw and thought-provoking commentary that also marks an important moment in Skem’s career. Nter has embraced his role as an OG figure, passing down the touch to Rops1, Isaac Puerile and now, Skem.

Straight from the country’s capital, Genesis Owusu dissects his life in fame on ‘Gold Chains’. While ‘Gold Chains’ is sonically a fun, soulful funk-rap piece, Owusu is constantly touching on an underlying, metaphorical darker undertone. Directed by Riley Blakeway, the clip conveys a sense of hollowness in the pursuit of music industry success. Gold chains no longer celebrate his success, but weigh Genesis Owusu down like shackles instead. This clip is the latest peep to the long-awaited debut album ‘Smiling With No Teeth’, set for release on March 5th.