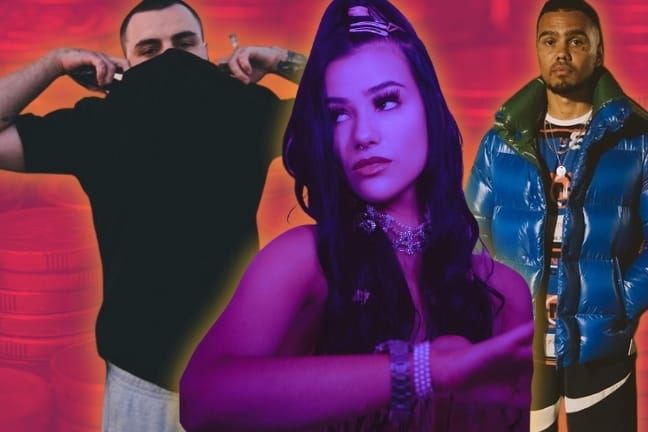 We’re at week 42 of our New Hip-Hop Videos From Aus wrap-up; always showcasing the latest and best videos from across the AU. Don’t sleep! Subscribe to our channel to be first with all the hottest new clips out Which ones you digging this week? Spam the comments with who we should be featuring…

Kobie Dee arrives harder than ever on 2021 sophomore single, ‘Doobs’, as his debut EP Gratitude Over Pity quickly approaches. The Gomeroi/Sydney-based artist has undoubtedly become one of the scene’s strongest through poignant tracks like ‘Jody’, ‘Role Models’ and ‘About A Girl’ released earlier this year. ‘Doobs’, titled after a Bundjalung word for women, is produced by Jaytee Hazard with mastering credits from Melbourne’s Plutonic Lab, who provide Kobie with the rumbling bass and dancing piano keys we hear him exudes a new level of confidence and artistic flair on. Also paired with a high-energy music video by Jordan Hill, the Bad Apples signee is captured in some fast-paced edits and cinematic shots.

Featuring on JK-47’s Made For This album and rising to the occasion for ‘Rapper Tag S2 #4’ in August, Nate G shares his debut single ‘Creature’ alongside fellow ECB member Will. The two Tweed Heads brothers breathe fire over the floating strings, airy synths and trap drums of Mattymadeit’s production. FEVER Media shared the Joe Elliot-directed music video for ‘Creature’ featuring spinning visuals of B&W to vibrant yellow and red shots of the two emcees. While the four brothers of ECB (Chiggz, Nate G, JK-47, Will) entered the scene as an exciting, bar-heavy and boom-bap-centric collective, the family continue to develop their artistry.

Melbourne artist R.em.edy contrasts the last single ‘613’ with her latest collaboration titled ‘Hurry Up’, produced by Sydney-based Minimal Miggy. The alt-R&B & neo-soul artist delivers a sweet and sultry performance, reclaiming her confidence and empowerment after the heartbreak in her previous release. Meeting Miggy while supporting Bootleg Rascal during their 2020 Victorian shows, she provides the track’s watery keys, thumping bassline and trickling hi-hats. Directed and edited by Rachael Vowles, the ‘Hurry Up’ visualiser adds to the suggestive and seductive feeling the song oozes. Though she might fit somewhere between Doja Cat and Jorja Smith, R.em.edy stands firmly in a lane of her own backdropped by the unique Melbourne sound surrounding her.

After pairing up for collabs with Smak and And Beyond earlier this year, Newcastle’s Talakai drops his first solo release of the year, ‘Still’. Produced by DillyGotItBumpin, whose credits include Rick Ross and Russ, the track is a soulful ode to his home – “No matter where I go, I’ll always take Newcastle with me still.” Complimented with a music video by Harrisons Visuals, Tala raps about his successes and sets his sights on what he’s still yet to achieve but is well on his way. ‘Still’ follows in sonically similar footsteps to ‘Never Change’ where Tala’s wordplay and cadences spread smoothly like butter over the laidback soul-sampled cut.

Dropping the Gucci in his name, south-east Melbourne based artist $eb shares his second release of the year, ‘Me And You’. Teaming up with frequent visual collaborator Nick Rae, the latest offering from the young alternative pop-rap artist sees him singing of a broken love story as he dissects him and his partner’s differences. Mixed and mastered by Melbourne’s Kiid Spyro, $eb trades the electric guitar chords of his previous release ‘Skeletons’ for a more acoustic and dark melodic soundscape. Though he’s been establishing himself with his raw and unique vocals, ‘Me And You’ also allows him to showcase his songwriting in multiple pockets across the instrumental.

Australia’s Grime godfather Fraksha gives the whole scene a warning with his first solo track of the year, ‘Interlude 2’. The Melbourne-based UK-export has built a loyal following since his debut in 2010 through solo ventures and posse cuts with Smash Brothers and Nine High. Produced by GangSign, ‘Interlude 2’ sequels his 2020 single with a crawling piano and menacing bassline for the AU OG to deliver some overdue commentary on the glamorized depiction of street life and copycat emcees rapping – “Them same guys struggle paying rent for their yard, they could have paid that with what they spent on a scarf. Or is that freedom selling bags of the shard and spend it all on Gucci, you fella’s ain’t smart.”