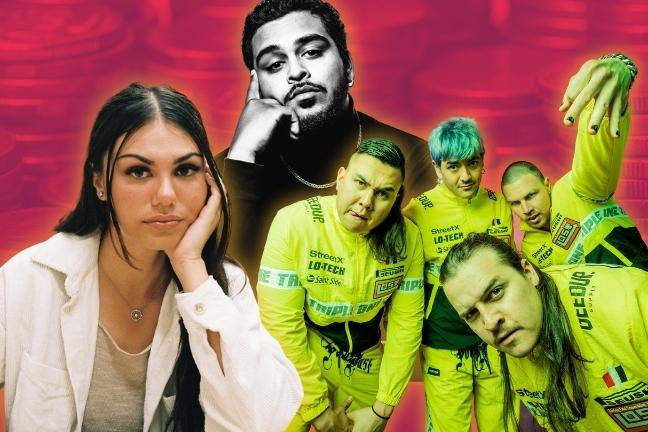 Week 46 of New Hip-Hop Videos From Aus has arrived; as always, bringing you the latest and best videos from across the AU. Don’t miss out! Subscribe to our channel to be the first to be across the hottest new clips dropping. Which video are you feeling this week? Slam the comments with who we should be featuring…

A year and 35 tracks later, The Kid Laroi brings the curtain down on his F*CK LOVE era with visuals for ‘Still Chose You’ featuring Mustard. What the Sydney superstar refers to as his breakout year, is what could also be considered as one of the greatest 12+ months for any Australian artist. Accompanied by visuals directed by Arrad, ‘Still Chose You’ is a piano-focused pop-trap love song with LA producer Mustard. Now at the end of an era, Laroi has announced he’ll be momentarily stepping away from the spotlight to complete his highly anticipated debut album.

Sydney powerhouse Billymaree adds the finishing touches to her 2021 with vulnerable new single ‘Sensitive’. Released via Biordi Music / Virgin Music Australia, the 21-year-old offers her dreamy melodies packed with heartfelt lyrics over the BeatsWithSheph and Lowkee produced track. Already catching the eyes of Diddy and TDE labelhead Punch, the R&B talent has gone strength from strength across her previous two releases ‘Down’ and ‘On Top’, as well as her feature on Hooligan Hef‘s Living in Sin. Paired with a B&W music video by Jade D’Amico, ‘Sensitive’ is just further conviction that Australia’s R&B is in safe hands.

Jordan Dennis teams up with frequent producer JUJO and WA rapper Dallas Woods for his first lead single of the year, ‘Egyptian Lover’. The Melbourne rapper has been one of the most consistent artists of late, following his incredible HDMI2 project with tracks like ‘Hokus Pocus’ and ‘Elon Must’ last year. Produced by JUJO, the ringing bass of ‘Egyptian Lover’ drives the infectious tune as the two lyricists ride the rhythm with silky falsettos and smooth flows. Flying jet planes through Egypt for the 76m Films music video, ‘Egyptian Lover’ is hinted to be the first single from a collection of collaborations between the three.

TRIPLE ONE – COME OVER
(Directed by Martin Guilfoyle)

Sydney supergroup Triple One return with their sophomore single of the year, ‘Come Over, co-written with Matt Mason of DMA’S. Following ‘Blood Rave’, their atmospheric collaboration with Melbourne’s Lucianblomkamp, ‘Come Over’ sees Obi and Marty rapping about their inner turmoil before Lil Dijon belts out another stadium-sized hook. With Billy Gunns melding the nostalgic guitar riffs of Mason and Triple One’s trap drums and 808s, the 4-piece band continue to strive for an alternative genre-bending sound. The music is also directed by Marty who “wanted it to feel like some hotshot director that knew nothing about Triple One came in and said ‘This is how we make a pop/rap music video.'”

In their first release of the year, Western Sydney group Doublesix share the sweet new single ‘Candyshop’. Producer i.amsolo brings the island vibes with the guitar riffs and bouncy drums opening the stage for the three “trap Willy Wonkas.” With the catchy candy-related chorus dividing each of their distinct verses, ‘Candyshop’ is filled with treats. The music video directed by Aaron Bull opens with a golden ticket title card before the Rooty Hill boys rap in front of Microsoft backgrounds and candy-covered backdrops. Though their 2021 debut has been a long-time coming, ‘Candyshop’ makes it all worth the wait.

Steez Malase and Kei Leeza craft the perfect pre-game anthem with ‘Everything On IC’. Produced by Levine Lale, the relentless trap instrumental offers looming synths and crisp drums for the two Brisbane-based artists to tear up with their vicious deliveries and infectious flows. Directed by Jacob Pedersen and Joshua Ratahi, the Moonboy Studios music video sees the Starter ambassadors coach their team to victory, with the triumphant and braggadocious energy of the single ringing in the background. Both Steez and Kei have dropped a handful of releases this year including their earliest 2021 collaboration entitled ‘Starter Track One’ featuring Nerve.