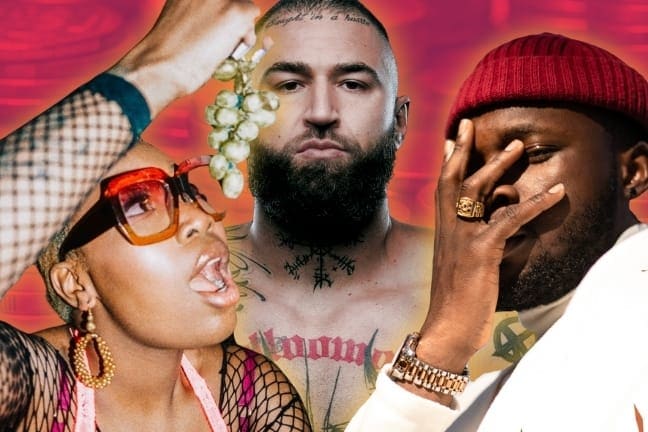 Now up to Week 37 of our New Hip-Hop Videos From Aus wrap, always delivering you the latest and best visuals from across the AU. Catch every video to drop. Subscribe to be first with all the latest clips from down under. Which are you into this week? Get active in the comments with your favourites!

SPANIAN – THE RUCKUS
(The Last Addition)

Spanian declares the end of an era with his new warcry ‘The Ruckus’, directed by The Last Addition. The Sydney artist has become an inescapable force in 2021, from the equally menacing releases of ‘Melvin Manheof’ and ‘HOOD OUS’ to his Hood Logic video series and the recent announcement of his upcoming memoir, Spanian: The Unfiltered Hood Life. Although the track delivers some of Spanian’s best verses, he took to Instagram last week to express his dislike for the song. Projected in a new sonic and thematic direction, ‘The Ruckus’ is the final page of this chapter but it’s far from the end of the book.

Mulalo leaves everyone in the dust on her latest unapologetic track, ‘M31 (Racing Down the Hume)’. Following her bossed-up 2020 debut ‘Checks’, this Nerve-produced sophomore single was the first song to be recorded in the new No.One Network Studio in Brisbane. Shot at her home during Melbourne’s lockdown, ‘M31’ shows the brash and charismatic talent embodying bad bitch energy across the rumbling 808s. There’s an infectious self-confidence that Mulalo exudes in every release and as one of the most exciting emerging spitters in the country, don’t miss the latest.

Vinsins presents the first part of ‘Never Rich Richy’, a poignant story from his adolescence. Dedicated to his past self and many like him feeling outcasted and unloved, the music video follows young Rich Richy as lyrics overlay the B&W visuals from Finmedia.mbb. Over the ominous keys of So Special Beats production, Vinsins raps about a suicidal and misguided teenager shot and arrested after a failed robbery. Few can pack their bars with as many multis and intricate wordplay as Vinsins, but even fewer can match the calibre of his compelling storytelling. You heard it from the man himself, part two coming soon.

Indigomerkaba and Insideus drop the first single to their upcoming mixtape with ’47 Ronin’ featuring Stellar Mental. Directed by Deeza, the Adelaide trio cruise through Blackwood delivering your daily dose of bars over the eery boom-bap beat. Titled after the legendary leaderless samurai, each emcee brings their warrior spirit on the track with every punchline slicing like the sharpest katana. There’s no one in the scene working harder than Indigo but ’47 Ronin’ is far from a one-man show, it’s Adelaide excellence. As Indigo’s fourth project of the year, he and Insideus’ collaborative tape Bushido will be released October 1st.

JK-47 returns with ‘Healing’, his first solo single since his debut album last year. Produced by frequent collaborator Jay Orient, the track is a strong contrast to his last release with Nerve on ‘One In A Million’ earlier this year. The mellow and motivating performance sees JK reflect on his past mistakes, his career and his young family that feature in the FEVER Media-directed music video. Accompanied by the choral hook and the dizzying and warped keys of Orient, make no mistake the Tweed Heads’ is well and truly made for this.

The Melbourne-based Afrobeats and R&B artist Joanny drops new visuals for ‘Watch You’ from his People, Times & Emotions EP. Directed by Eddies Ilution for R.A.K Productions, the fifth track from the EP delivers a short burst of shimmery and soothing feel-good music. Known for his silky Afro-influenced autotuned vocals, the Nigerian-born artist croons his lyrics of dizzying attraction. There’s been an influx of emerging Afrobeats artists this year but Joanny has been pioneering the sound in Australia since 2018. Building upon his debut project Heaven Planned, ‘Watch You’ and the rest of his sophomore EP adds an extra layer of songwriting depth and authenticity to his catalogue.