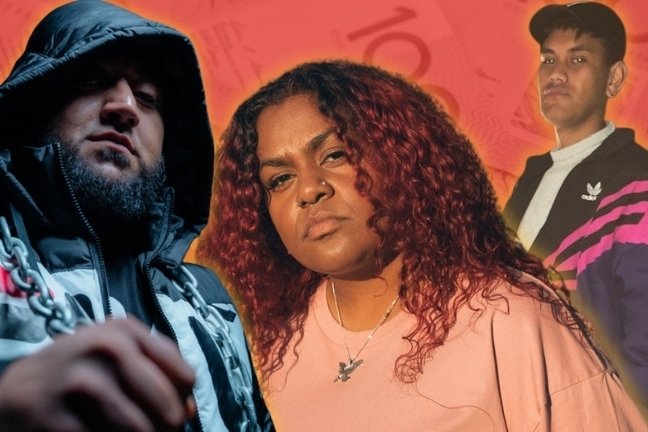 We’ve laned on Week 28 of our New Hip-Hop Videos From Aus wrap. As always bring you the latest and best clips to drop from the AU. Don’t miss out! Ever! Subscribe to be first updated with all the latest drops from across the country. Which visual are you feeling this week? Jump in our DMs and in our comments with your fav!

Western Sydney’s CG Fez offers a more melodic approach in his 2021 debut, ‘On Sight’. The Forever Ever signee burst onto the scene last year with a handful of tracks depicting his life in the Area through poignantly introspective storytelling, crafty wordplay and an arsenal of infectious flows. Across its bouncy guitar plucks and bass-heavy trap instrumental, ‘On Sight’ is no outlier to this formula. In the Sonder Films music video, Fez touches on similar themes as ‘4:30’ and ‘Take 1 & 2’ while building on the melodic efforts demonstrated on his previous single, ‘Like When?’. Despite a late start to the year, CG Fez definitely makes up for his absence with ‘On Sight’.

Underground favourites Indigomerkaba and Wombat come armed to the teeth on their latest cut, ‘BAZOOKA’. From Adelaide down to Tasmania, two of the country’s most dangerous emcees deliver a fiery onslaught of bars over the Insideus-produced instrumental. Shot by Sam Winderlich, the music video shows the pair performing their eery and villainous new track on stage and in the studio. A collaboration between Indigomerkaba and Wombat has been in demand for quite some time, and ‘BAZOOKA’ is well worth the wait. Like a pistol to a bazooka, it’s just not a fair fight trying to outrap Indigomerkaba or Wombat.

MIIESHA – MADE FOR SILENCE
(Entripico)

Miiesha adds a new splash of colour to her catalogue in her latest track, ‘Made For Silence’. With the upbeat electro beat and her harmonious alt-pop vocals, Miiesha takes a stylistic leap from the soulful R&B we were introduced to through her debut album, Nyaaringu. What remains the same though, is her commanding vocal presence and strong storytelling of Indigenous experience. The Joey Hunter-directed music video follows Miiesha as she drives around aimlessly, picking up snacks and jamming out on the road. Produced by 6lack collaborator Lucianblomkamp, the track builds upon the thematic experience of her previous single ‘Damaged’ as she deals with the loss of her grandmother.

YOUNG MOSE$ – BE MINE
(Visions Productions)

New kid on the block Young Mose$ steps out with his debut music video and announces a bold arrival. Tantalising melodies, romantic lyricism and a gentle air of swagger make ‘BE MINE’ a certainty to get spun at any afterparty. With ambient lighting utilised by director Visions Productions perfectly suiting the charismatic vibe, and the vocal hook getting instantly stuck in your head, the creative collective from Melbourne’s northside are staking strong claims to be up next. Watch Young Mose$ closely in the next 12 months.

Two AU heavyweights combine for another polished addition to their respective catalogues. Esteemed Sydney producer I.AmSolo links with Aus scene pioneer Blessed on ‘Cold’, a spacey, futuristic, late-night jam. Wobbly synths, croony vocals, and a floating feature verse from the artist fka Miracle make this one an instant vibe. With lighting and visuals from Sonder Films looking like they’re straight out of a Netflix original, this is one of the tightest packages to drop so far in 2021 and deserves mainstream attention.

Tasmania’s Greeley delivers the third instalment to his ‘GDAY’ series, and it’s his best one yet. Produced by LARIKEN, Greeley takes aim at the Australian government and media across the hard-hitting drums and menacing guitar-led instrumental. Opening with the track with lyrics from ‘GDAY 1’, the music video rightfully places an emphasis on his lyrics with bold captions overlaying the B&W one-take of Greeley. Running over four minutes long, Greeley tackles an exhaustive amount of issues including corrupt politicians, bias media, and the past and current systemic racism faced by First Nations people. With the release of ‘GDAY 3’, Greeley also announces his new album, YEAH THE GREELZ, is coming soon.