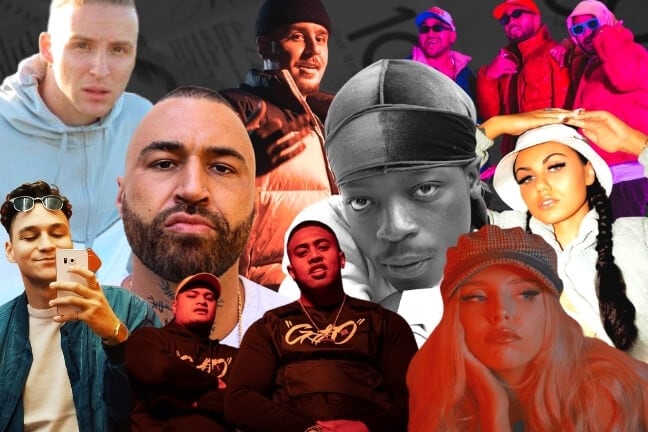 Somehow it feels like this year has taken a decade, yet also flashed by in a blink. Either way, we’re now at the halfway mark of 2021 and wanted to take a second to reflect on another mammoth six months for the culture down under. Here’s a few personal reflections and artists you should check in on if you missed so far. As always, you can catch them all in AU CASH RADIO.

THE SONG THAT’S STILL ON REPEAT:

BABY PRINCE – OVER SEX
The nostalgic early 2000’s R&B vibes, the gorgeous auto-tuned cadences, the Michael Jackson references. Baby Prince has all the makings of a star and this record will still sound great in years to come. It gets better every listen. I don’t think I’ve played an Aus track this much since Youngn Lipz broke out with ‘Misunderstood.’

THE RELEASE WHICH MADE A STATEMENT:

ONEFOUR – STREET GUIDE PART 01
Though they undeniably ran 2020 with the massive rollout of their debut project ‘Against All Odds’, questions surrounded Onefour as they drifted sonically from drill into a more R&B and commercially viable lane. Their response? Build a studio, step up the raps, and remind everyone how they got a name in the first place. A warning shot to any other Australian Drill acts that Onefour are still the top tier, and are still getting better.

THE MOST IMPRESSIVE LIVE MOMENT:

CHILLINIT – THE OCTAGON TOUR
After rescheduling dates due to the COVID-19 pandemic, and then having to upgrade venue sizes, there was a lot of anticipation about Chillinit returning to the stage. And it lived up to every expectation. Less of a tour and more of a festival circuit, joined by the likes of Lisi, Wombat, Bliss N Eso & Talakai on stage, tens of thousands of the 420 family showed out and partied with one of the best live performers Aus Hip-Hop has ever seen.

THE ARTISTS WHO OWNED SOCIAL MEDIA:

SPANIAN
Hood Oos is now a part of every day Australian vernacular and Spanian is a household name. Watching the ascension of Spanian has been equally as entertaining as it has been educational; his ability to tell stories from his lived experience and then translate that into art, followers, merchandise and ultimately money should be a blueprint for aspiring independent acts. Despite the fanfare and intentional theatrics, his final Hood Logic gives a vulnerable and honest insight into the tightrope Spanian walks daily. Make time to watch it.

LARISSA LAMBERT
We already knew Larissa Lambert had an incredible voice last year, but know the whole world knows. Her bedroom cover of SWV’s weak blew up instantly on Youtube, finding a massive audience in Asia and catapulting her into the spotlight. Her label cleverly and quickly got permission to licence it, release it, and it’s now been streamed well over 50 million times online. Big, Big W.

THE MUST LISTEN BODIES OF WORK:

BRANDON STONE – NORTHSIDE LULLABY
We spoke about Brandon Stone and his debut album as one of our most looked forward to in 2021 and safe to say he didn’t disappoint. An introspective journey of a young man battling a journey of romance, heartbreak, and ego. He walks a fine line between late-night melodic vibes and bar-heavy raps, yet still raw and early in his career in a Drake on ‘Thank Me Later’ kind of way.

PLANET VEGETA – LETTERS TO CHI-CHI
Check out our full review of this project here for a deep dive, but in short. Nobody is doing it like Planet Vegeta right now. Super catchy melodies, clever writtens, and just all-round good vibes. Pardon the pun, but they are out of this world.

OLIVE AMUN
AUD’$ has been championing Olive Amun since the beginning and watching his ascension in 2021 has been a joy. After releasing weekly in 2020, the Melbourne talent signed to Canadian tastemakers Dreams Never Die and is now endorsed by publications and outlets worldwide. He’s gone from a few thousand streams to breaking into the million mark and is just getting warmed up.

THE ARTISTS ABOUT TO BLOW:

BILLYMAREE
Many first caught onto Billymaree via her feature on Hooligan Hefs’ project ‘Living In Sin’, yet in the 12 or so months since she has carved out a reputation for her solo work that extends well beyond our borders. First signing to Biordi Music and recently being unveiled as part of TDE-affiliated collective ‘A Room Full Of Mirrors’, with an exceptional pen and haunting vocal range – Billymaree is about to take over.

SAHXL
Another name we’ve been shouting for years is young Sydney talent Sahxl. Richly talented vocally and with air of mystery, he’s now surrounded by industry heavyweights and has been anointed by The Kid LAROI as the one to watch. He’s only a few consistent drops away from stardom.

LYRICISM
From 2016 to 2018, Atlanta Trap sounds dominated AU releases and helped launch the global, culturally diverse generation. In the years since, UK and more recently NY drill have been the powerhouse sounds running hip-hop, permeating every level of the local scene. Things always come full circle, and while not yet the dominant sub-genre, it’s safe to say that bars are back. From gutter rap to the battle scene, to the influence of grime, OG Australian hip-hop was built on lyricism, and though ChillinIt and Huskii have been leading this charge for a minute, acts like JK-47, Posseshot, Nokz78, Barkaa, Indigomerkaba, Rops1 and Nerve are coming through ready to carry the torch into the future.