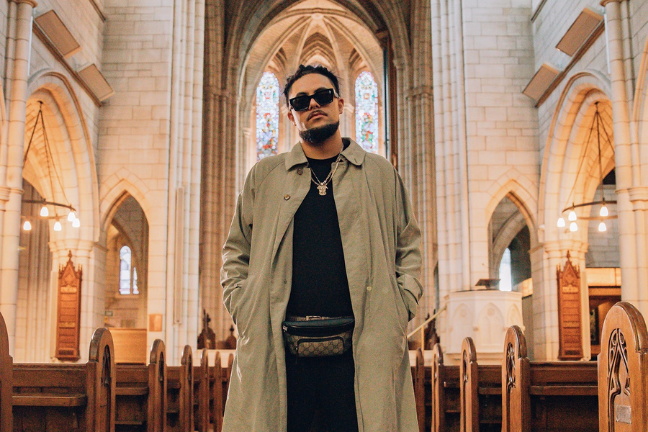 Melodownz is a pillar in the New Zealand hip-hop scene. And has been for the best part of a decade. From featuring in XXL Magazine to sharing the stages with the likes of T-PAIN, YG, and Joey Badass, and a 2019 collaboration with Denzel Curry, Melodownz has consistently been a figure breaking down global barriers, connecting New Zealand to the world.

“I don’t know if it’s the population, I dunno if because we’re a small island we’re not getting the recognition that a lot of these artists deserve. I dunno if it’s the tall poppy syndrome out here. I dunno what it is but there’s so much shit popping off here.”

A proud man of Samoan and Maori heritage, Melo was raised in Avondale, a suburb in West Auckland, famously inked on his skin. A town he has been showcasing since his debut project ‘Beginners Luck’ in late 2014.

An artist with a rapid work-rate, Melodownz output was consistent from the moment he arrived, dropping 3 more solo projects and several singles before gaining international attention. In 2017, he performed in London and Berlin as well as packing the country’s hottest festivals at home in NZ.

“I don’t think a lot of Australian people know me. I’m not really a drill artist, so I’m not in that space but I’ve been like, doing this rap shit for a minute. So for me to see a lot of my people just pop off and do their thing, OneFour popping off, HP Boyz, Lisi, doing their thing, it’s a win for all of us in terms of Indigenous and Polynesian culture.”

2019 was a standout year for the aspiring emcee who racked up several award nominations in recognition and snared the title of ‘Most Promising Artist’ at the Pacific Music Awards. This saw Meldownz as the first act signed to the Kiwi arm of legendary hip-hop label Def Jam and lead to the mammoth collaboration ‘No Mercy’ with Florida rapper Denzel Curry.

Throughout the pandemic years since he’s been working on an album, recently releasing the hard-hitting lead single entitled ‘Pray For More’ with help from Lisi and Mikey Dam. Struggling in his late teens, getting into trouble, and losing loved ones, the single reflects on that turbulent time in his life. Melo originally recorded the track in the first wave of lockdown in New Zealand. It’s hard-hitting, uplifting, and comes with a strong message of hope and prosperity despite the aforementioned hardships facing many Polynesian communities.

“Just off the top of my head there’s a guy called deadforest, he’s popping. He’s solid, his bars are tight. He would suit a lot of shit that’s popping off in Aus at the moment. There’s Church & AP, they’re some young dudes. I actually used to mentor those guys. They used to come to the community centre. They’re dope man. If I could compare them to any artist in terms of diversity, I’d say they’re like the Samoan/Tongan Outkast in a way.”

The upcoming album promises to be a diverse compilation of music he’s been working on throughout this time, citing it as a “catalogue of influences over the last 3 years of my life”. Melo has always jumped between bar-heavy hip hop and melodic rap and loves experimenting with his vocal cadence. These approaches don’t always make the final record, but for his creative process; it’s necessary.

“I dunno if it’s a bad thing, but I quite like being versatile. I get stagnant real easy. I’ll get bored of a certain sound and then I wanna try something else. I’m always experimenting with different sounds and my voice.”

Displaying his array of creative talents, in 2020, Melo ventured into the digital space, launching his Youtube series ‘Kava Talk’, where he interviews New Zealand/Australia media personalities in a traditional Polynesian setting. Guests have included Benee, Joseph Parker, and most recently, Lisi.

Melodownz‘s forthcoming album is set to continue his legacy of breaking down barriers for New Zealand hip-hop. A young OG, he’s a multifaceted artist and personality who will proudly carry his culture and integrity wherever the journey takes him. Check out our interview with Melodownz and Matthew Craig below, and let us know what you thought of ‘Pray For More’ in the comments. Be sure to check out our segment of AUD$ Rapid Fire below where Melo talks about his dream collaboration, first celebrity crush, and dream interviewee.