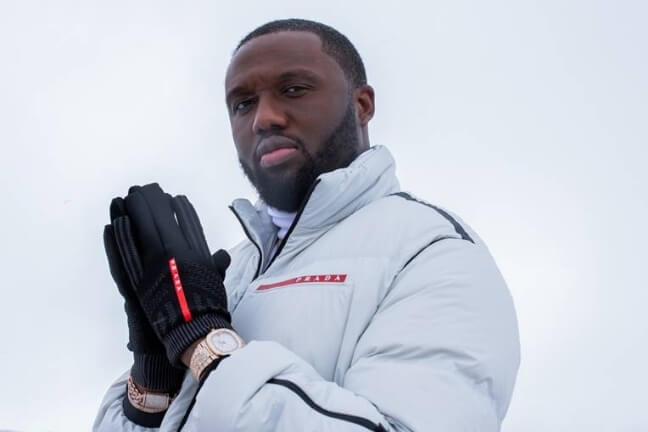 One of the godfathers of UK drill culture, anointed by many as the best drill emcee on the planet – Headie One is a force to be reckoned with. With a catalogue spanning an incredible eight mixtapes, and a resume which includes Gold certification by both the BPI and in Australia by ARIA, the 26 year old talent from Tottenham in North London is fast establishing a legacy far beyond the humble council estates in which he began.

He recently achieved his first number one album in ‘Edna’, an intriguing body of work which spans from the depths of UK grime and drill to the brighter tones of R&B and afro-beats. We caught up with the original roadman following the release of the deluxe version of ‘Edna’, where we spoke on his rise to fame, collaborating with the biggest star on the planet, and his plans to head down under.

AUD’$ / Matthew Craig: My name is Matthew, good to meet you bro. How are you today?

Headie One: I’m great thankyou! How are you?

I’m very well fam. Good to talk to you today! Man, Edna. Congratulations! How does it feel to have a number one album bro?

It feels good. It feels better than loads of other stuff to be honest. Feels like a step forward. And yeh man, it’s amazing.

It’s been such a big journey for you. Even just to go back two years, when you dropped ‘1800’ with Dave which at the time was the highest charting drill song ever. Fast forward two years and you’ve now got a number one album. What do you learn along this rapid journey?

I just learned that things move so fast. Things change fast. And yeah, man, I just got to be true to yourself and who you are. And don’t let everything else move and take your eyes off what your goal is.

What was that goal? I guess when you were spitting in the early days in OFB, Did you imagine you’d be here one day?

Nah. I used to dream. I’ll be here one day. We’ll never used to think it would be a reality. But we’re here now.

How do you how do you stop and enjoy the moment?

I’m still trying to figure out how to do that now you know? I feel like… obviously right now on lockdown. I felt right now I’m having a moment to just kind of see things for what they are. But usually things always moving and I’m so busy… I don’t really. It’s kind of like just my mind moves on to the next thing so quick.

I want to talk about the project for a minute, obviously named after your mum, can you talk a little bit about the importance of your mother in your life? And I guess just the role of family for you, musically.

Yeah, I feel like it’s a very important influence to everything in general, especially in my music, because I like to speak about real life situations. And also like to tell a story, and to open other people’s eyes to different kinds of scenarios that happened. I thought that because I felt that my situations can be so unique. I feel like I have more of a story to tell.

Sonically on the album, sometimes you’re further from drill than anyone can imagine; sliding into R&B. Was that intentional to show your music evolution, and what was that process like?

Because I listen to so many different kinds of music that I actually enjoy. Day to day I listen to Drill music. But, it’s not like…I wouldn’t say it’s my favourite kind of music to listen to at this moment in time. So I just wanted to kind of just feel myself in a full circle – just everything that’s happening in my mind.

What are some of those sounds that you listen to?

I listen to loads of American Trap music. Obviously, Drill music. I listen to R&B, soul music. Yeah, really a bit of everything literally.

Drill is culturally now a phenomenon that’s taking over the whole planet. However, it’s still continually getting this negative media portrayal. But that really misses s the story of opportunity that this this culture and genre has given to people through music and to young people to find another way out. How was music been that influencing your life?

To find a way out? I feel it’s been a big influence really. I think it has been like the only influence. Yeah, that’s the only thing that we really have really… that’s really made sense. All the situations that we we’ve been in… the negative or positive ones… we just rap about it. And that’s our way of telling the story and expressing ourselves. And if that’s helped us to get out of those situations, it’s almost like the the perfect outcome.

How do you deal with the those negative perceptions that can sometimes be caused by media? How do you stay strong to your integrity and identity and push through?

In the beginning, it used to have a lot more of a negative effect. It was a lot more frustrating. But now I just really see as I just really ignore and just see as ignorance. I’ve also come to terms, that obviously, not everyone’s going to understand everything. And people also fear what they don’t understand. If you’re not coming from these places, and you don’t actually understand what’s going on, it’s easy to paint it with a negative brush, and not see a positive side to it. So yeah, just leave them to it really. It’s their business.

And Congrats – you’re a MOBO (Musician Of Black Origin) award winner last year for Best Male act – how important is your your own culture and telling that story through your art? How important are cultural elements to you for storytelling, and musically?

It’s very, very important. like to put that into my music as well. Because it’s all part of who we are today, I feel like if I don’t involve that, I wouldn’t be telling the truth.

I want to touch on the ‘Only You’ freestyle, the Drake effect like that, that song went mental here and across the globe. It felt like it just took over the internet for a period. How was that experience in that and that cosign for you both personally, and for the culture?

Man it was definitely a moment for me. Because, Drake’s one of my favourite artists on the planet. In the past, before I was even making music, I used to listen to Drake’s music. So it was a moment for me – I was like ‘Wow’ – someone that I actually was listening to, and look up to and now just making music together.

That’s huge. And who’s next? Who’s the next dream of someone to collaborate with?

I don’t know haha. See what the future holds.

I’ve noticed that on Spotify man, three of your top five most listening cities are all here in Australia. What do you know about Australia? Do you have plans to come here once all this Corona is over?

Onefour jumped on the Australian remix of ‘Ain’t It Different’ – what did you think of that verse? And do you know much more about Australian Drill in general and the culture here?

Yeah, I’ve been following Onefour for a while. I think they done the song justice. And it goes off! It’s lit man. That was another moment. That was my first time ever making a song with anyone from Australia. It was lit!

What does the rest of 2021 look like for Headie One?

The rest of ’21 I’m gonna just try to find my head. I’ll be making more music. And just seeing where the world takes me initially. I’m gonna flow with the wind, and the correct energies… and hopefully it amounts to some more beautiful moments.

If you have one bit of advice for any young drillers coming up trying to make their way in this thing. What what would that be?

I’ll just tell them like, you just got to believe in yourself really. Believe in your craft and the hard work always pays off. So just always work harder than yourself each time. And literally the sky above is the limit.

I love that brother. I love that. Well thank you for your time. Great to talk to you.

My guy, great speaking to you too bro.