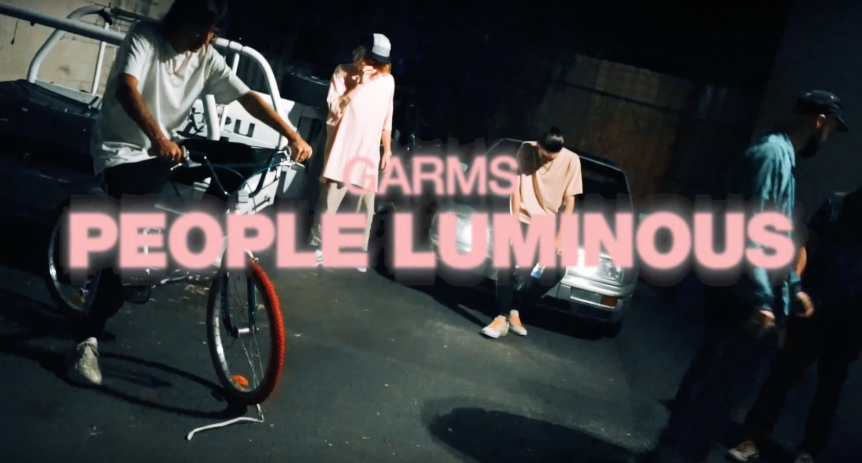 Challenging the status quo, People Luminous are back with’Garms’. We’ve got the exclusive look ahead of it’s release to the world tomorrow! 💰
A ruthless statement and call to the music scene that the collective is ready to be heard, ‘Garms’ is a thumping hip-hop track, produced by key member Matt Gray.

‘Garms’ sees the group dropping bars about designer clothing and street aesthetics, with the normal tripped out PL approach. It’s ‘Garm’ Season.
Pair that with a well shot and FX heavy video (Ace Cubes with the visual sauce), People Luminous are showing they’re a big creative force to take notice of. .

Hailing from the Gold Coast, People Luminous began their journey in 2017 when beat-maker Matt Gray returned from a European trip and moved in with rapper Nicky Swamp. Together with LGHTYR (Lightyear) and Travy P, the four form a solid bass within the collective. Fusing elements of traditional urban hip-hop with a coastal city vibe and superior digital based production, People Luminous have already received close to 140,000 views on the view for previous release ‘11:11′.

The release of ‘Garms’ also comes hot on the heels of collective member Travy P‘s collaboration with Manu Crooks and supports for the likes of Kwame and B Wise, PLUS  selling out their debut live show in a Byron Bay warehouse. Complete with dancers, futuristic visuals and bespoke forward thinking production, the People Luminous live experience is not to be missed.

On a mission to show the nation and the world that the Gold Coast isn’t just surfing, theme parks and plastic surgery, People Luminous are fostering an incredible underground culture in one of the most unlikely locations in Australia an we’re here for it 💰

‘Garms’ is out everywhere tomorrow. Check out the music video for ‘Garms’ below, Exclusively via AUD’$ today 💸