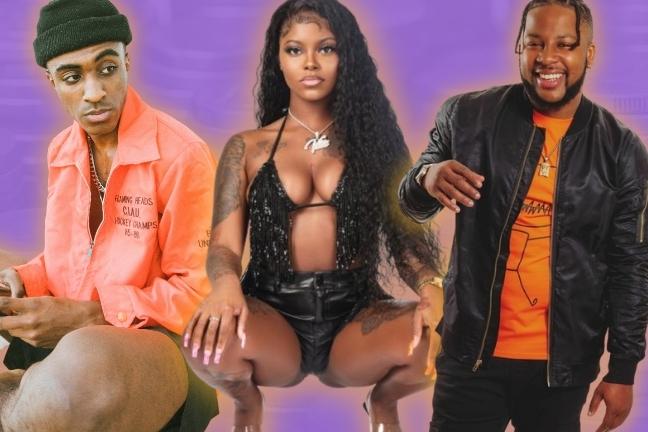 Wrapping up another handful of our favourite new tracks rising from across the globe. These emerging stars should be on your playlists right now! Keep it locked to FOREIGN EXCHANGE; your home to find new talent on the reg. Stay locked via our socials, YouTube and Spotify, and if you’re outside the AU and keen on some AUD’$ love, be sure to send us your latest drop via Submithub.

Lu Castro teams up with New York’s Connie Diiamond for the late-night vibe in ‘Nasty Girl’. The Bronx battle rapper turned mainstream dropped the new single as part of his recently released Revenge mixtape. The guitar-heavy trap instrumental finds Castro humming the track’s infectious hook and intimate lyrics before Connie delivers her own fire feature from the female perspective. Following Castro’s 2020 debut Urban, there’s only a couple of features on his 14-track mixtape but ‘Nasty Girl’ is a clean collaboration between two of NYC’s ever-great underground.

Canadian-Nigerian artist Falana shares ‘Sweet Adetola’ from her sophomore EP Rising. Living around the globe including Nigeria, Canada, the UK, Cuba, Denmark and USA, Falana’s worldly R&B and soul sound is unbounded by location. In her directorial debut, the music video features Nollywood actress Nengi Agoki as she drives throughout the night as the Afro-infused soul single soundtracks the trip. Also featured on her recent project is the previously released neo-soul track ‘Joy’, which has the title for her highest streamed song so far.

From his debut project Troy Fremont, Ontario’s Yujen shares high-energy single ‘Sheesh!!’ featuring Keysha Freshh. The Canadian artist/producer and his Toronto-based feature fire off fast-paced flows over hammering 808’s, rattling hi-hats and warping bell samples. With Siri-like sound effects sprinkled throughout, the robotic and relentless delivery of both emcees mirrors the hunger that Yujen showcases throughout his 7-track EP of sample-cut alternative hip-hop. Breaking out last year with his first single ‘Impatient’, Yujen’s already improved as both an artist and a producer, and it’s on full display on Troy Fremont.

Derrick Ju’Wan has continued with another soul and R&B offering this year in his newest single, ‘Love Language’. The track is backdropped by fantastic guitar melodies and led by the emerging Philadelphia artist’s Bryson Tiller-like vocals. Following his 2020 releases ‘Slide’ and ‘Crush’ featuring Ler Stevens, the three tracks cover his dating life through his raw vocals and heartfelt lyrics over rich R&B production. Though still only early in his career, Derrick boasts a smooth skill for storytelling and improving range in ‘Love Language’.

FACELIT FAMOUS – WHATCHA KNOW ABOUT THAT
For Fans Of: Somber Hills

Coming out of Tallassee, Alabama, Facelit Famous represents a proud South sound with ‘Whatcha Know About That’. Drawing melodic similarities to T.I and a cadence reminiscent of Andre 3000, Facelit raps over the early 2000s hip-hop instrumental in this laid-back party track. ‘Whatcha Know About That’ has some great flows and wordplay sprinkled throughout which makes for a really enjoyable track.

Picking up the attention of Republic Records with her latest single ‘Eater’, St. Louis’ Big Boss Vette releases her new self-titled single. Finding success on YouTube and Tik Tok more recently, Vette continues her hot streak this year with another new bossed-up heater. The artist’s anthem finds BBV spit boastful bar after another with her confident delivery standing out even over the blasting 808s bass and trap drums. You’ve probably already heard BBV all over your Tik Tok and it won’t be long till her presence spreads even further.

HAYDEN MARGO – IN OTHER WORDS
For Fans Of: IJALE

After a year off in 2020, Hayden Margo has returned with a trifecta of releases with his latest being ‘In Other Words’. The DC-based artist sings melodies and multis about long-distance love in this jazzy hip-hop cut. It’s that catchy and charismatic, jazz and soul-infused hip-hop that partners rich instrumentals with infectious hooks and profound lyricism. If you’re a fan of Mac Miller, or Chicago stars like Saba and Mick Jenkins, ‘In Other Words’ is handpicked for you.

CALYCO – DANCE WITH U
For Fans Of: Anieszka

UK all-female group CALYCO delivers a sweet new R&B single titled ‘Dance With You’. With their addicting melodies, the track offers plenty of potential for commercial success – especially with the recent success of Silk Sonic duo, Anderson Paak. and Bruno Mars, and their debut project. ‘Dance With You’ feels like a sunny day arriving after months of rain, their harmonies shining over the upbeat soul drums and subtle guitar and flute. CALYCO are bringing something different to London with ‘Dance With You’.

Seven-man group Vibe World Order share their latest single ‘LIFT’ from their debut album, STILL BROKE. The Union, New Jersey collection take turns going back and forth over the upbeat, grimy 808-riddled beat produced by two of the group’s members, Reg Mason and JTT. Showcasing their sharp lyricism and high-intensity flows, ‘LIFT’ also demonstrates the chemistry between each member that’s explored further on their 12-song project released in August earlier this year.