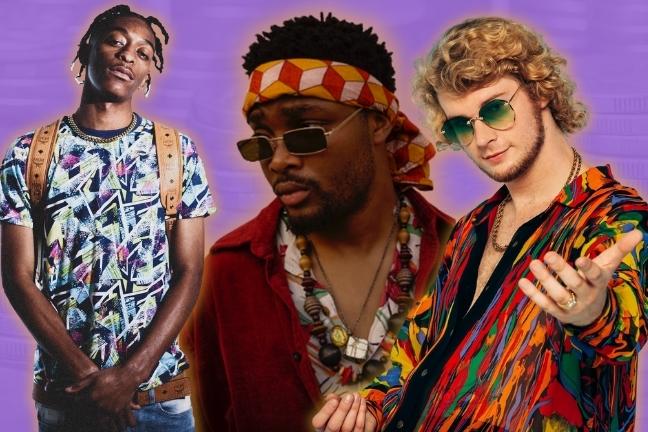 Here are our favourite new tracks rising from across the globe. These emerging stars should be on your playlists right now! Keep it locked to FOREIGN EXCHANGE; your home to find new talent on the reg. Stay locked via our socials, YouTube and Spotify, and if you’re outside the AU and keen on some AUD’$ love, be sure to send us your latest drop via Submithub.

Snowy shares an electric taste of his Nottingham style with his latest single ‘Sezzin’. Jack Dat and Frost provide the track’s headbanging grime production, matching the UK artist’s high-energy ad-libs and wordplay with their penetrating 808s dominated beat. Following the bouncy garage single ‘Reckeh’, ‘Sezzin’ sets us one step closer to his upcoming six-track EP SIRIUS where he’ll collaborate with a list of producers to showcase his versatility across each of their unique styles.

The DMV rapper Ayotemi and Cali producer Foolie $urfin team up for their spacey and swaggering ‘New Jam’. The Nigerian-American artist dropped his four-track Detour EP and a handful of new singles earlier this year with his latest track finding him flex over the spacey guitar strings and booming trap drums of Foolie $urfin’s production. With concise cadences and smooth melodies, Ayotemi speaks his future into existence on ‘New Jam’.

Andreia releases her reggae-infused debut single ‘Ka Bo Bem’ from her forthcoming first EP. The Cape Verdean artist interchanges between rapping and singing over Blaiz‘s pop-rap instrumental with an electric guitar solo by Alex Kby to close the song out. ‘Ka Bo Bem’ serves as the world’s introduction to Andreia, her empowering voice and the infectious feel-good music she has to offer.

Upcoming UK artist Bzerk drops his grimy single with help from Jon and Knwgd. He commands the listener’s ear on this track through his storytelling while also putting his versatile flow and unique voice on a pedestal. The video paired with the song takes you on a cinematic journey through Bzerk’s neighbourhood and gives you a glimpse into his life.

LA – WRONG OR RIGHT
For Fans Of: Skenzo

LA is just 19 and fresh out of London. He drops his latest single entitled ‘Wrong or Right’, where he flows effortlessly over a punchy trap wave beat, making it a catchy song and easy to vibe with. LA showcased his writing ability on this track, as it was full of substance about struggles from his upbringing, his surroundings, and personal relationships. He has a clear identity and confident presence, ensuring LA is one to watch out for in the future.

2Scratch has quickly grown a large fanbase with over 2 million monthly listeners on Spotify. As an independent artist, that’s a huge achievement. Hailing all the way from Germany, 2Scratch teamed up with Toronto veteran Tory Lanez as he continues his quest to break through into the mainstream scene. It’s a mellow party track with nice hooks and melodic verses over a catchy R&B/trap beat. 2Scratch and Tory make a good pairing on this track as they have similar styles, and this makes for a great, low-key pool party jam.

SLEEPY LEXX – 10 TOES DOWN
For Fans Of: BALLY BOY

Already an established artist in his homeland of The Bahamas, Sleepy Lexx has all the potential in the palm of his hand. He’s clearly been influenced by the trap scene in the US, with a similar beat selection to artists like Lil Durk. His bouncy single ’10 Toes Down’ sounds great in the gym and is made for the radio, and it wouldn’t be surprising if Sleepy Lexx was the first modern artist from The Bahamas to become internationally recognized.

JCZR – I GET WHAT I GIVE
For Fans Of: Asher

JCZR is already an established entrepreneur with a huge passion for music. If you imagine someone like Jack Harlow on a melodic trap song, that’s what ‘I get what I give’ is reminiscent of. On this track, he demonstrates his ability to not only rap but to sing and hold a note. There are a lot of clear influences and different genres mixed into this track which hints at the potential for a very broad catalogue in the future.

M.anifest’s new track entitled ‘Scorpio Flow’ has flows, bars, rhyme schemes and a delivery on calibre with some of hip-hop’s heavyweights. He continues to put on for Ghana and his hometown Madina through his music and his new project, with ‘Scorpio Flow’ featuring production from Drvmroll, who has also worked with Burna Boy.

NEWARK – LET IT GO
For fans Of: KILL Carter

NEWARK is definitely a by-product of the emo hip-hop wave that changed the game a few years ago, however, they’ve crafted their own unique style. ‘Let It Go’ sounds like a hybrid of 80’s pop, trap and rock, and their melodic emotional lyrics sit nicely on top. The duo display a natural back and forth chemistry evident of a long history of work together.

‘Cultivate Me’ has summer BBQ written all over it. Produced by Jon Baylor, it’s almost a house track, infused with hip hop and a bit of dancehall. The hook paired with the perfectly placed guest verses from Mickey Factz and Vic Smith makes this track a certified underground summer banger that is going to sound amazing outside when the world is back open.

YUNG GRAVY – STEPPIN ON THE BEAT
For Fans Of: 3K

Yung Gravy teams with TrippyThaKid for their bouncy new single, ‘Steppin On The Beat’. The viral Minnesota artist continues his hot streak from tracks like ‘Wassup’ featuring Bbno$ and ‘oops!!! (Remix)’ with Lil Wayne. ‘Steppin On The Beat’ simple offers almost 3 minutes’ worth of comedic one-liners and infectious hooks that simultaneously balances the line of goofy and smooth. Featuring on Gravy’s last three projects, TrippyThaKid also demonstrates seamless chemistry with the 24-year-old artist.