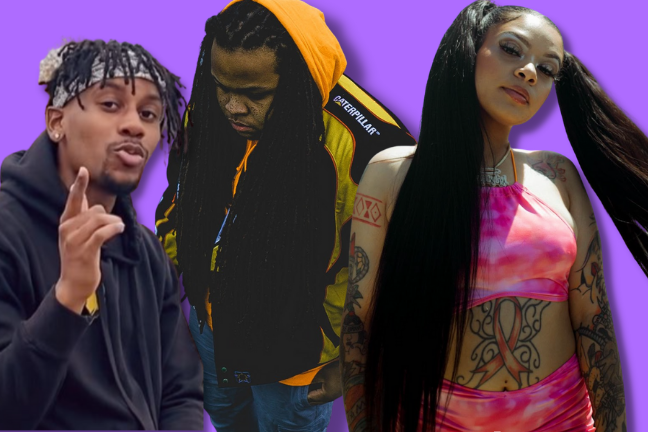 Here’s another half-dozen emerging global acts that you need to be across! From all corners of the planet, these emerging stars should be on your playlists right now! Keep it locked to FOREIGN EXCHANGE; your home to find new talent on the reg. Stay locked via our socials, and if you’re outside the AU and keen on some AUD’$ love, be sure to send us your latest drop via Submithub.

Rising R&B singer Ellie Byers unveils her heartfelt debut single, ‘Role Play’. The soft melodic ballad was written over Zoom by singer-songwriter Syon and herself during the first lockdown in the UK. Produced by David Spoils, the Surrey-based artist juxtaposes her lyrics’ poignant honesty with alluring melodies over the soothing R&B instrumental. Under its sultry surface, ‘Role Play’ is about her desperate attempts to revive a dying romance. Speaking on the track, Byers revealed “it’s about pretending to be what you think your partner needs and wants, in an effort to keep a sinking relationship afloat. Even if that means sacrificing who you really are.” While the pandemic globally stunted the music industry, many artists have refined their craft and returned with a focused vision. Ellie Byers is one such artist, with ‘Role Play’ being stripped from her upcoming EP titled Too Far Gone, slated to release later this year.

From posting covers of Drake and Frank Ocean to YouTube in 2013, Kid Travis has come a long way to establish and vary his artistry. Hailing from Bucks County Pennsylvania, the singer, songwriter and producer has been releasing original music for over 6 years and remains unmatched in his work ethic. He has garnered over 480,000 YouTube subscribers, received the tick of approval from Post Malone and even in this year alone, has dropped 10 more original tracks. One of which, ‘BANG!’, finds him with his heart on his sleeve as he realises his love isn’t reciprocated. The intoxicating guitar instrumental allows Travis to showcase his blend of punk-infused trap melodies and smooth R&B vocals. Dropping at the start of March, he’s already shared three more singles including ‘Calling Back’, ‘Violets’ and his collaboration with AJ.XO titled ‘Hold Onto Me’. There’s truly no stopping for the Groovie Gang member.

Fresh from the kitchens of Ipswich UK, Phalanx cooks up his first single of the year, ‘Chef’. Since his debut track in 2018, the young rapper has been part of the New Age Entertainment collective comprised of six artists and a producer. Named after a rectangular military formation, Phalanx manoeuvres with a cut-throat and catchy delivery over the grime production by Hitemblock. Comparing his songwriting process to cooking a meal, he sprinkles multiple culinary metaphors into his intricate wordplay. Originally debuted on Switchside TV’s Freestyle Fridays earlier this month, ‘Chef’ is the entrée to what the self-described ‘Wordplay Wizard’ has to offer in 2022. Featured on popular YouTube channels like Link Up TV and JDZ Media, his output continues to increase every year and fans can expect a buffet of fiery offerings from Phalanx in 2022 as he rises higher among the ranks of the UK scene.

Red Spade and Efua combine for a catchy, melodic and relationship-themed track titled ‘Won’t Say’. Red Spade is 25-years -old from Delaware and has been perfecting his sound within hip-hop for a minute now. As well as singing and rapping, he also produces, with his entire brand being focused on individuality and staying true to yourself. He cites Big Sean and A Tribe Called Quest as some of his biggest influences, and you can hear that in ‘Won’t Say’. He adopts a Big Sean-inspired flow and you can hear A Tribe Called Quest through his instrumentation choices on the track. The title ‘Won’t Say’ is inspired by the questions you ask yourself about trust in a relationship, and if your significant other will stick around if you say the things you usually ‘won’t say’. Enlisting fellow Delaware artist Efua, it’s a relatable track filled with poetic storytelling and a soulful hook.

New Orleans may have a stake in the next wave of female hip-hop artists with 504icygrl. Breaking onto the scene in 2019 with her bombastic ‘9am’ debut, Icygrl kept the pressure applied for her 2020 Zazaland project. While she was quiet for most of last year, it was for good reason. Having moved to LA and with the tools at her disposal to prosper in the music industry, she recently released Princess Diaries. On her latest single ‘Pharmacist’, she possesses a sophisticated flow and displays extreme confidence in the short bouncy trap offering. You can almost immediately notice her New Orleans roots in her approach to the song, which draws comparisons to Tee Grizzley. Although not a huge name just yet, the 24-year-old has done well to establish herself throughout the South and it doesn’t seem a far fetch to suggest she’ll be making serious waves for the rest of 2022.

It’s not often you find an artist quite like the 16-year-old artist Lucid Kidd from Lithuania. Heavily influenced by pioneers of modern melodic rap like XXXTentacion and Juice WRLD, he started making music and performing at 13-years-old alongside friend and collaborator Lil Skar. Growing up in Eastern Europe, Lucid Kidd expresses a unique perspective on life with the cold and winters fuelling his darker soundscape. Accompanied by a music video directed by Michael Russell, he performs his melodic raps over the guitar-led trap instrumental of ‘G n T’. The young rapper based the track “on the idea of being at a party or a show or somewhere you should be communication and having fun but your emotions take over and make you feel unwanted.” Lucid Kidd’s forthcoming debut EP will include previously released joints like ‘Nothing Back’ and ‘Today n Tomorrow’ and feature Corey Chorus, as well as production credits from Fast Life Beats and Ikenna Funken.