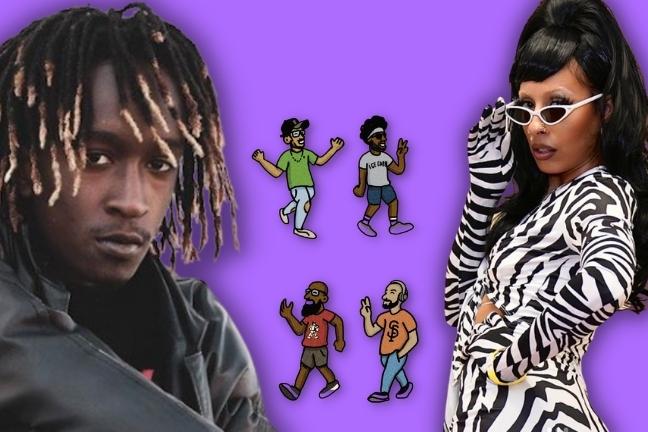 Californian-based collective UglyFace debut the new year with an autobiographical single, ‘The Coast’. Paying homage to their West Coast roots, with the 90s inspired hook dividing each rapper’s verse over the jazzy hip-hop instrumental. Consisting of Kevin Farpella, Aaron Temple, Aric Jones and Andre Mosley, UglyFace have been making music together for a while with an automatic quotable reflecting this – “I worked the last ten winters for a summertime crib”. After an extended hiatus that saw them chase their individual careers, last year saw the collective reunite to release ‘Without You’ featuring Travis Walker followed by a string of singles. ‘The Coast’ sees each emcee detailing their previous relationships and mental state during that time, all while packing every couple of bars with LA references. The smooth and catchy hook transports listeners right there in the backseat of a Cadillac, blissfully riding around somewhere in Cali. For fans of Cordae and Saba, UglyFace embraces a summery aesthetic across every track with heightened attention to detail for storytelling and woozy melodies. After a busy 2021, the collective look to be gearing up for a debut project together with ‘The Coast’ being their seventh release over the last year.

‘OKAY!’, Kenyan prodigy KayCyy just released one of the most interesting tracks of 2022 so far. Produced by the reputable Gesaffelstein who has worked with the likes of The Weeknd and A$AP Rocky, this collaborative effort is a constant build towards a peak that intentionally never arrives. Coming off the hype of his involvement with Kanye West’s DONDA last year, the 24-year-old has become a familiar name in the underground and behind the scenes of the hip-hop world. However, he’s been doing this for a while and deserves a lot more plaudit than he receives. With writing credits for artists like Lil Baby, Lil Wayne, Travis Scott and of course, Kanye West, it’s only a matter of time before KayCyy blows up. He’s got his own unique, clean sound and has an effortless ear for melody. His ability to rap and sing at a high level as well as having the incredible production behind him make his music so enjoyable.  He keeps pushing boundaries separating himself from his peers, and ‘OKAY!’ is a perfect example of this. After dropping two albums in the last two years, 2022 looks ever so bright with incredible names rumoured to be working alongside him as another album nears.

LEXY PANTERRA & TRINA – BOOTY ON HER

Lexy Panterra shares her sultry new collaboration ‘Booty On Her’, featuring legendary Florida rapper Trina. Raised in Sacramento, the Persian-American dancer and artist debuted in 2015 with the electronic and dance track, ‘Lit’. Steadily exploring fun club hip-hop singles and slower, emotional ballads, Lexy looks to show a more complete and polished display of her artistry in the upcoming album, Sex, Money & Love Songs. ‘Booty On Her’ is the first taste from her sophomore project and is accompanied by official album art from French painter Lionel Thomas. The salacious single boasts infectious Dutra-produced drums of which the two artists deliver explicit lyrics in their respectively alluring flows. Noughties icon Trina makes her entrance rapping – “This booty ‘gon bounce his ass to sleep, a TKO. In the streets I’m classy but at home, I’ma freak.” Panterra knows how to hold her own on tracks alongside heavy hitters having collaborated with the likes of DJ Snake, Too $hort and Lil Yachty. Streaming numbers would’ve taken a healthy rise after Valentine’s Day earlier this week, with ‘Booty On Her’ joining playlists among the ranks of those on top of the subgenre, including Cardi B, Megan Thee Stallion and Nicki Minaj.

SLOUCH ONLINE – GET IT & GO

Los-Angeles based artist Slouch Online begins 2022 by chasing his dreams on the new record ‘Get It And Go’. The 27-year-old shared his 10-track debut project SUPERBRiGHT last year, alongside the two croon-heavy singles ‘Skelly’s’ and ‘This Is All Just Part of the Show’ via Mammal Sounds Records.With his laidback, nearing on lo-fi production, Slouch’s whimsical vocals draws influence from artists like Kid Cudi and Joji. As a hot spot for all creative opportunities, the alt-R&B and hip-hop artist explores his relationship with the Californian city. Speaking on the self-produced single, the Colorado-raised musician stated “this song is about moving to LA in hopes of getting in and out as soon as possible.” ‘Get It And Go’ features an encouraging and repetitive hook that finds Slouch delivering a motivating mantra to both himself and listeners – “I can’t be known as a joke, I got to get it and go.” Flexing his melodies and vocal range in the final moments of the track, Slouch Online is someone who continues to evolve with every release.

Reekado Banks enlists fellow Nigerian Fireboy DML for the remix of his 2021 single, ‘Ozumba Mbadiwe’. Bursting onto the scene in 2014, Banks has earned his title as one of Africa’s most exciting hitmakers and creating an entire Remix EP around this single is definitely evidence of that. Produced by the Grammy Award-nominated P.Priime, the track is titled after the expressway in Lagos where peaceful protesters were massacred in October 2020. Beneath the lush piano chords and afro-infused pop melodies is the reflective lyricism and powerful social commentary of both artists. Speaking on the track, Banks stated “I was one of the protesters at Lekki Toll Gate before I had to travel, so the massacre at the Toll Gate cut deep for me, because it happened less than 48 hours after I left, and I just can’t shake that feeling.” Marking what’s rumoured to be the first of many collaborations, he teams up with the rising melodic star Fireboy DML who is coming off a mammoth 2021 with his ‘Peru’ hit and its subsequent Ed Sheeran remix. Kicking 2022 with another rendition featuring 21 Savage and Blxst and now ‘Ozumba Mbadiwe’, the 26-year-old is definitely a name to watch as the Afrobeats scene continues to explode.

LAYA starts 2022 off strong by releasing her braggadocious and catchy R&B track ‘Brag’ with the help from fellow New York native Fivio Foreign. The Staten Island born artist isn’t one to be put in a box, accrediting herself as a creative director, producer, writer, visual artist and of course, a promising R&B act. Displaying extreme confidence on the mic and sliding across the track with her reverbed vocals, LAYA talks about her self-worth and the heights she’s climbed already. Unapologetic as ever, LAYA taps Fivio for a feature verse, arguably the hottest artist in NY right now who seemingly has the Midas touch as of late. The home of hip-hop has seen a huge revival in emerging acts over the last few years and with different artists like LAYA on the brink of blowing up, it certainly doesn’t seem like their dominance is stopping anytime soon. The track is paired with a yearbook and prom-themed music video that she shot on her iPhone in her apartment. Recently signed to Warner Records, LAYA will be rereleasing her Um, Hello EP and working on more collaborations in 2022 – one to keep an eye on.