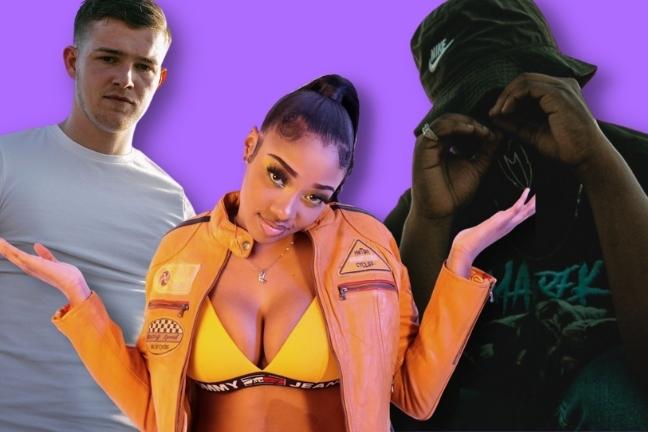 FRENCH THE KID – MAKE IT OUT

Essex essential French The Kid announces his debut mixtape with new single, ‘Make It Out’. It’s been full throttle for the English-born, French-raised artist since he debuted in 2019 with ‘Bella Latina’ – appearing twice on the Daily Duppy series, building a cult-like following and kicking off 2022 with the mesmerizing ‘Remedy.’ The 21-year-old artist jumps on the poignant piano-led drill production of Lovelife, switching between bilingual melodies and bars on ‘Make It Out’. Directed by Teeeezy C, the music video takes us through French’s neighbourhood in Harold Hill and life before the music as he raps about his unbroken loyalty – “You aint loyal g just post all these quotes bout loyalty.” Stripped from his upcoming debut mixtape Never Been Ordinary set for release on April 1st, the single proves the album’s title.

OTIS FONDE – GONE TOO MUCH

Otis Fonde starts 2022 with a celebratory new single, ‘Gone Too Much’. Growing up in the countryside of Virginia, Fonde’s love of music was sparked by his father who worked as a DJ. Embracing the grind as an artist, he dropped his first project Decatur Blvd in 2018 followed by two new mixtapes in the consequent years after. Taking a year off in 2021, Otis Fonde has bounced back with his latest full-length offering, Clarity. ‘Gone Too Much’ is the project’s second track and samples Mariah Carey’s ‘Emotions (12” Club Mix)’ whose vocals ring throughout, similarly to Drake’s ‘Emotionless’ both in sampling and triumphant yet introspective lyricism. Bringing a great presence to the mic, he energetically glides through different cadences rapping unapologetically about his come up – “I became who the f*ck that I had to be.” The 11-track project remains featureless aside from the ‘Dholla Interlude’ and showcases more of his vivid storytelling and soulful bar-heavy sound.

In her sophomore year, up-and-coming Birmingham artist Wohdee drops her confidence fuelled track entitled ‘Wauww’. Off the momentum from last year with the UK R&B singles ‘Vain’ and ‘LIDL’ featuring JY MNTL, Wohdee’s freshest offering sees her dip into the drill scene for the lead single of her upcoming EP. ‘Wauww’ portrays Wohdee’s extreme confidence in herself as she hits the perfect pockets with her slick lyrical ability and flows in the Jacques Charles-produced track. The new single is paired with a music video directed by Leon Matthews, whose shooting credits include the likes of Stefflon Don and Tion Wayne, via UK’s one-stop spot for visuals, GRM Daily. Expanding her sound and adapting the catchy flows of the drill genre, ‘Wauww’ highlights her undeniable potential set to be shared with the world later this year.

Nigerian French-Canadian R&B artist shares her TÖME shares her self-titled single from her third studio album, LÖV. After embarking on her career as early as 2019 with her debut project TomesRoom: Chapter 1 – she’s come leaps and bounds, notably collaborating with Sean Kingston on a JUNO-award winning track in 2021 and finally to her latest ten-track album featuring Mozambique trio Yaba Buluku Boyz, Nigerian hitmaker Skales and Atlanta singer, JSol. The latter can be found on ‘TÖME’ delivering his smooth vocals on the R&B and Afrobeats-infused romantic ballad while the leading lady demonstrates her sweet melodies and affectionate lyricism. LÖV, abbreviated for Love Over Vanity, includes production work from big names like Shizzi, Michelin Shin, LT Moe and Legundury Beatz. The Kiza Music signee has had an impressive couple of years, surrounding herself with a diverse range of creatives and garnering global critical acclaim.

West London’s own Junes LB shares ‘Balmain’ featuring JayTrill, his latest contribution to the UK’s fast-growing trap scene. At a young age, Junes was exposed to musicians like Bob Marley and Erykah Badu, gravitating to their sense of melody before becoming heavily influenced by US trap artists like Lil Durk and Chief Keef. It took Junes a while to discover UK music for what it was but with age, he came to appreciate it. Beginning to rap at the age of 14, he soon drew inspiration from the UK trap and drill sound. ‘Balmain’ is the first instalment of his collaborative debut five-track EP, SNI-Relevant. His smooth cadence slides over the ambiguous trap beat, immediately making you bob your head. “Scared money don’t make no money” is a line that rings out, as Junes talks about his come up and the changes in his lifestyle as he started to be more financially secure.

Texas-based artist J’Moris returns to 2022 with ‘Too Spicy’ and his sophomore album, Moris Better: Loveless Confessions. Debuting in 2016 with Moris Better: The Hangover, J’Moris’ style has always been oozing with the southern confidence and grit of the local scene. Fast forward to his latest release and the precision in which he delivers this swagger has become even sharper. With the majority of the album produced by Supamario Beats, ‘Too Spicy’ is a bouncy trap record that finds J’Moris slick talking in his bars and referencing southern heavyweights in the track’s hook – “I’m too spicy baby, Gucci Mane ’05, I’m so icy baby.” The 14-track project features guest verses from D. Hewitt on ‘Fall Thru’ and 254 Assassin, The Composer and Four000 Units on the posse-cut ‘Wanna Ball’. On ‘Too Spicy’ and Moris Better: Loveless Confessions, J’Moris is “a ladies man, a street-wise storyteller, the life of the party, and someone not to be toyed with.”