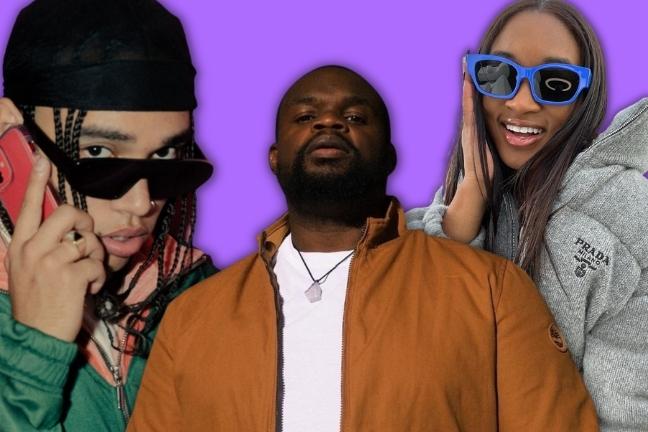 Toronto native Dom Vallie delivers his fiery new single entitled ‘BEEN HIMMA’. The 20-year-old was born to be in the creative industry, with close relatives being involved in film and arts leading him to an introduction into self-expression at an extremely early age. From recording his first song in his early teens to the many sleepless nights it took to grow as an artist, Dom Vallie has well and truly arrived. Alongside Dom, the talent on display coming out of Canada has grown to an elite level. ‘BEEN HIMMA’ describes his come up, detailing the promises he made to his mother, and the lessons he took from certain situations in life. On top of this, it’s a flow clinic. The track is full of distorted bass and paired with Dom’s casual yet energetic cadence, as well as some comedic sampling of Danny McBride from the film This Is The End.

LA-based songwriter, producer and multi-instrumentalist artist Khamari releases his soft and intimate new song, ‘Doctor, My Eyes’. Produced alongside Trackside and Johan Lenox, ‘Doctor, My Eyes’ is an introspective and emotional single about feeling life’s weight become too much and losing self-awareness. With his alternative R&B vocals creating rich textures throughout the soft guitar plucks and subtle bass drum of the track, Khamari adds a touching outro of his grandfather giving advice, someone who’s always been an anchor for the musician. The mellow tones of the single’s production and his lyrical vulnerability strikes a similar nerve to that of SZA, turning even the most personal and poetic lyrics into catchy anthems for those stuck in their “20-somethings.” It’s been two years since his summery and upbeat R&B debut EP Eldorado, and while the thematic struggle in relationships and life remain, the Boston-born artist welcomes a change with ‘Doctor, My Eyes’, diving deeper into these personal reflections and relying heavier on his improved silky melodies. Names like Frank Ocean and Kid Cudi come to mind of those few who can evoke such a feeling of warmth and hopeful despair in a song and now, Khamari looks to join that list with what is hopefully a big return in 2022.

Philadelphia-based Ivy Sole ushers in their highly anticipated album Candid with a vibrant new boom-bap joint, ‘Call Me’. Don’t be fooled by the bouncy tone of the third and final single from Candid, ‘Call Me’ is a vibrant yet vulnerable soulful hip-hop cut produced by the non-binary artist and Ethan Thomas. Told from the POV of their stepfather and Sole themselves, the 25-year-old showcases an impeccable cadence and resounding confidence with the hook summarizing their relationship – “Call me, so I can make excuses for ya.” An accompanying narrative podcast titled CANDID Radio will be released later in February, further shaping a world around the 14 track LP by exploring the deeper stories behind it and chronicling Ivy’s process in creating the project. Candid tells Sole’s parents’ love story through each of their perspectives and her own, as they navigate through themes of violence, addiction and community. ‘Call Me’ is out now, released independently via Les Fleurs Music alongside previous singles ‘One More Night’ and ‘Dangerous’ in Ivy Sole’s third album.

JED is a young up and coming rapper from Brighton, England. The 21-year-old has been involved in music for a few years but only started to take his own craft as an artist more seriously last year. He started releasing weekly freestyles which helped him grow confidence in his ability and served as a showcase for what he could do on the mic. Over the last year, he’s released four singles, with ‘Gin N Tonic’ originally coming out last August. In what could be seen as a British twist on Snoop Dogg‘s iconic ‘Gin N Juice’, JED comes onto the house/grime track with extreme confidence and presence. His ability to create a mood and ride a beat is impressive, reminiscent of the energy Aitch delivered when he first entered the scene. JED isn’t one dimensional, displaying his capability to switch up his flow and create melody effortlessly on ‘Gin N Tonic’.

NIJA – YOU DON’T LOVE HER

Nija releases her new self-assured single ‘You Don’t Love Her’, released via Capitol Records on her debut project, Don’t Say I Didn’t Warn You. The Grammy Award-winning contributor is known for her song writing talents but with her first album out now, Nija now stamps herself firmly at the forefront. The 23-year-old’s powerful R&B vocals sing over the bouncy 808s and hip-hop drums as Nija delivers a no nonsense performance. In ‘You Don’t Love Her’, Nija fires smooth melodies and brash lyricism toward her ex-lover, singing in the chorus – “I know you just cuffed her, tryna fill a void ‘cause it aint me.” With song writing credits for the likes of Beyonce and Cardi B, her strongest asset is clear. However, Nija effortlessly slides into the spotlight across the 10 tracks on her latest work. Speaking on DSIDWY, she says, “There’s vulnerability in the music but it’s a different approach. Instead of, ‘Oh you hurt me,’ it’s like, ‘Damn you did that to me? That’s crazy. I’ma move on but you fucked up for that.’”

From his debut album, SON OF IMO, the Cali-based FII3RD showcases his refreshing R&B/afrobeats fusion on ‘Come Home’. He made his debut as an artist back in 2017, and has had significant success in his home country of Nigeria, as well as having some viral moments on social media over the last year. In 2022 he’s already made strides, announcing his signing to the Afrisounds, who are home to the next generation of hip-hop, R&B and afrobeats’ in the UK. ‘Come Home’ is the 4th track on the album and infuses his afrobeats sound with some smooth, mellow R&B melodies that make it the perfect song to play in any relaxing environment. Immediately, he draws similarities to Burna Boy but with T-Pain like melodies and harmonization. With afrobeats on the rise, FII3RD certainly has the capability to become the next leading artist within the R&B/afro space.